10 Best NBA Players of All Time

Their individual and team achievements made them legends of the basketball

by Gazettely Editorial
in Sports, Basketball
Reading Time: 7 mins read
A A
0 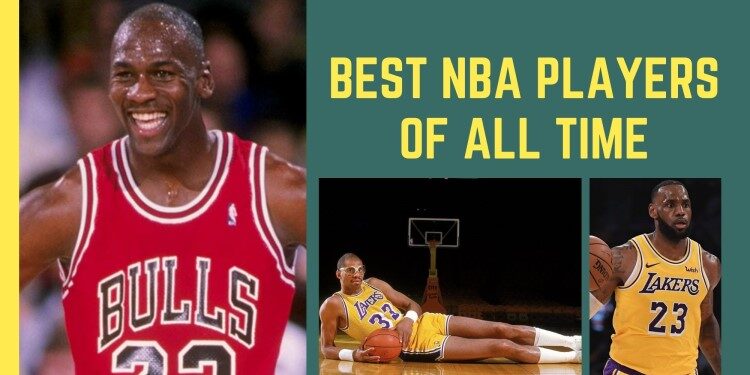 Who are the best NBA players in the history of the basketball? With legendary teams like the Los Angeles Lakers and the Boston Celtics, the NBA has a very rich history. Some of the best basketball players in the world have been playing in this league for over 70 years. Legendary battles like Bill Russell – Wilt Chamberlain, or legendary players like Michael Jordan have made basketball so popular all over the world.

However, it is always hard to distinguish between players who play different positions and have played in different eras. Not only statistics and titles won but also the influence of the player on the game and even on basketball in general are important factors to take into account in this ranking. Now, let’s see the 10 Best NBA Players of All Time. 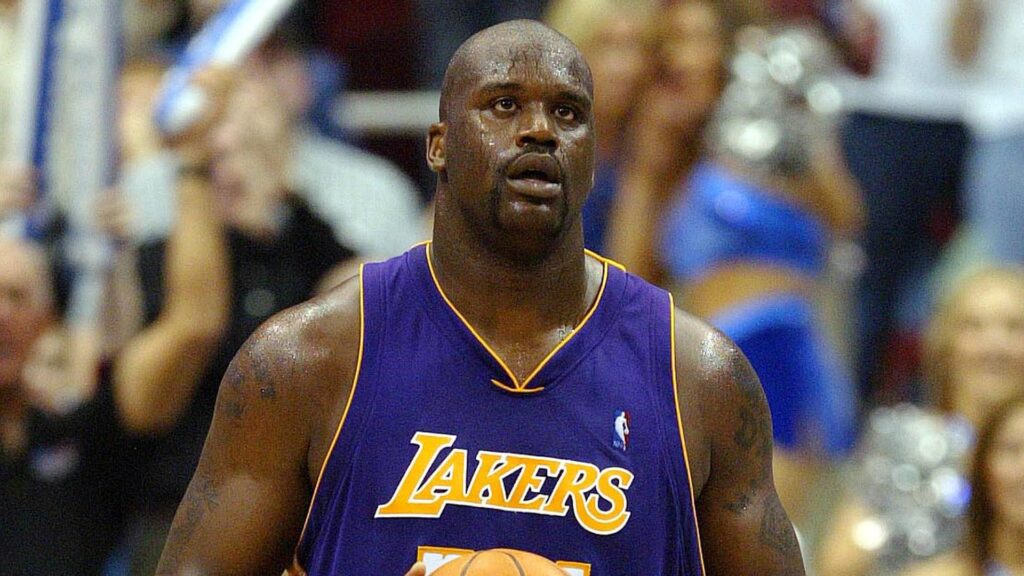 Shaquille O’Neal was one of the most dominating players of his generation, perhaps even of all time. At 6’4″ and 147 kg, his body is very impressive. For a player of his weight, his power and agility are almost unstoppable for a defense. The only weakness of him was his free throws, which he managed to improve over the years.

“Shaq” guided the Los Angeles Lakers to three consecutive NBA titles in the early 2000s. Moreover, he was elected MVP of the finals during the 3 wins. O’Neal won a 4th NBA title with the Miami Heats a few years later, before moving on to Phoenix, Cleveland and Boston at the end of his career. 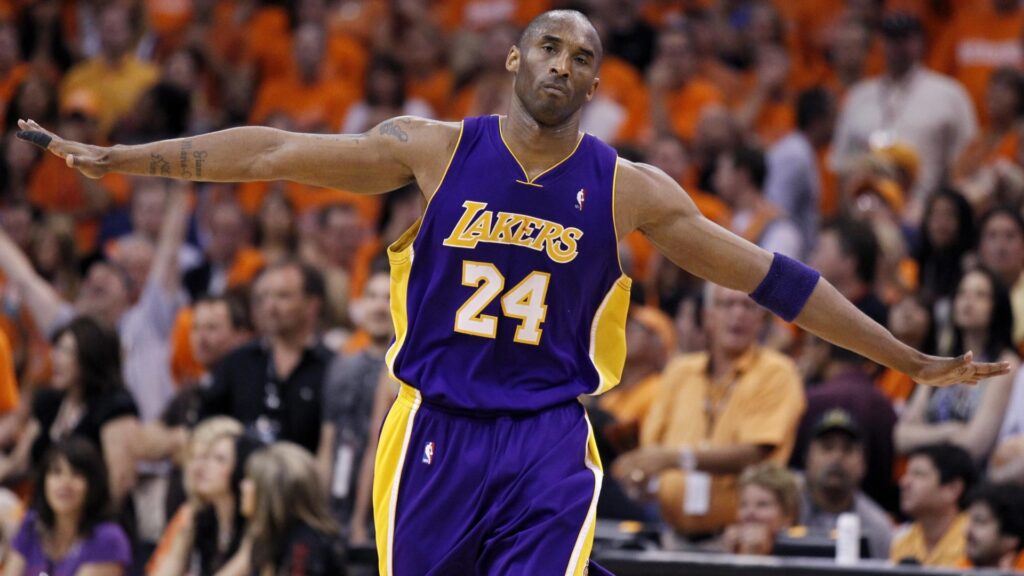 There is nothing to say about Kobe Bean Bryant that has not already been said in recent times. Selected in the 13th position of the 1996 draft, he is regarded as one of the best players -if not the best- of the most important franchise in the history of the NBA and one of the most important in American sports: the Los Angeles Lakers. He held a regular season MVP, was the fourth-highest scorer in history and has the second-highest single-game scoring total with 81 points, second only to Chamberlain’s 100.

Moreover, Kobe is the only player with two retired numbers in the same team. Kobe won five NBA championships, all with the Lakers, and together with Shaquille O’Neal, he formed one of the best duos the NBA world has ever seen. 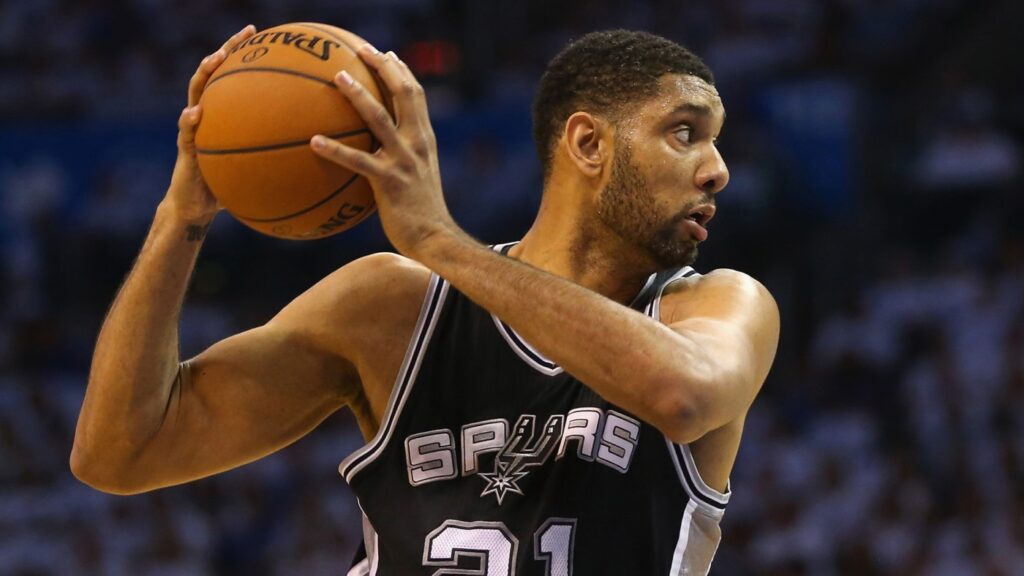 Tim Duncan comes in the 8th place in our list of best NBA players of all time. The Virgin Islander was a five-time champion with the San Antonio Spurs, in which he played his entire career. Furthermore, he won two regular season MVPs and three NBA Finals MVPs. Moreover, he is the only player to win championships in three different decades.

He also studied psychology and, curiously, in his adolescence he became one of the best swimming prospects in the Virgin Islands, but a hurricane destroyed the only swimming pool in his town, and he had to turn from water to the orange ball. The rest is history. 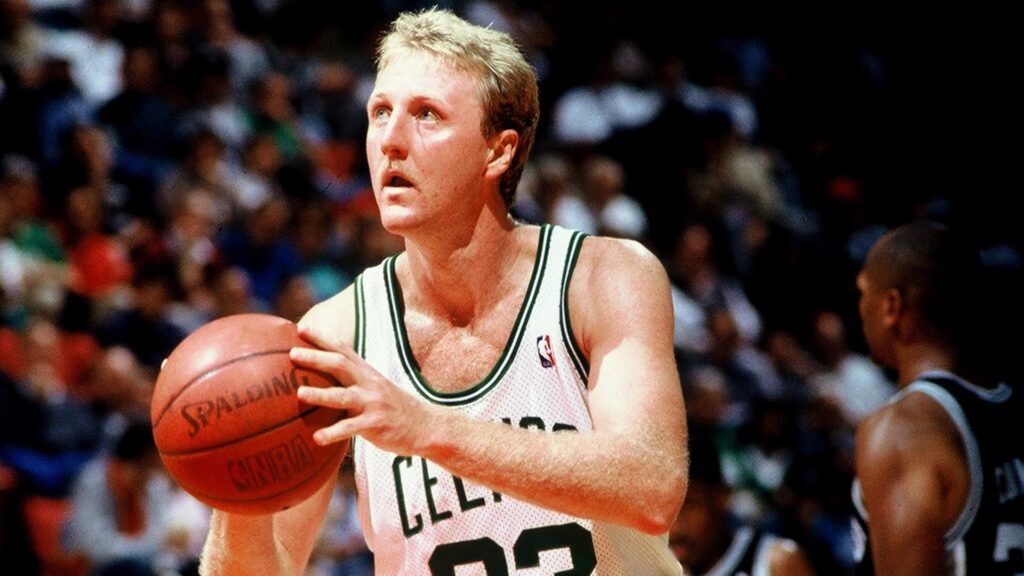 Possibly the best white player in history of NBA. He shaped his career from college and his confrontations with Magic Johnson. The 33-year-old Celtics player, whose Twitter social network owes its logo to, won three championships with the most successful team in history. He was part of the second trio with the most wins in NBA history -Bird, Parish, McHale- only surpassed by Duncan, Parker and Ginobili.

Winning three regular season MVP’s, he is the only human being on earth with the following achievements: Rookie of the Year, regular season MVP, Finals MVP, All Star Game MVP, Coach of the Year and Manager of the Year. Not sure if he will have room in his house for that many awards. He will be remembered amongst the best NBA players of all time. 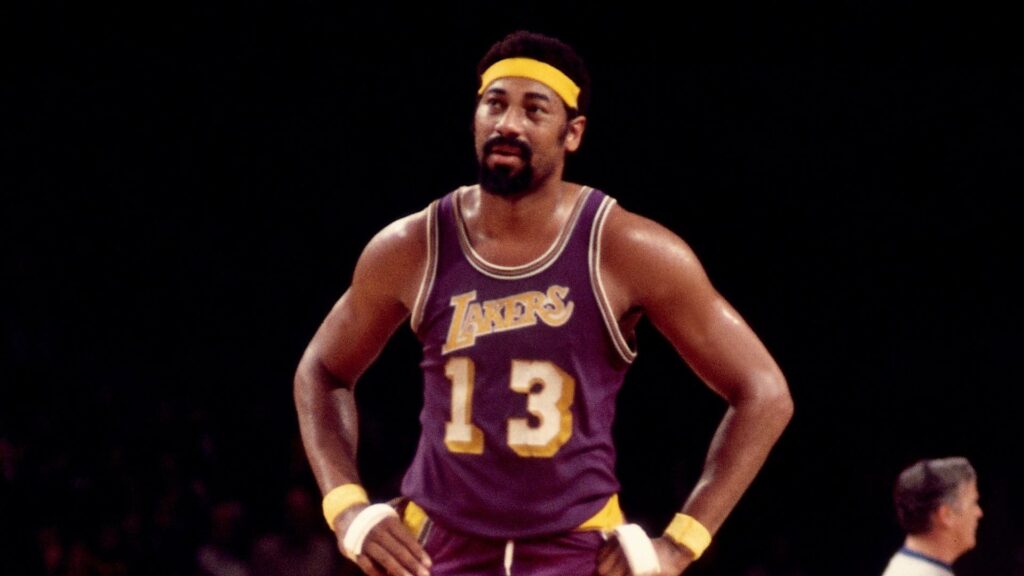 Chamberlain has always been credited more for his individual stats than his team stats. And why wouldn’t he be? While he retired from basketball in 1973, Chamberlain is still the holder of more than 70 NBA records, among them scoring more than 100 points in a single game. He also averaged at least 30 points and 20 rebounds per game in a season. No other player was able to do so in the history of the NBA, and Chamberlain did it seven times in a row.

Chamberlain was NBA champion twice (once with the Sixers and once with the Lakers) and was voted MVP in one of the Finals. In addition, he won the season’s Most Valuable Player award four times and was a member of the league’s Best Five on seven occasions. 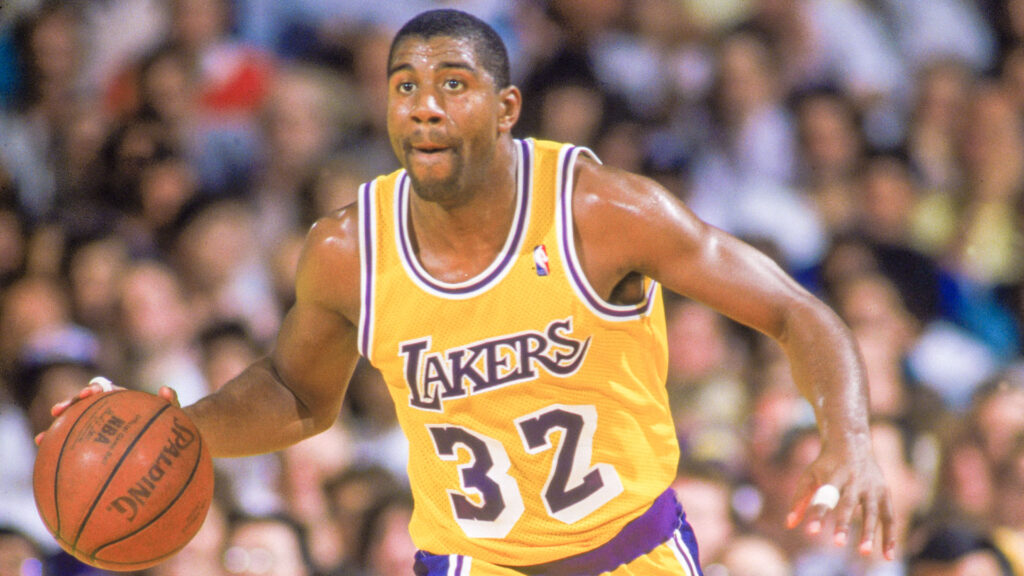 The best friend of the NBA. The Lakers’ Showtime leader in the 80s. A five-time champion of the NBA, NCAA champion with the University of Michigan and recognized as the best point guard the sport has ever seen. A 2.06 giant who played the one. Complete madness. He had three regular season MVPs, three All-Star Game MVPs and led the league in assists four times, but had to retire in 1991 after he contracted AIDS.

However, the crazy Earvin was not deterred and in 1996 he returned to the Lakers for a brief period of time, delighting the crowd in an All-Star Game by setting a bomb and running out of the pavilion. A real cute freak. Many regard him as one of the best NBA players of all time. 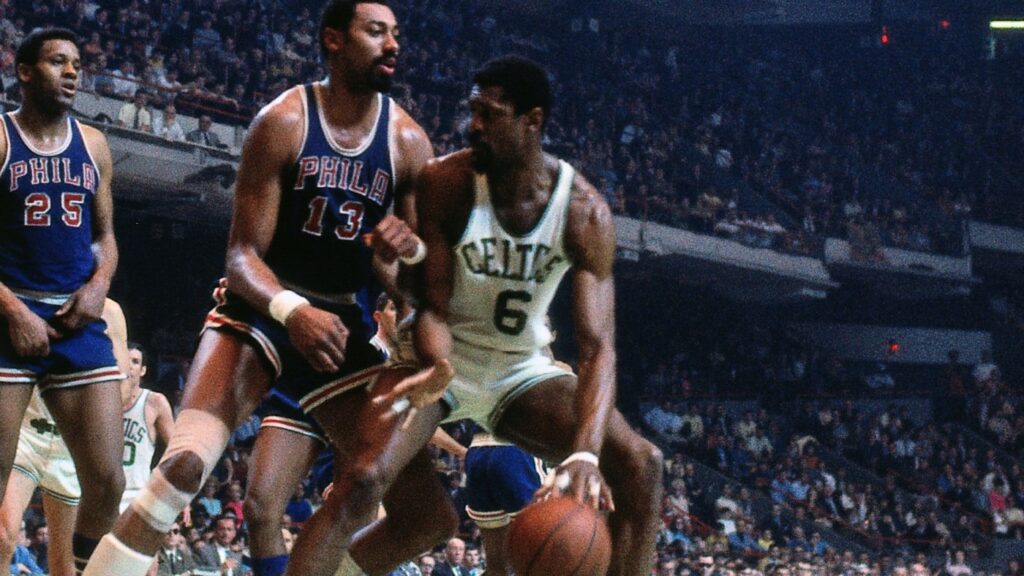 The Lord of the Rings, also known as Bill Russell. With 11 NBA championships, he was widely regarded as the best defender the sport has ever seen. He was chosen MVP five times, top rebounder in the league four times and held the record for having held off Wilt Chamberlain the most times. Legendary Bill played in the Finals ten years in a row, winning eight championships in a row, making what is now known as the best league in the world a real mess.

Anyway, the “6” of the Celtics is the main reason why the Massachusetts team is the most winning team in history. In spite of all his achievements, he could not avoid being a motive and suffering many acts of racism in that city, but that story will have to be told another time. 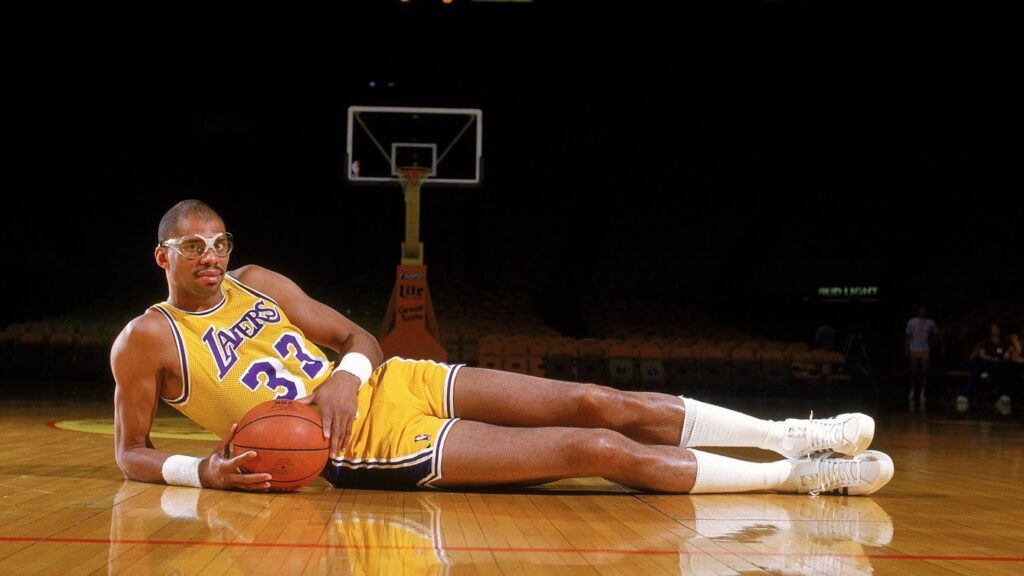 Before Michael Jordan existed, there was Kareem Abdul-Jabbar. As the third in our list of best NBA players of all time, Kareem is the all-time leading scorer with more than 38,000 points. Former Lew Alcindor and current Kareem holds the record for most MVPs with six, in addition to being the guy with the most minutes in NBA history and the best hook shot in the history of the sport. In addition, he played in the All-Star Game 19 times and was cheered and honored in all the courts of the League in the year of his retirement. During his last game and from a throne in the middle of the court, he was asked about the best player he ever faced in a basketball court.

Waiting for him to name an NBA icon, reporters and the general public were surprised to hear “Earl Manigault,” a well-known street player. Perhaps this answer showed his particular way of seeing life and his lack of contact with the press, which he avoided throughout his career. He will always be remembered as one of the best NBA players of all time. 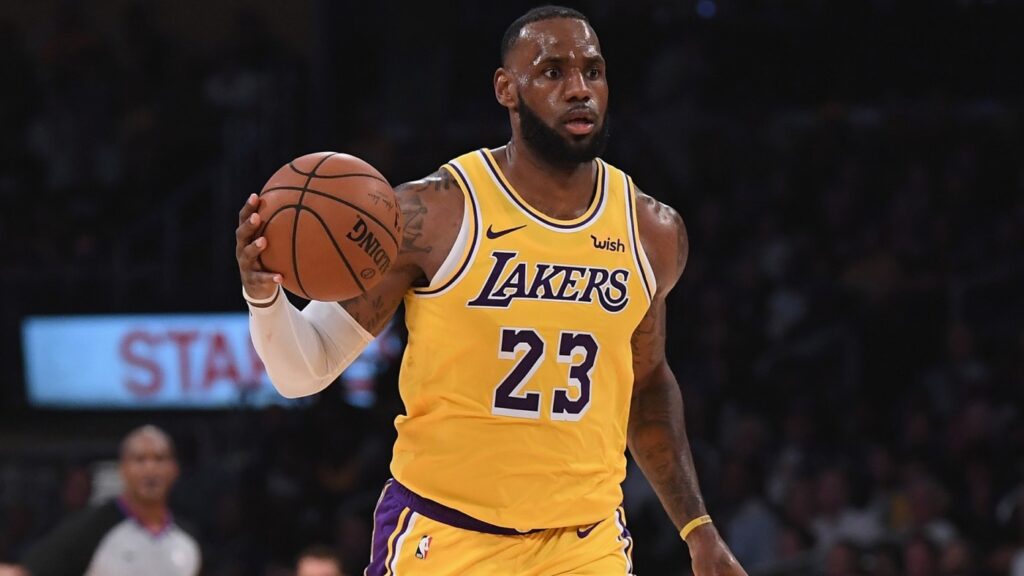 Even to this day, there are still comparisons between LeBron and the number one on our list of best NBA players of all time, when you could put all that aside and instead simply enjoy James’ extraordinary talent for as long as he continues to play in the NBA. At 36 years old and wearing the Los Angeles Lakers jersey, he has certainly done enough to be considered one of the best of all time.

He has won three NBA championships in his career (two with the Miami Heat and one with the Cleveland Cavaliers) and was voted MVP of those Finals. Additionally, he has four Most Valuable Player awards and was a member of the NBA’s Best Five 12 times. Furthermore, he has the impressive record of having played in nine consecutive Finals, between 2010 and 2018. And he can still keep on winning titles and awards! 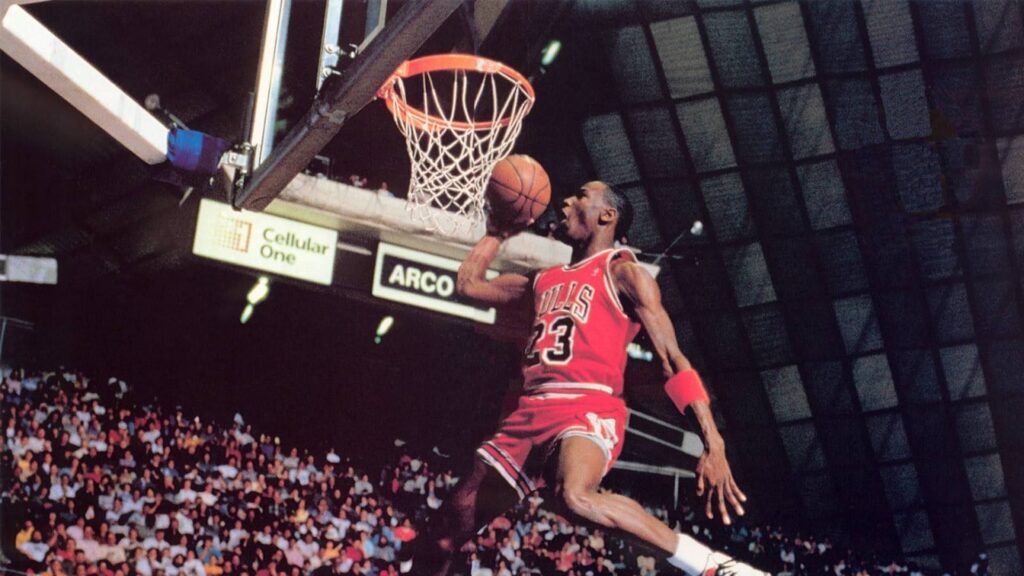 Was there ever any doubt? He is not only the greatest basketball player of all time, but also one of the greatest athletes in history of sports. Some believe that the Bulls would have won eight consecutive titles had he not left the league for two years between 1994 and 1996.

With six NBA championships and MVP awards in each of those Finals, and five Most Valuable Player awards for the season, Jordan’s achievements throughout his career are just a few of his greatest accomplishments. To top it off, he was named to the NBA’s Best Five from 1987 to 1993 and from 1996 to 1998, and to the Best Defensive Five nine times.

Do you know any others who deserved a place in our list of 10 best NBA players of all time? Let us know in the comments section below.

What is Energy in Science? 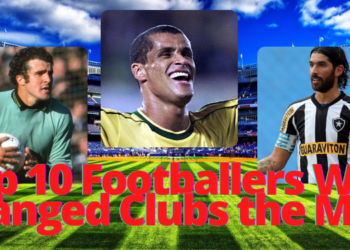 All About the Best Haircare for Men