by Gazettely Editorial
in Cryptocurrencies
Reading Time: 5 mins read
A A
0 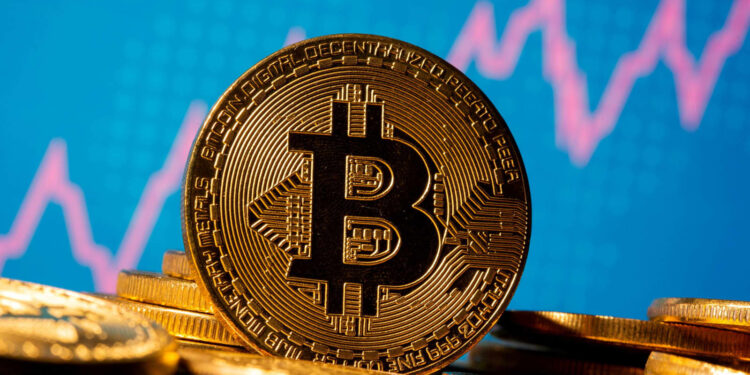 A few days ago, we discussed the possibility of a slow movement of consolidation which would enable us to recover from the downward movement of the start of the month. We identified a number of interesting areas for our analysis and today we will take stock of the situation.

The weekly close yesterday was at $46,700, and within the area we believe we should hold. We can observe that it is a high interest area and the price of Bitcoin (BTC) is relaxing there. There is no need to panic for the moment, although the price has declined slightly, it has not yet dropped any significant points. Although we have a bullish medium-term view, it is important to watch how the price is organized in order to understand where we are. 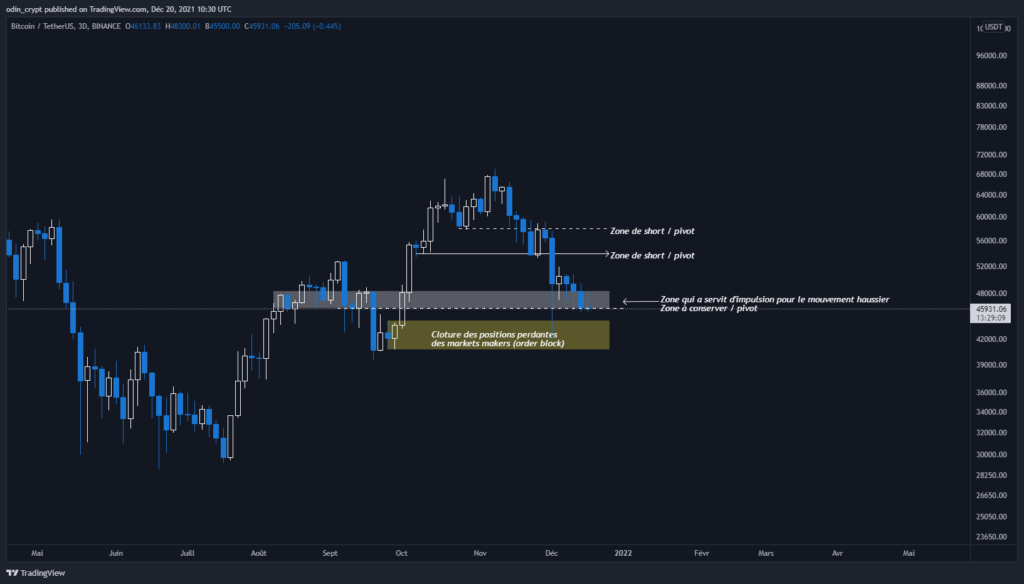 As a bearish trend is defined by lows and highs which are lower than the previous ones, we can definitely witness this phenomenon on the price at the moment. We compared the same pattern that brought the price to break the $50,000 support. The picture is slightly different, however, and the context is quite clear.

Bitcoin (BTC) is currently on a major point which it had to retest. If we lose this point, the macroeconomic view will change. Therefore, this would initiate a completely different momentum that we had not seen since the beginning of 2020. 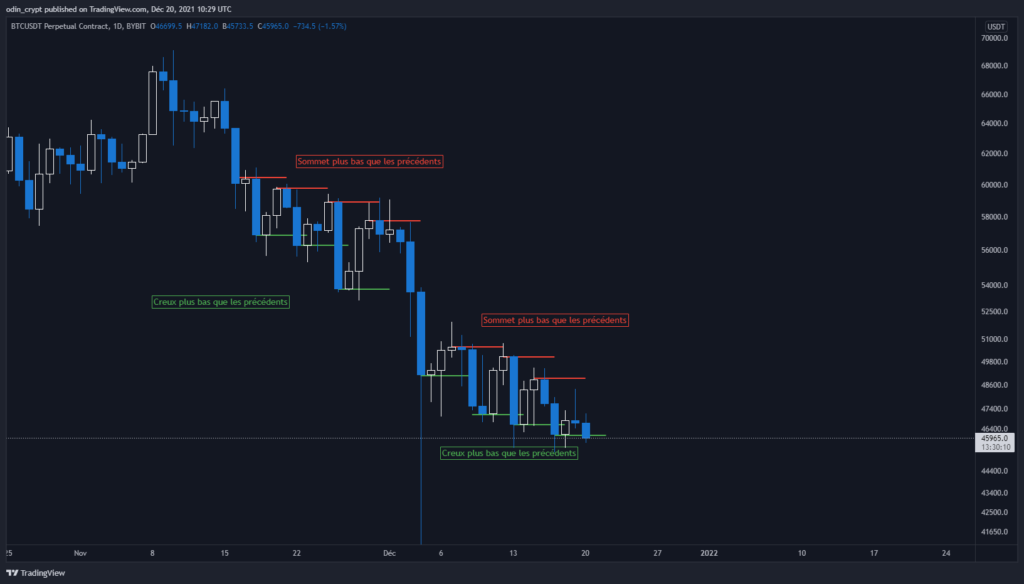 We are not there yet! When zooming in on the 4H view, one can clearly see the formation of a sideways phase (a range), enabling the price to stabilize before its next boom phase. Thereafter, we expect a “manipulation” period, where the price will move to a feint breakout from the bottom, to trick the breakout traders before moving up again.

The Bitcoin (BTC) price has been in a range above its daily support since last week and has not yet managed to take a clear direction. Nevertheless, a big move is expected to take place again in the next few days or even hours.

While the $82,500 mark is apparently holding as a result of the breach of the multi-month daily compression triangle (in yellow), it is important to be careful that the price finally rebounds to the crucial $46,000 support level. In fact, because this level has often served as support and subsequently as resistance, it will once again have to be held in the next few days.

An upward bounce would confirm a full pullback to the top of the pattern, before finally moving back towards the bullish target in the coming weeks. Remember, if the support of $46,000 were to give way, a return of the price to the next support at $41,000 could be expected.

Heading for a triangle breakout in the coming hours?

On the 4-hour chart, we have been seeing a compression of the price on the inside of a continuation triangle for a few days. While in general the breakout is probably from the bottom, it is advisable to wait for the price to break its support or resistance to identify the price target, since the market is more indecisive than ever.

In case of a breakout from above, we should see the price take off in the direction of the triangle breakout target of $53,700. This is the previous support level, which could well become the next resistance level.

Should the price break the triangle line from below, the target would then be at $42,300, just above the next daily support. Either way, the compression in the triangle is nearing its end, so a big push should come in the next few hours.

There has been a recent movement that has shocked many people, particularly those most at risk. Nevertheless, it is not as dramatic as one might think. In fact, we believe that an uptrend is defined by a series of highs and lows that are higher than the previous ones. As it happens, Bitcoin remains in this macro uptrend.

Bitcoin’s price has come in for a big “retest” from its last high, and has managed to close in the $49,000 area. If it succeeds in bouncing back into this area, we may consider the trend to remain intact. The weekly time frame suggests that $43,000 should not be broken on a weekly close. 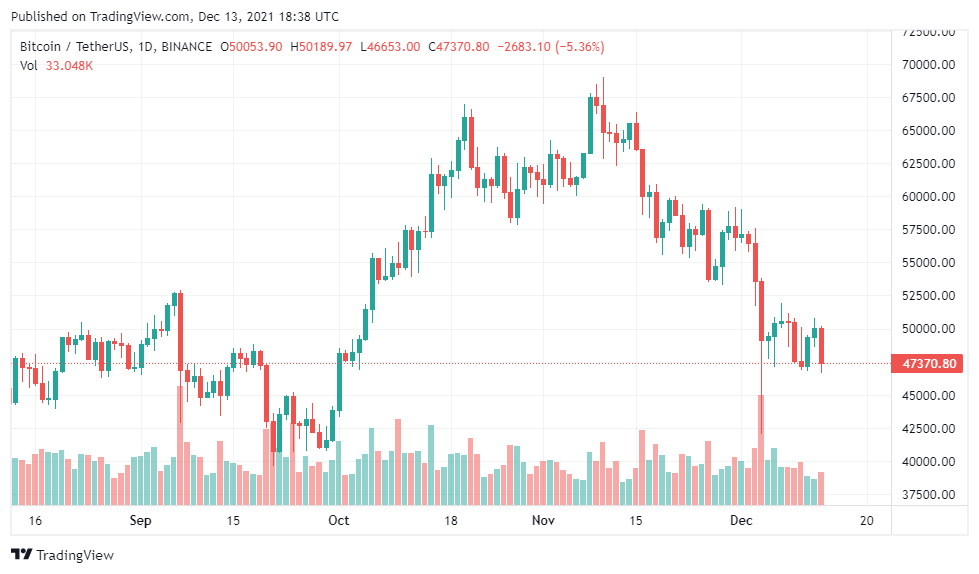 3 other zones are becoming apparent:

So what should we expect now? We believe the price will have to establish a sideways phase between $46,000 and $53,900 before making a decision. At the moment, the most likely scenario is a breakout from the top, although it is important to protect yourself by placing a stop-loss order below $45,500.

One Bitcoin cost around 51,000 dollars according to Coinmarketcap on Tuesday morning. Earlier on Saturday, the price had collapsed by around a fifth to just under $42,000 in less than an hour, but then managed to recover somewhat by Sunday evening. A similar price trend was seen in Ether, the second largest digital currency.

A precise reason for the sudden drop in the bitcoin price was not immediately apparent, according to experts. One pointed to the less liquid markets over the weekend, which can cause greater fluctuations. Should individual investors then dump larger positions, this can strongly depress the price. Moreover, the mood on the financial markets was already tense. Other analysts blamed the high number of so-called futures contracts for the fall in the share price.

The crypto exchange BitMart seems to have fallen victim to a hacker attack. Hackers snatched about $150 million in cryptocurrencies from BitMart wallets, announced Sheldon Xia, CEO of the crypto platform, via Twitter. “We have detected a large-scale security breach involving one of our ETH hot wallets and one of our BSC hot wallets,” Xia tweeted. The blockchain security firm PeckShield Inc. had uncovered the hacking attack.

At the moment, all withdrawals at BitMart have been temporarily suspended, he said. Users of the crypto exchange are asked for patience. Among the affected tokens were meme tokens such as Shiba Inu (SHIB) and the stablecoin USD Coin (USDC), theblockcrypto.com reported, citing PeckShield.

Following the May lows, many cryptocurrencies were back on the upswing, including the oldest of them. Bitcoin briefly bounced back from the Omikron shock, however, then fell by over 20 percent. After recently rising to a new record high of $68,744.03, making it more expensive than ever in its history, Bitcoin continues to be highly volatile, and it fell sharply over the weekend.

For a time on Saturday, bitcoin lost a fifth of its value. Market players attributed this to profit-taking and macroeconomic concerns. Prices of the oldest cryptocurrency fell by up to 22 percent. At the moment, it is trading at 49,413.50 dollars.

Over the past few months, the price quickly dropped depending on the news. As late as July, the price of the oldest and largest cryptocurrency had dropped repeatedly to just under 29,000 dollars in just a few weeks, but then started the countermovement.

For the time being, analysts continue to assume that the Bitcoin price will rise even further over the year. But an investment in Bitcoin is still considered risky among investors. 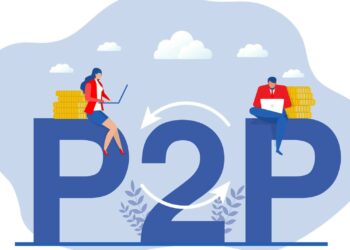 What is Peer-to-Peer Network (P2P)?

Peer-to-Peer refers to a method of connection and communication between devices on a network where terminals with no differences in...

“Solana Saga” Will Be the Smartphone for Crypto Enthusiasts

What Is Hashing, Hash Power, And Hash Function?

8 Important Trends in the 2022 Job Market