What do you do when you want to jump-start a car with a dead battery? In this article, we'll show how jump-starting by jumper cables works.

by Gazettely Editorial
in Cars
Reading Time: 10 mins read
A A
0 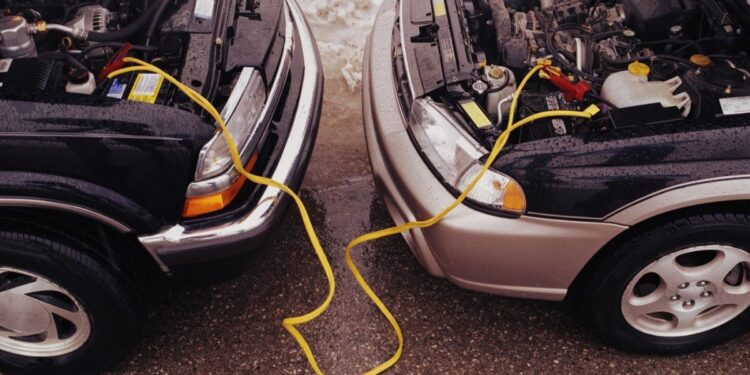 You get into the car and turn the ignition key, but nothing happens. You hear at best a slight clacking somewhere in the bowels of your vehicle, yet the engine refuses to do its usual job. Good news: It is not necessary to call roadside assistance most of the time. The right car accessories and a second car can help you jump start your own vehicle by bypassing the car battery.

So how do you know when you need to jump start?

If your car won’t start, it’s almost always the battery’s fault. The reasons are many. For instance, in the winter, your battery is under a lot of strain from the mix of heating, lighting, and frosty outside temperatures.

And it doesn’t even matter whether the car is parked outside on the street, half-protected in a carport or a garage. A further classic: You were in a hurry in the evening, didn’t hear your car’s warning signal and forgot to switch off the lights. The battery is dad the next morning, and your car won’t start.

You can start by turning off all the power guzzlers (heater, car radio, lights) and then repeat the starting attempt once or twice. Leave yourself a minute between attempts. If all this does not help, you have to bypass the car battery. Perhaps there is a second car in the garage, or you can ask a neighbor for help. When your car refuses service on the road, you’ll have to turn to a stranger.

Follow the instructions carefully when jump starting your car to avoid doing more damage to your battery. 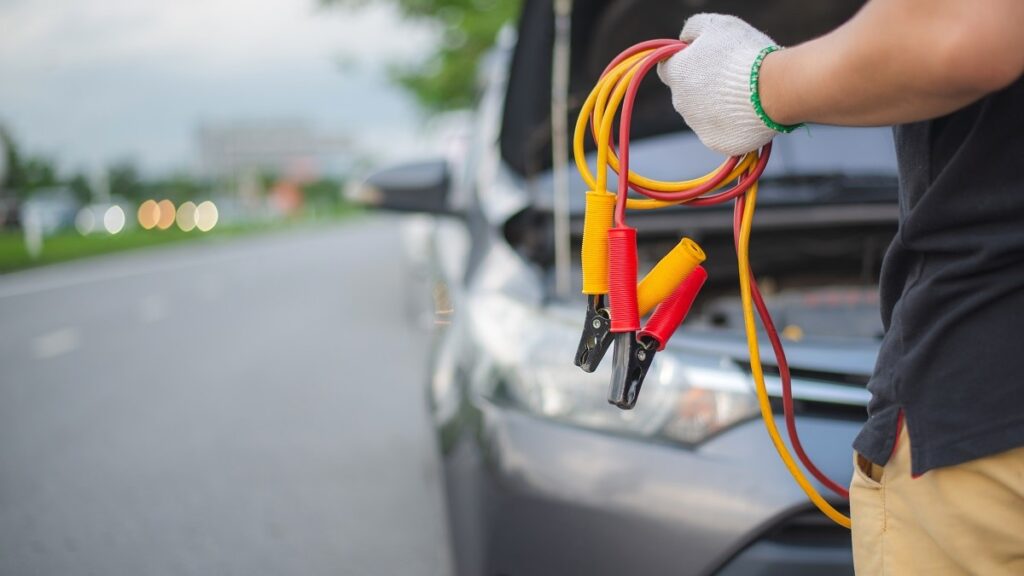 Power donation by jumper cables on the car – what is the procedure?

When the battery is dead, you can jump start your car with help from another vehicle. All you have to do to do this is get power from the donor car. However, this is easier said than done. Many car owners don’t even know how to jump-start a car properly. We show you what to look out for. But before you do, you have to clarify the question that preoccupies many drivers:

What causes automobile batteries to give up their power?

There are several reasons why the battery of a vehicle is empty, and you need jump-starting:

The most frequent cause of a dead battery is cold weather. An engine whose lubricating oil is between 90 and 115 degrees hot will run smoothly like clockwork. At sub-zero temperatures, oil in the engine compartment is as viscous as honey, and gear oil also sticks to the gears like tar. It happens quickly that you need to jump-start your car in such cases. 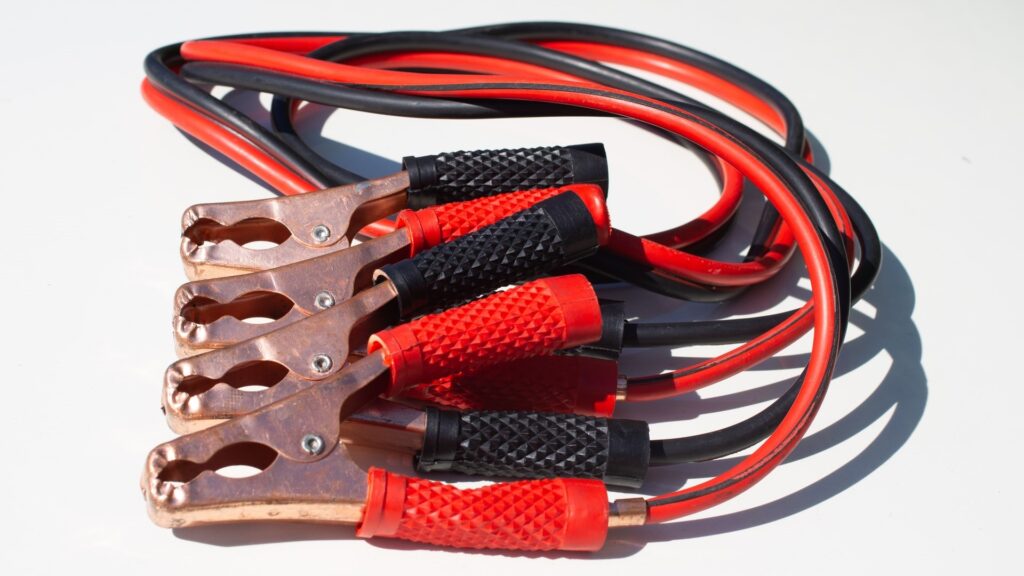 If you want to start the engine, in other words, get it running, you need to rev it more vigorously than usual. And that is exactly why more electricity is consumed. What is largely unknown is that empty and drained car batteries can even freeze. Even at 0 degrees Celsius, the battery can freeze.

Caution: Never charge a frozen or thawed battery; you must replace it. When charging a battery, dangerous oxyhydrogen gas is produced. It may ignite on a cigarette or the spark of a short circuit and lead to an explosion of the battery – sulfuric acid would then be splashed.

Move the vehicle that is to provide power close to the broken-down vehicle so that the distance between the two car batteries is as short as possible. However, the cars must not touch each other (risk of short circuit!). 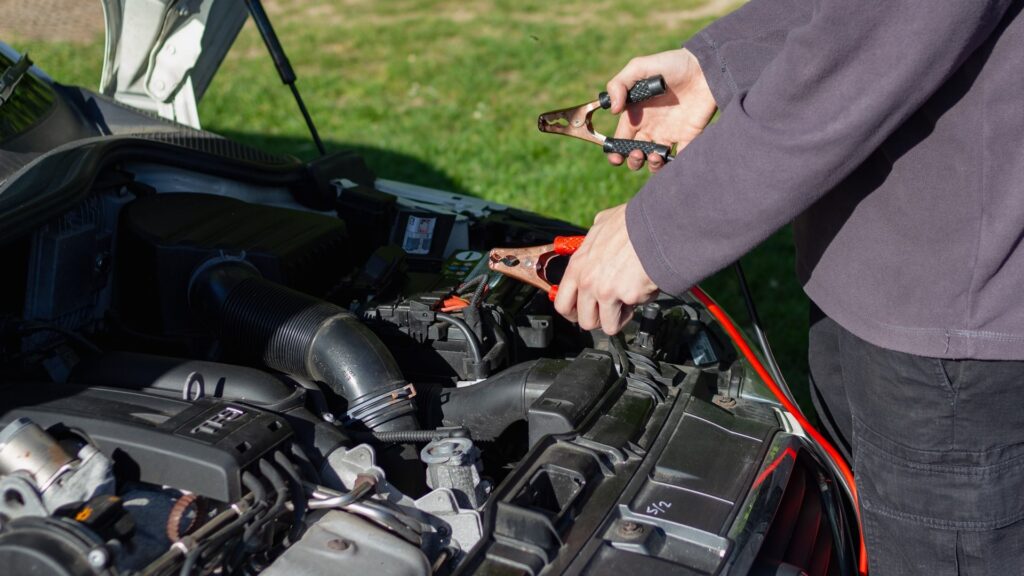 In this section of our article, we will, step by step, tell you how you can properly jump start a car. Stay tuned!

Batteries installed in small cars are less powerful than those in sedans and SUVs. When your Mercedes S-Class has given out, you should – if possible – find a comparable car. When a small Fiat 500 has to be jump-started, it might overtax it, and your car will stay dead. Vice versa, it is no problem if a more powerful car jump-starts the small car.

Step 2: check if the helper car has a battery with the right voltage

Have you found a friendly helper with a suitable car? First, check if the battery has the same voltage as yours. Usually, though, you’re probably in luck because most car batteries have 12-volt voltage. It never hurts to be on the safe side, though.

The car being jump-started should be parked opposite (nose to nose) or beside (side to side) of your defective car, ensuring that the jump-start cables are long enough for the distance to be bridged. Most importantly, make sure the bodies of the two cars are not touching. Incidentally, on rare occasions, the battery is not located in the engine block but in the trunk. 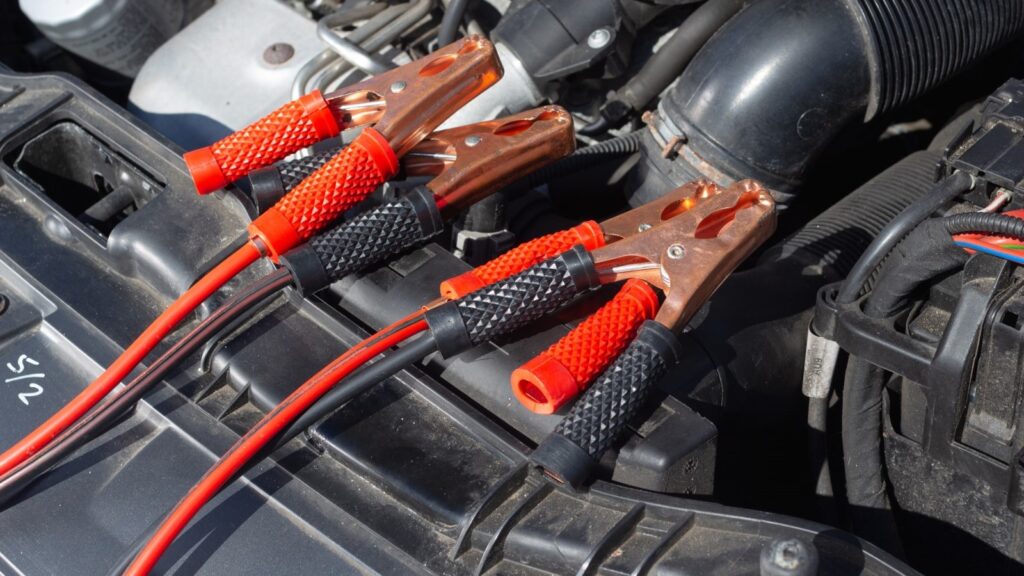 Step 4: Turn off the engine of the helper vehicle

Suppose the helper vehicle has been moved into the correct position the first time, the helper switches off the engine. Now you have to connect the cable correctly.

Step 6: Start the engine of the helper vehicle

It goes without saying. The helper sits down in his car and starts the engine. The ideal is that now current should be transferred via the contacts into your battery. 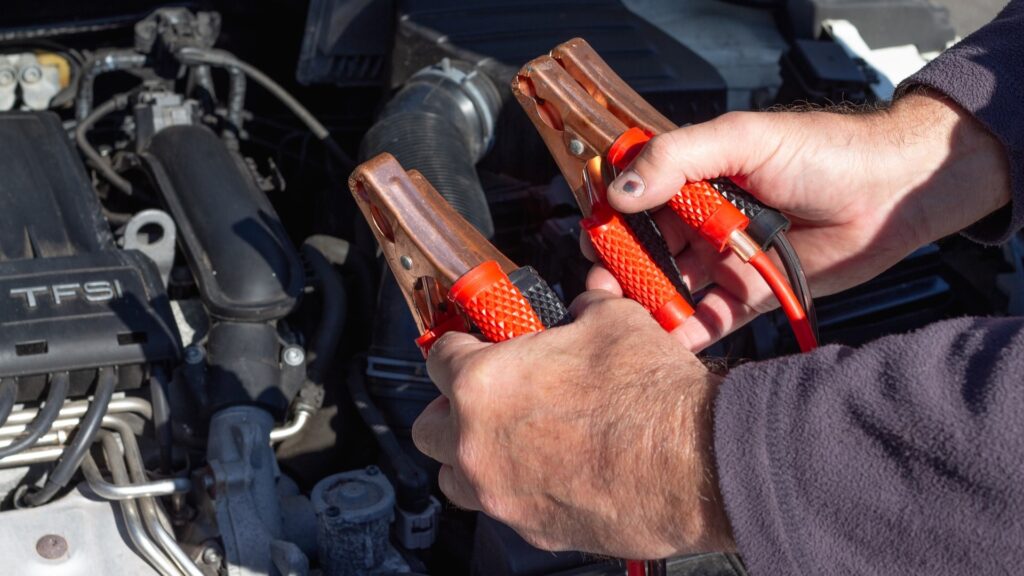 Step 7: Starting the engine of your vehicle

Now it is your turn: Send a shock prayer to St. Christopher, the patron saint of drivers if you like and activate the starter. In an ideal case, the car will now give a sign of life and start.

To prevent voltage peaks, switch on a power guzzler in your car, such as the heater or the fan.

Run the engine and get out to remove the clamps. Attention: First, remove the black clamps, then remove the red ones. Pack the jumper cable away, say thank you to your helper, and then drive off.

Step 10: Driving the car for about an hour

Were you going to drive to the workplace ten minutes away or to the supermarket? Sorry, that’s not enough. For your car battery to recharge sufficiently, you must drive for at least one hour. The better choice is long distances without stops, for example, on the highway or country roads with few traffic lights. Stopping and going in city traffic only puts additional strain on your battery. 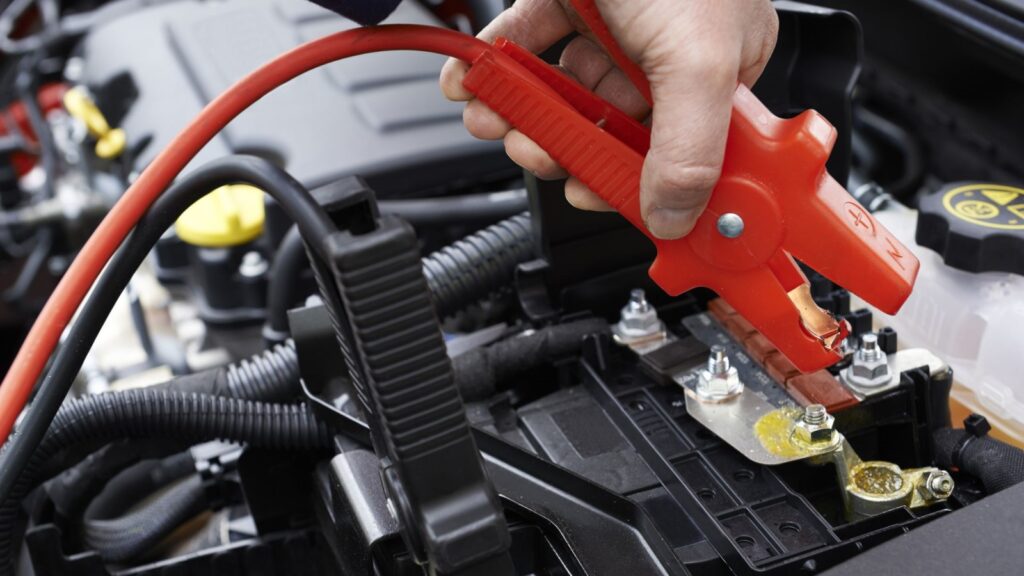 Are jump starts bad for the car?

Normally, when jump-starting is done correctly, damage does not occur. Some mistakes should be avoided, though, because you could well damage both cars’ batteries and onboard electronics. You should pay attention to the following: 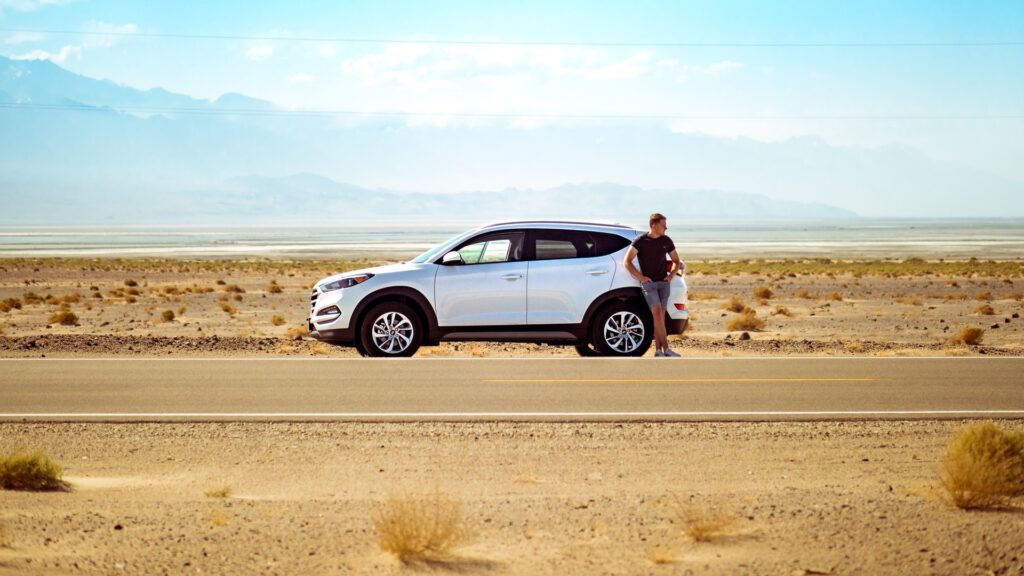 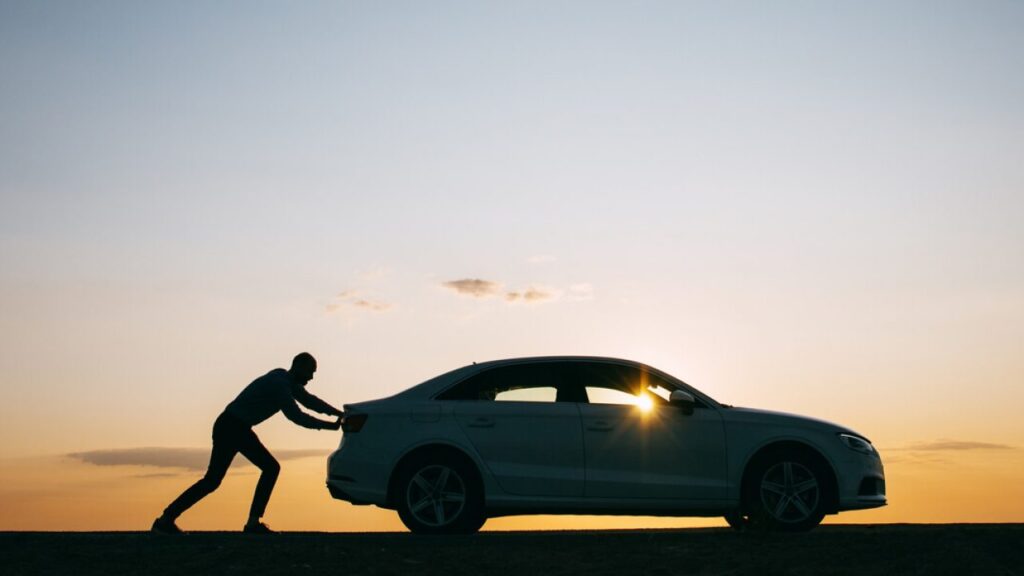 Can I push start the car as well?

An alternative to jump starting is to push start the car. This only works with manual vehicles, though. You should not try this with automatic vehicles!

To start the car, just put it in second gear, press the clutch down, and turn on the ignition. It’s best to find someone to push your car or let it roll down a slope. Once the car starts to roll, let the clutch come up and press the gas pedal. The motor should now start, and you can drive normally. For a while, don’t try to stop and don’t stall the car. 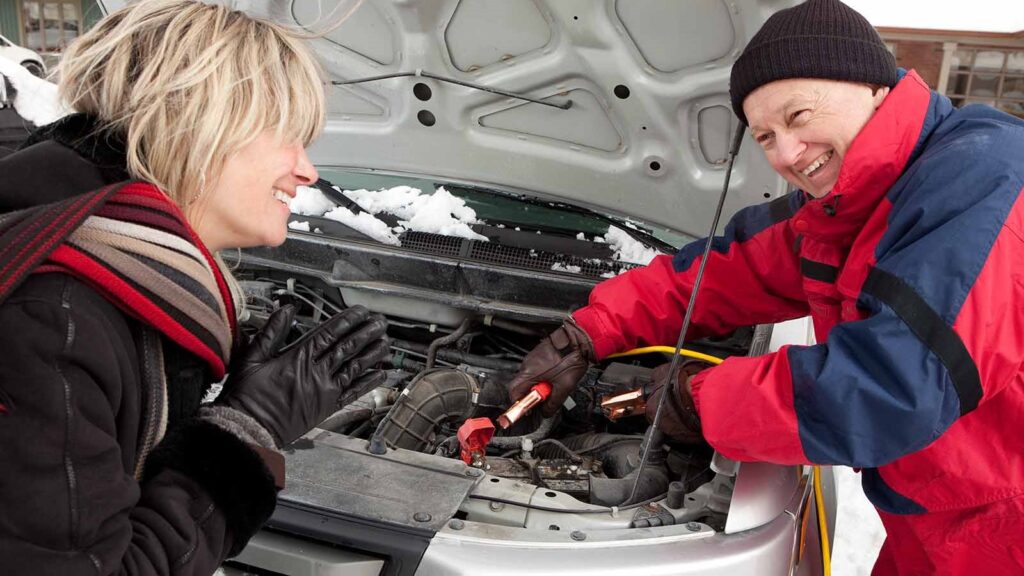 If the car stalls after a short distance, then what should I do?

When your car stalls after driving a short distance, you might need to jump-start again. It could be that the two batteries weren’t connected long enough to transfer enough current.

Leave the batteries connected a little longer this time. After that, you should drive around for at least 20 minutes to allow the engine to recharge the battery. Attempt to drive on country roads or highways where you don’t have to stop. This will best charge the battery. If you can’t get that far at all and break down again after a short time, it might be time for a new battery.

In that case, take your car to a repair shop that can tell you exactly where the problem is. When they tell you that the battery needs to be changed, then you may still choose to do it yourself. At the very least, now you know where the problem lies.

The correct jumper cable is important

Suppose it does not work with the jumpering. In that case, it can also be due to the equipment, because besides the correct procedure, appropriate cables for jump-starting are also important. Too small a cable cross-section can put a spanner in the works.

To play it safe, the cross-section should have a diameter of at least 16 mm². In cars with a larger engine capacity (over 2.5 liters), it should even be 25 mm². A weak charging cable can also be a reason why the jumpering does not work. Therefore, jump leads that comply with DIN standard 72.553 or ISO standard 6722 are recommended.

Since jump-starting equipment is usually used in winter, the ADAC also advises paying attention to the cable’s flexibility as the material hardens in cold temperatures. To prevent injuries, the pole clamps should be made entirely of plastic; only the tips of the clamps may be made of metal. 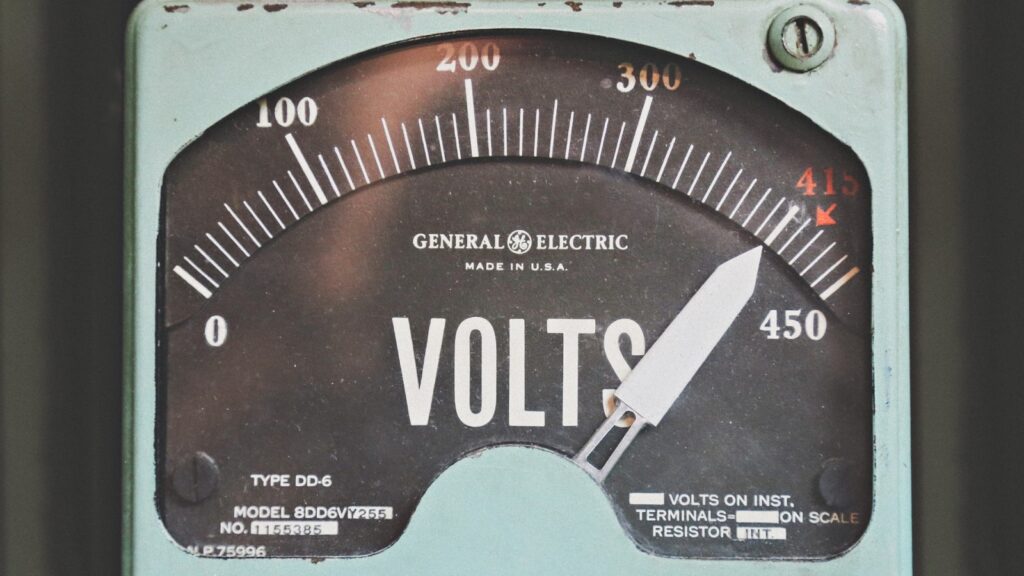 The e-car must be disconnected from the power supply! However, it would help if you were sure to check what the operating instructions for your electric car say in this regard to avoid damage. Using the electric car as a donor – that is, giving another vehicle a jump start. The electric car’s battery may not be appropriately designed to supply a sufficient amount of power to a combustion engine.

If an electric car’s drive battery is empty, it is not possible to jump-start it anyway. The broken-down electric car must then be towed and transported to the nearest charging station.

Lead Generation 101: All You Must Know About Leads 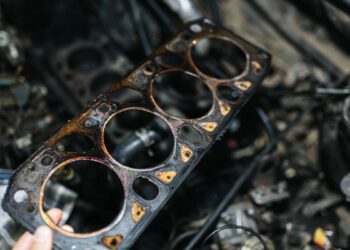 Dry Elbows: Causes and Remedies to Treat Them

Top 10 Fascinating Fountains of the World