Jin Sakai's adventures continue in our review of Ghost of Tsushima: Director's Cut, the revised, corrected, and DLC-complete version of the game developed by Sucker Punch.

by Gazettely Editorial
in Games, Reviews
Reading Time: 6 mins read
A A
0
Share on FacebookShare on TwitterShare on PinterestShare on WhatsAppShare on Telegram

Ghost of Tsushima: Director’s Cut made its debut in its most complete form on PS5 almost a year ago. The game starring fallen samurai Jin Sakai is back in a revised and corrected version, complete, with the DLC dedicated to Iki Island. The original Ghost of Tsushima was a great game. We were especially impressed by the art direction that enhances an interesting and versatile combat system.

This re-edition leaves the experience and the story untouched, working, of course, on the frame rate and resolution but also going to tweak some small aspects here and there: starting from a cleaner game menu (which may not interest you, but you notice it at a glance) to the lock on of the camera, not to mention a greater intensity of the colors, the game shows to be the definitive edition of an adventure maybe not particularly innovative but delightful to play. 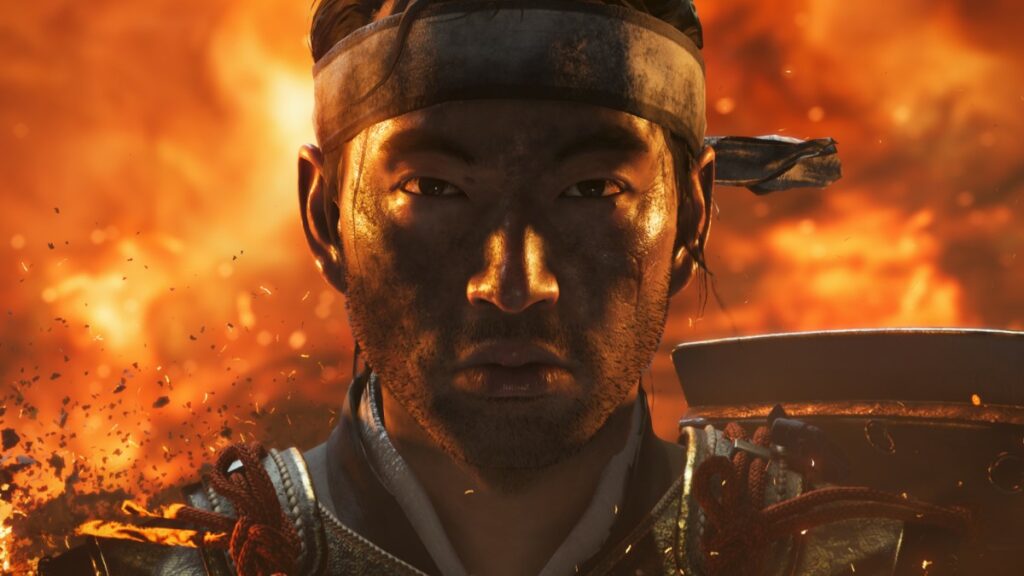 Just as mentioned, the thing that jumps out most upon starting the game, after the nonexistent loading, is the eye-popping glimpse given by the combination of resolution plus frame rate. The Ghost of Tsushima was already beautiful to look at in the PS4 version, strong in the aforementioned artistic compartment; the same is even more enhanced here, though the differences are not so sharp precisely because the base from which to start was already excellent.

By eye, one can perceive a greater intensity of tones, whereas, in the original, they gave the feeling of being more washed out. There is no real graphical difference between the two versions. Still, resolution obviously makes it look sharper and cleaner. At the same time, the framerate jump (already appreciable with the original played on the PlayStation 5) is noticeable. It makes our journey to defend Tsushima smoother and more intense, especially in combat. 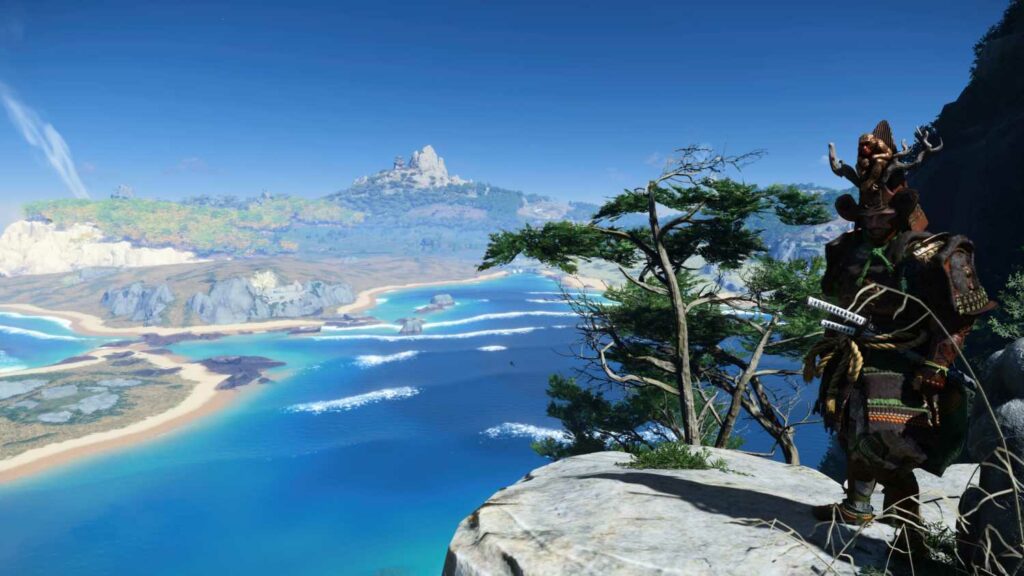 However, even at the normal difficulty level, we had to spend time getting used to the flow of battles, particularly against some specific enemies. From the technical point of view, Ghost of Tsushima: Director’s Cut brings the experience a couple of steps up from the original.

Still staying in the technological sphere, we were struck by the care put into the haptic feedback of the DualSense: especially when in the footage the characters use the katana, taking it out of its sheath or putting it in place, the highly subtle vibration of the metal that we feel in the headset is also accompanied by one to the touch.

It is hard to find the words to describe it, and it would be easier to tell you to try it yourself, but the feeling is that of feeling that same metal under our hands. It’s totally different feedback from the classic vibration due to any weapon, mainly a melee one. Above all, it’s inserted perfectly. 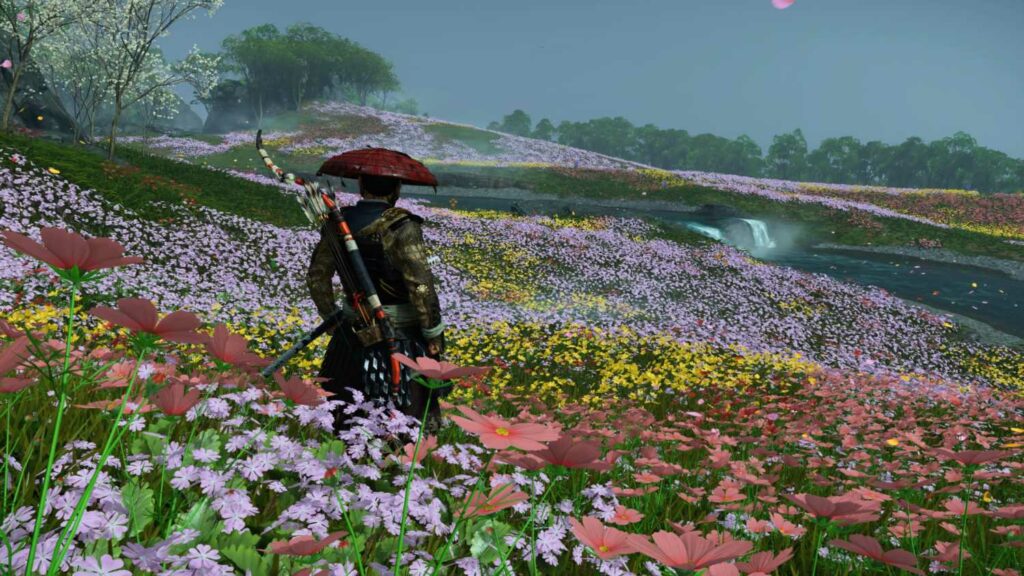 Additionally, we have trigger resistance when using the grappling hook, pebble feedback when riding along rough terrain, and more general reactions to which we have already been accustomed. The most felt implementation is the one devoted to the blade.

Instead, regarding accessibility, however, Sucker Punch has gone and introduced that much-needed lock-on. While understanding the reason for including it, one finds it out of tune.

Ghost of Tsushima is a game designed with a certain approach to combat and enemy targeting. As much as it may come in handy to have an opponent under control at all times, throughout those few minutes when we used it, we had the feeling of finding ourselves using something posthumous.

It is not useless nor indispensable, although depending mainly on the style of play, it could make some confrontations easier for you, placing a patch on a camera that remains not without flaws.

For the rest, let’s find among the new options the possibility of not showing the bow and quiver on Jin’s back but, most importantly, a reversed command scheme to make it easier for left-handed people: all the actions are mirrored, in the control map, therefore if a right-handed person will perform each action (calling the horse, asking for a duel, etc. etc.) with buttons, a left-handed person can do it with the directional cross – and so on for the other commands, the movement included that is set on the right analog stick.

It is not a lot talking about novelties, but let us reward the commitment of the developers and their consideration of the public and its advice: witness the lock-on, which, though not considered necessary, in any case, testifies to the community’s listening. 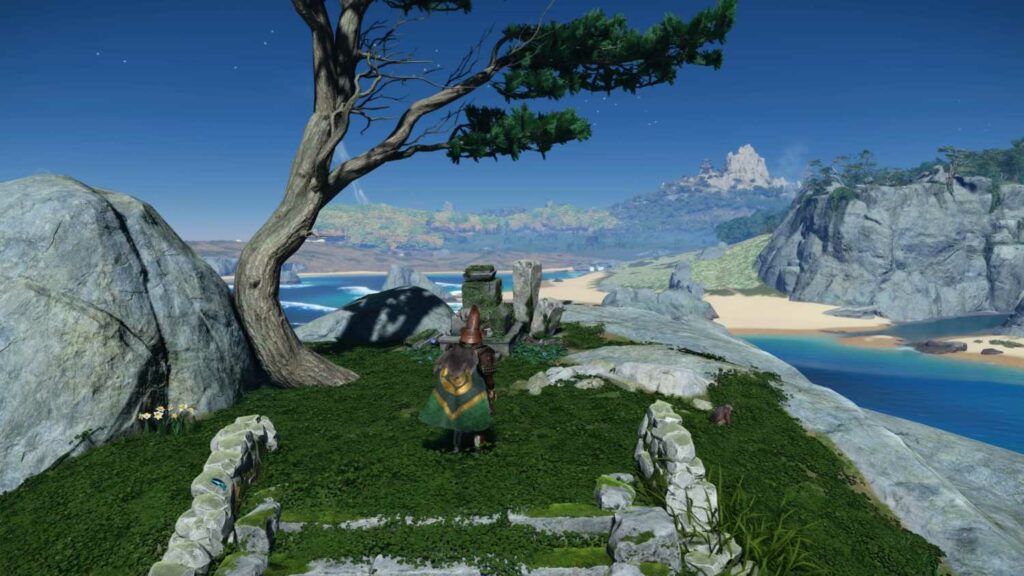 A few lines we also devote to this option: this is certainly not the first game that allows importing the saves of the old version easily but, given other, more farcical cases, it’s worth pointing out that Ghost of Tsushima Director’s Cut allows transferring saves from the start menu as long as you have them in the Cloud and from there have put them on the console. We refer to the dedicated news item for more details on saves and Trophies.

The Island of Iki and Jin’s past

Let us examine the most exciting content in Ghost of Tsushima: Director’s Cut, The Island of Iki. Just as soon as we reach Act II of the main story, by going to the pause menu, we will see a new journal entry through which to follow mission directives to get to the island.

And what awaits Jin once he lands there is a constant and brutal confrontation with his past: in fact, Iki Island is the place where he lost his father, the event that has haunted him ever since and that will be the basis for the torture inflicted by the Eagle – a mysterious character from the Mongol faction, a skillful potion maker who will keep Jin in check throughout the entire DLC. 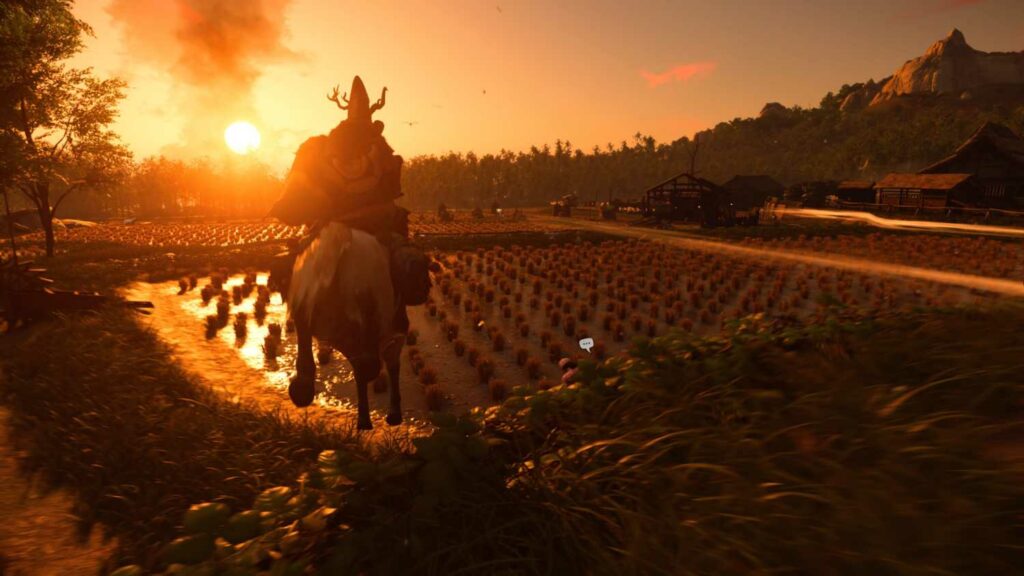 Narratively speaking, we are satisfied with the choice to reconnect this content to the main plot, or better said, an essential part of Jin. On the whole, the writing is good: the first half is the best one, and in the second half, we find things to be a bit too accelerated but still manage to keep a sense despite the smears.

From a gameplay point of view, DLC adds just enough: besides the island to visit (which takes about ten hours and even a bit more), there are two new exploration elements, archery challenges and animal sanctuaries. The first speaks for itself; the second embodies Jin’s moments of reflection, during which he tames wild animals with the sound of his flute in a short minigame.

There is also no shortage of areas to rid of the Mongols’ presence to increase our fame on the island, lore to follow to find better equipment (one, in particular, we really enjoyed because of the setting), and generally small challenges here and there that will enrich our stay on the island without making it feel excessive.

Making up and down the Isle si Iki, be it for plot reasons or to explore following the question marks on the map or any side quests, never weighs accomplice, once again, to the artistic direction for which Ghost of Tsushima has already shined in its time.

There is also a small update on the enemy side: shamans, the real thorn in the side in this adventure, are being introduced. We are talking about opponents that chant a song and influence their allies, making them more resistant and, more importantly, quite a lot stronger. 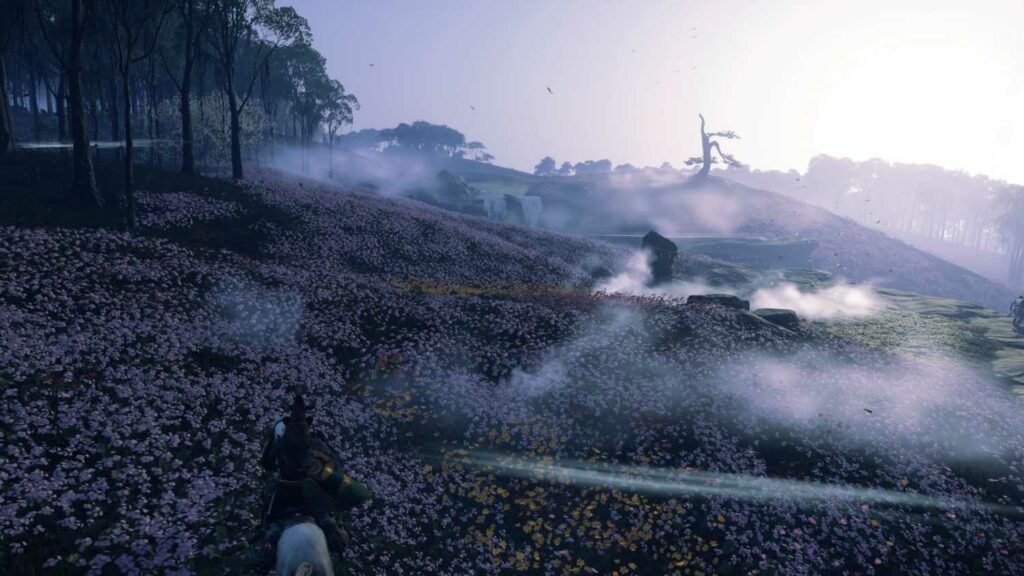 They probably are not history for players who have completed the game and upgraded Jin to the maximum. We had very average character, particularly in terms of armor and weapons. When the Mongols went into this sort of berserk, it only took one blow (perhaps given by the brutes or lancers) to take them out.

Considering that the shamans tend to keep their distance but, when reached, are nonetheless not helpless and indeed prove capable of skillful handling of a spear, they will really be the main annoyance of our outing to Iki Island. Let us specify that we cannot leave until a particular time; therefore, when you start it, be sure you want to do so.

Overall, Iki’s Island is a worthwhile DLC. Above all, from a narrative point of view, it rests on a solid foundation, puts in good characters, and binds itself double-handedly with the main plot while not expiring into a trite excuse to add extra content. Ghosts of the past are torture for Jin, and it is time to come to terms with them.

Between 10 and 15 hours of gameplay, new foes, exploratory techniques, mythical stories, and gear (one in particular very worthwhile), Iki Island is worth a return to Ghost of Tsushima. 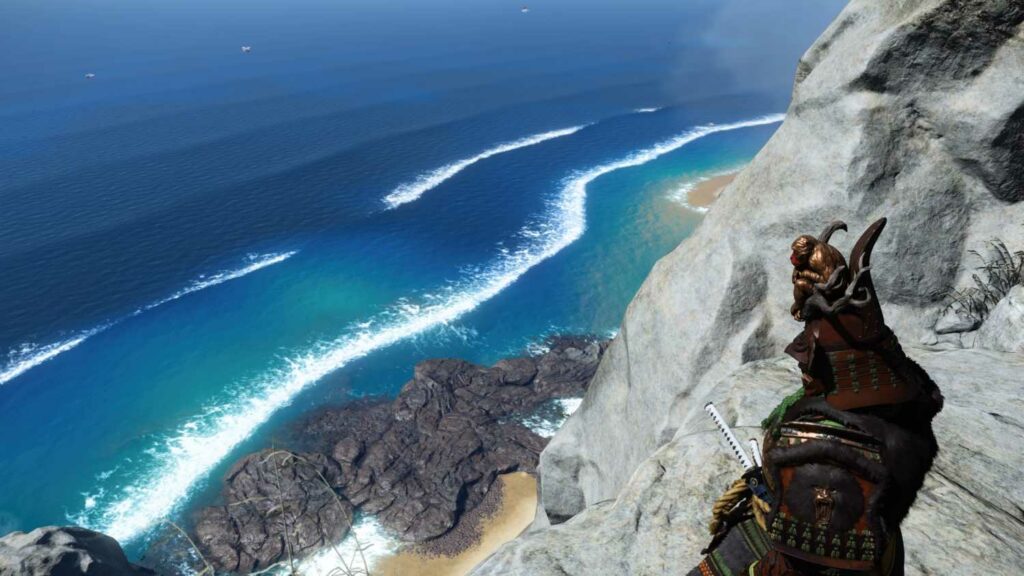 Ghost of Tsushima: Director's Cut is the definitive edition of a game that is definitely worth trying if you have not already done so. Sucker Punch did a great job with the original. It goes to refine it here, especially about implementing haptic feedback. If graphically there is not too much of a difference with the PS4 version (while remaining perceptible), it is the resolution/fps combination that makes it shine. Added to this is Iki's Island, a good DLC that wraps up the loose ends of Jin's past, providing some background on his father and the relationship between them and proving very enjoyable though rushed on the ending. The secondary stories that enrich the adventure, a few additional techniques, the challenges, and all other small gameplay elements give the DLC its due without stretching the broth in a forced way. Ghost of Tsushima: Director's Cut is, without a doubt, the best version of the game so far.