These cases guide air from the bottom to the top

With its A-series, In Win would like to build compact and minimalistic cases. The A3 and A5 realize the intention for the Micro-ATX and E-ATX formats. Because tight space and a high number of fans are becoming less acceptable, in these two models air is routed from the bottom to the top, just like in many In Win cases.

However, In Win has not launched simply larger versions of the already available A1 mini-ITX tower. Both A3 and A5 must do without the bottom light and the power supply unit with specially adapted cable lengths for the case, and they are clearly more conservatively designed in this respect.

In Win instead calls the tool-free disassembly of the outer casing and the vertical cooling design outstanding features.

Since the plain front can be closed due to the cooling concept, there is space for the power supply behind it, which exhausts air upwards from the interior. There is a maximum of 200 millimeters of space available,

However, if the power supply is longer than 170 millimeters, then the graphics card may only be 280 millimeters long to avoid collisions. There are 162 millimeters in height available for CPU coolers, allowing the installation of almost all available specimens.

In Win distributes the hard disks in the chassis. A mounting spot for 2.5/3.5″ HDDs is located behind the front on the bottom, another bracket behind the mainboard tray. The A3 can also store another 2.5″ HDD there, the A5 has two 2.5″ HDDs because of the higher height.

At the moment, the cases have not yet made it to retail, but can be purchased in the In-Win online store. There, the A3 costs 115 euro, while the A5 is priced at 127.50 euro.

A review by KitGuru rates this as too high for “inconspicuous cooling performance”, but the chassis, according to the conclusion, is worth it especially when the looks are pleasing.

In Win A3 & A5 Technical Specs 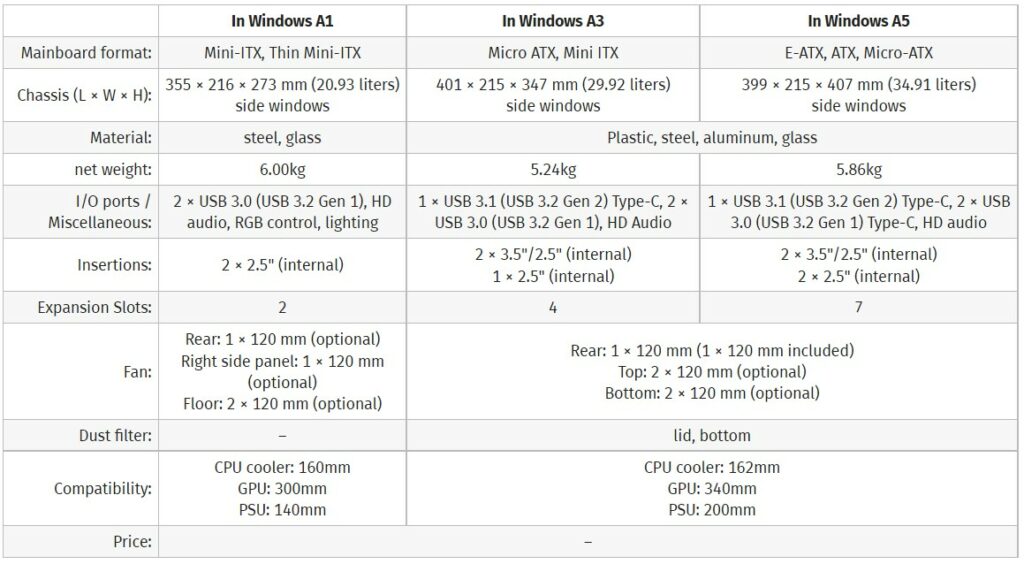