Players Decrypted the Languages in Stray

Once again, fans impress with ingenuity and commitment.

The Stray still hides a lot of puzzles. Among them is the meaning of the mysterious inscriptions one can encounter in the game world. Users on Reddit set themselves the task of cracking the ciphers created by the developers.

At least three different alphabets exist in the world of Stray, as it turns out, and one of them – used, among other things, in the chapter titles – that was fully figured out.

That consists of 27 characters that correspond to the 26 letters of the Latin alphabet, with the letter P coming in two variants. Swapping the symbols for letters produces inscriptions that make sense in English.

A lot of the deciphered inscriptions are neon signs, labels or advertisements, which when translated look quite… ordinary. We can see, for example, the inscription “PIZZA” under the logo of a pizzeria, “TASTE EATING” on the signboard of a bar, or a newspaper entitled “DROIDS NEWS.”

However, sometimes there are more puzzling inscriptions like the title of a book which reads “ANCE OVES” or “BOSH OKOP”, which likely means “BOOKSHOP”, i.e. a bookstore, though the letters are switched places in a rather illogical way. 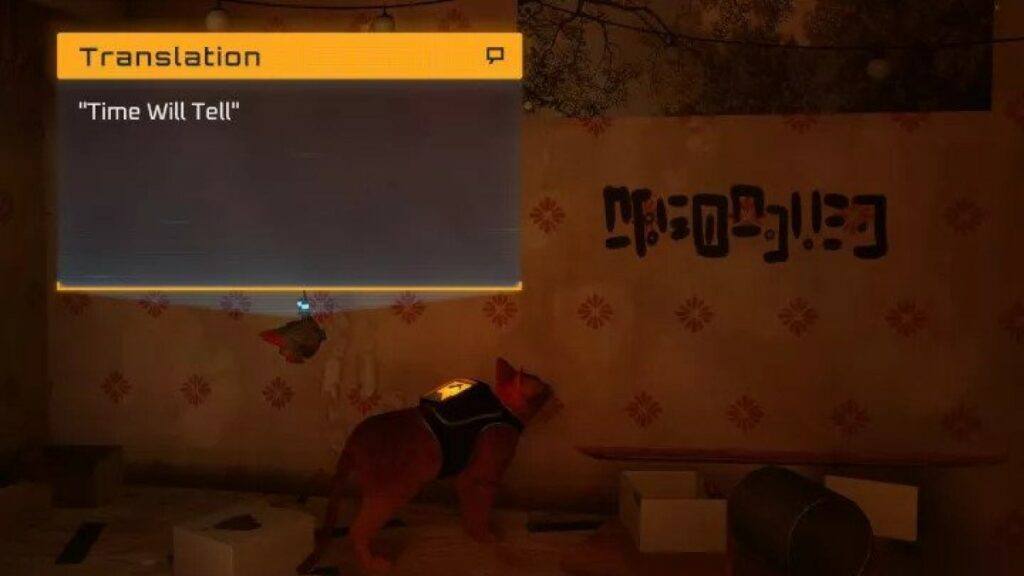 The other encryption is a bit more difficult – in its case only the letters A, C, E, F, L, M, O and W were decoded. The other 14 symbols remain a mystery. There are numerous indications that a language other than English was used here.

In fact, some commentators are suggesting that it’s a completely made-up language or just ordinary random letters without much meaning. Sometimes there are also subtitles that visually resemble existing words, for example, something that looks like “ACER” on a poster advertising RAM.

In the handwritten notes scrolling here and there, another cipher can be spotted, but for now the least is known about it.

That said, the players are slowly moving forward and more and more people are trying to help them. A thread dedicated to decoding ciphers in Stray can be found on Reddit.