Google's Doodle games are more than just a short time killer. We have gathered the best and most popular titles.

by Gazettely Editorial
in Games
Reading Time: 8 mins read
A A
0
Share on FacebookShare on TwitterShare on PinterestShare on WhatsAppShare on Telegram

Anyone who uses Google has inevitably stumbled across a Google Doodle at some point. The US company celebrates certain occasions, such as birthdays of famous personalities, holidays or other major events, through creatively adapted versions of its logo. While they were simple drawings, in the beginning, the doodles have become much more sophisticated in recent years. Thanks to the Doodle Archive, which includes more than 2000 Google Doodles, these games can still be accessed at any time. Gazettely has compiled the most popular Google Doodle games for you, so stay tuned!

In addition to animated doodles, there have recently been numerous mini-games, which were likely played in secret in many offices and schools. Of all the doodles, many are interactive and often based on respect for any sport, music and person or others. Doodles allow users to play these short interactive games on both their phone and computer. 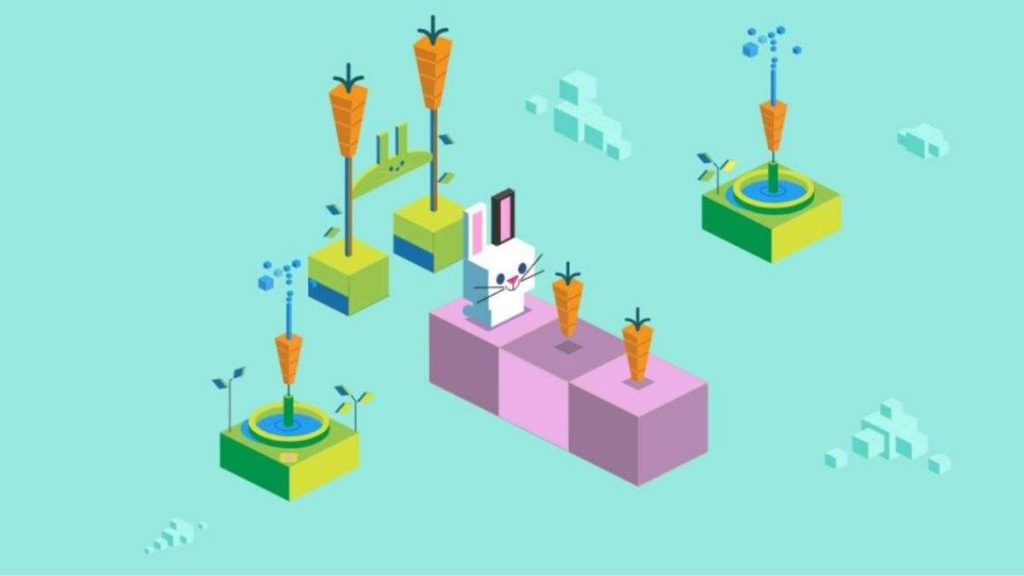 Coding for Carrots was first introduced as part of the two-week Google Doodle game, a retreat at Doodle 2017 as Google was celebrating the first programming language for kids, and it was its 50th birthday. This game enables your children to lead the rabbit to the islands with a very simple instruction set. Place blocks for the rabbit to collect carrots, and the game is WYSIWYG based. Repeat this at each step until the end of the included video game on your phone, desktop and laptop. You can play Coding for Carrots here. 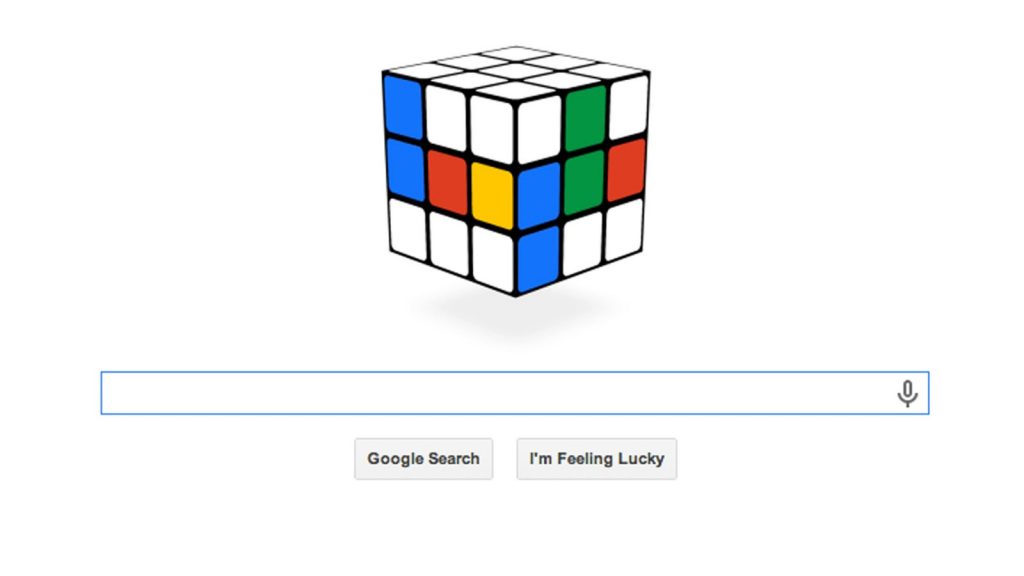 Some people would be happy if they could solve it once in their life, others manage it in a few seconds – the Rubik’s Cube fascinates many people. So it’s all the less surprising that Google honored the “Rubik’s Cube,” with an interactive Doodle game in 2014. If you want to play this Google Doodle game, you can click here. 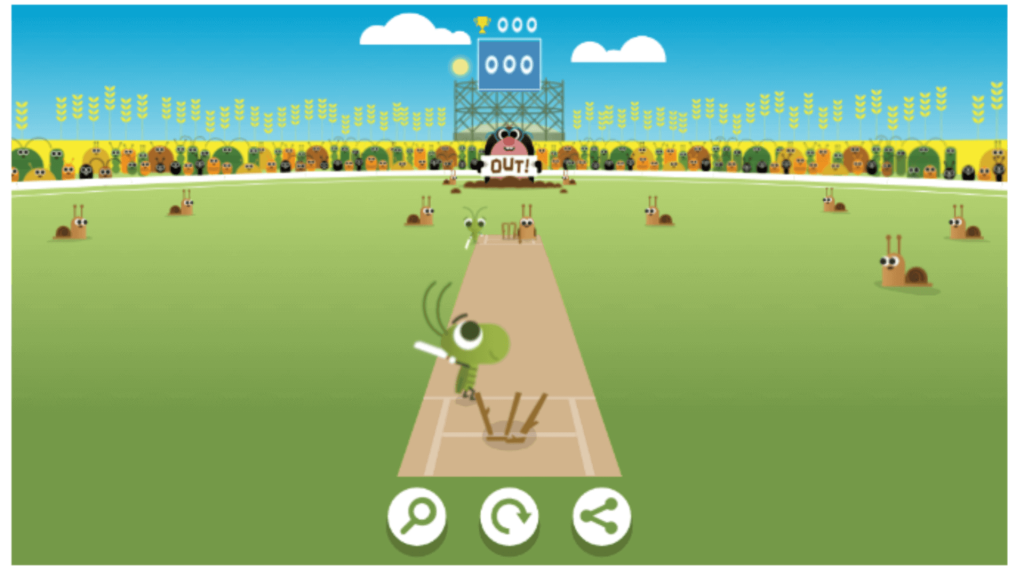 Just because cricket is a fun sport, it doesn’t mean it’s best played without breaking a sweat. Here’s Cricket, the interactive Google Doodle which celebrated the ICC Championships Trophy 2017. It enables you to play cricket like a racket since you need to score the highest level of the game before you get clean. Hit the key to click the bat and attempt to score four sizes and shapes to keep on top of the game. It’s a fun game that all fans of cricket or even non-cricket will love, so please try it right away. This has been one of the most popular Google Doodles games on Google despite the fact that it is not available in the United States. 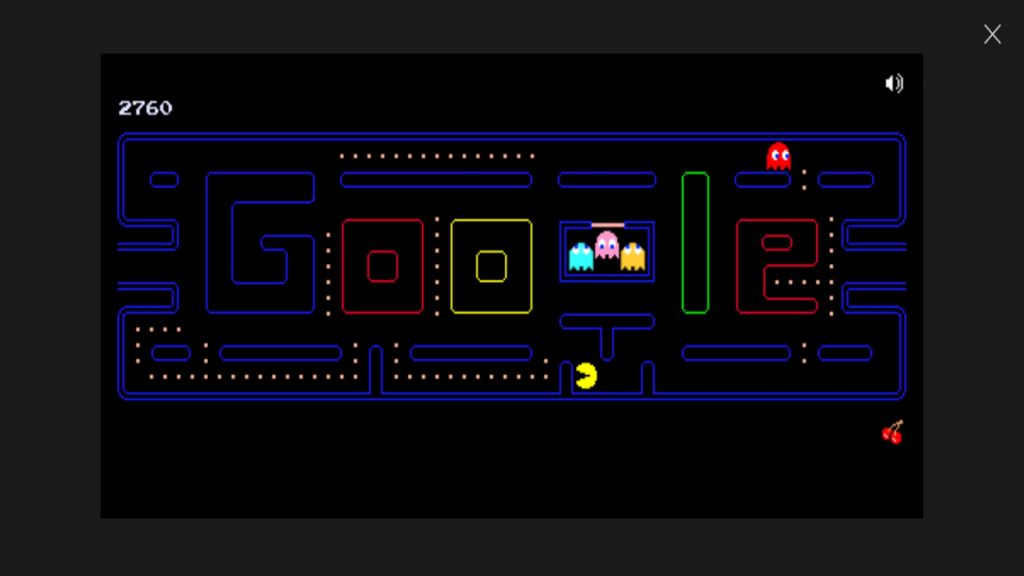 Even though he was not much more than a three-quarter circle that could move in four directions, he became the first superstar of the video game industry: Pac-Man. The Namco creation celebrated its 30th birthday in 2010, which Google immediately honored with an interactive doodle. It turned out that 30 years later, the simple game principle is still addictive, especially when you cross a Google logo as a playing field.

Among the new Google Doodles that have popped up is Fischinger, a music creation game that lets you make music using four different instruments. Fischinger Doodles celebrates the 117th birthday of Oscar Fishinger music. Just choose the instrument, place some notes at random and the game will play music. You can fine-tune it a bit by altering the tools and some of the other settings in which you can spend hours tweaking it. The pictures are awesome and relaxing, making sure you won’t get tired of it. Make music easily and use it as a background point wherever you want. 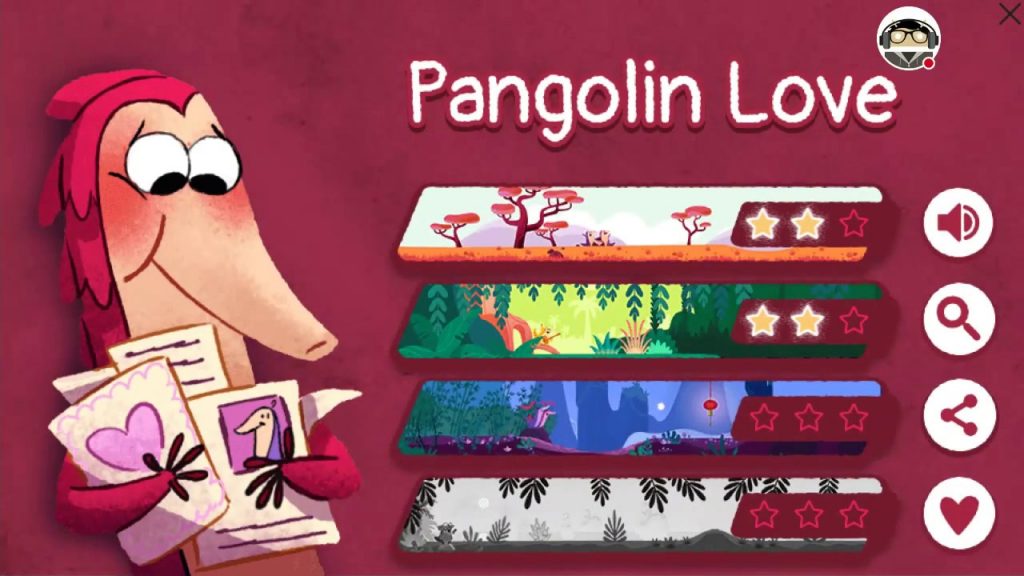 Well, speaking of legends: In celebration of Valentine’s Day 2017, Google released a Doodle game that is very reminiscent of Sega’s Sonic. Instead of a blue hedgehog, however, you roll through the African steppe with a pink pangolin. The cute and entertaining game was designed to draw attention to the endangered species and explicitly highlighted WWF initiatives to protect them from poachers. To play this Google Doodle game you can click here. 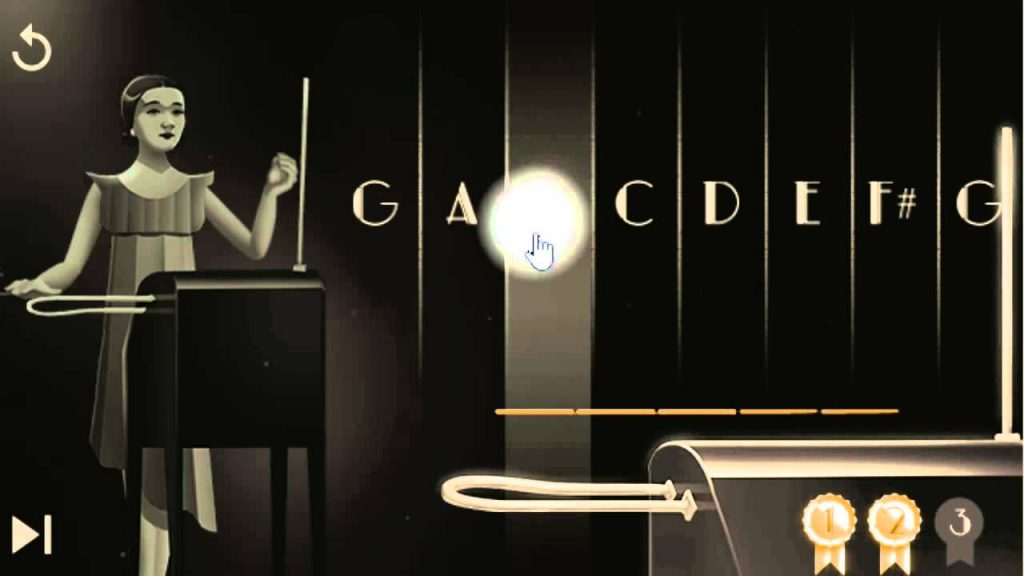 Indulge in something that was the forerunner of today’s electronic music, Theremin. Perked by a violin miracle, Google honored Clara Rockwell by designing the Rockmore doodle that allows you to play Thermen for a change. Get started with some tutorials that tell you how to play Thermen and prepare to make your own music with Thermen as your main tool. Use the mouse or touch controls to hit notes and tweak settings to get great music on the go. Definitely will take some time, however, once you get feedback, you’ll love it. 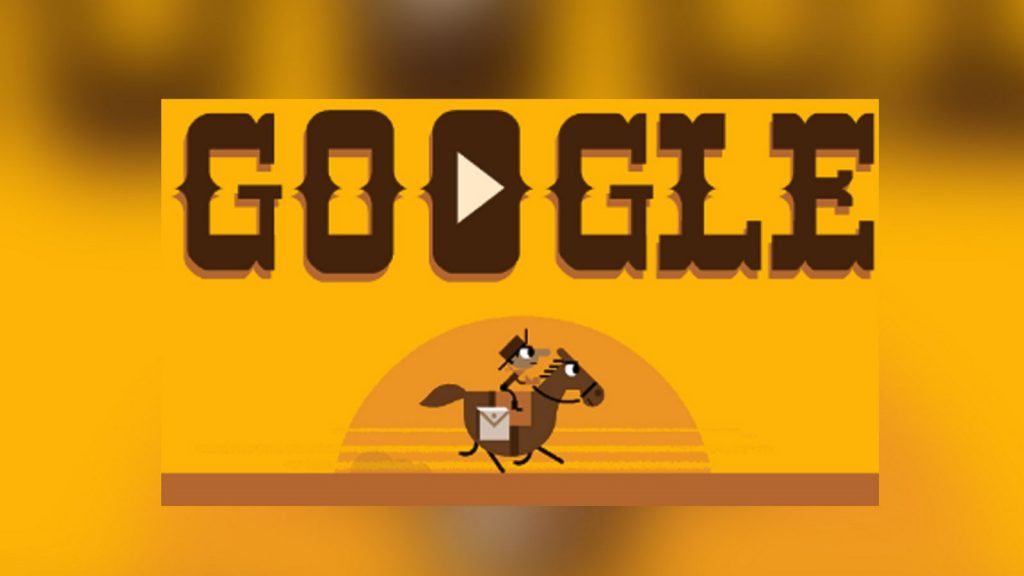 Whoever wanted to have a letter quickly shipped through the Wild West in the 19th century commissioned the Pony Express. While the service became a financial disaster and was only operational for just under 18 months, it achieved worldwide fame through the biography of Buffalo Bill as well as numerous westerns and TV series and is still a household name to many people today. In 2015, Google celebrated the 155th anniversary of the Ponies Express with a simple yet challenging mini-game. 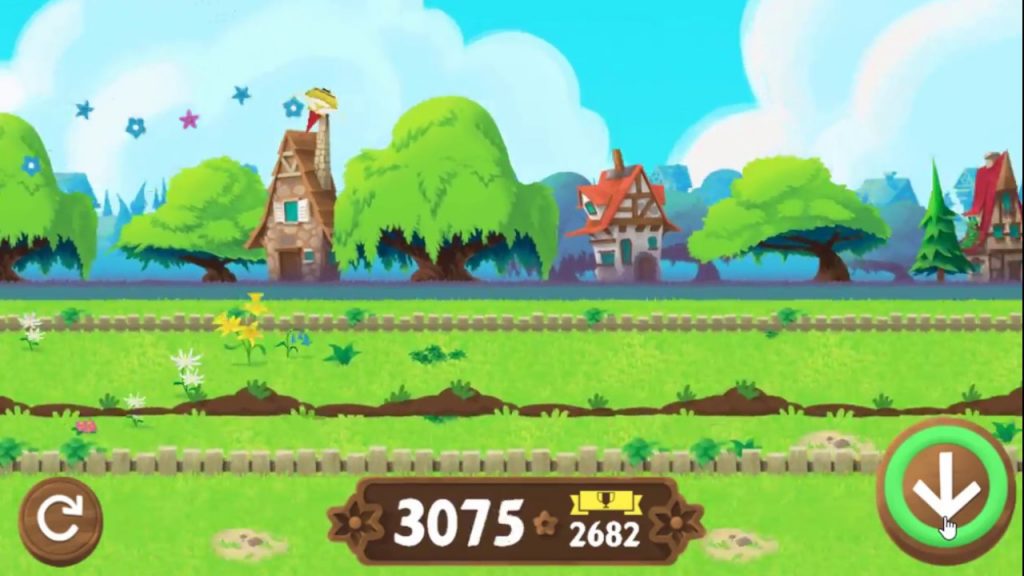 Get away from the normal doodle scene with Garden Gnomes, which is an exciting game that has you throwing gnomes to stick trees in wide areas. You are tasked with raising the gnome on the seat as high as possible. The gnome will bounce off tree stumps, mushrooms and clouds or you may use the boost button while completely charged to bounce and hit further than when you last threw it. Let go of the catapult very fast and you get a negative score or wait a long time and the projectile won’t be thrown, therefore timing is everything. Also, the game has an attractive background score that you will really enjoy. 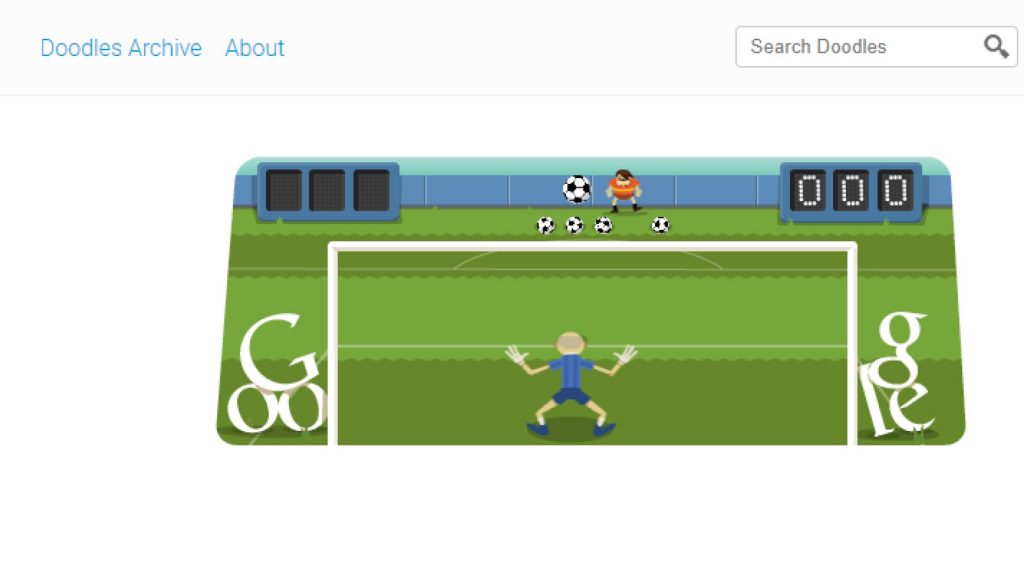 Football is one of the most famous sports in the world, and in 2012 Google celebrated the world’s most popular team sport with an interactive doodle. In Football 2012, the player had to take on the role of a goalkeeper and block as many shots as possible. Simple, but just as addictive. 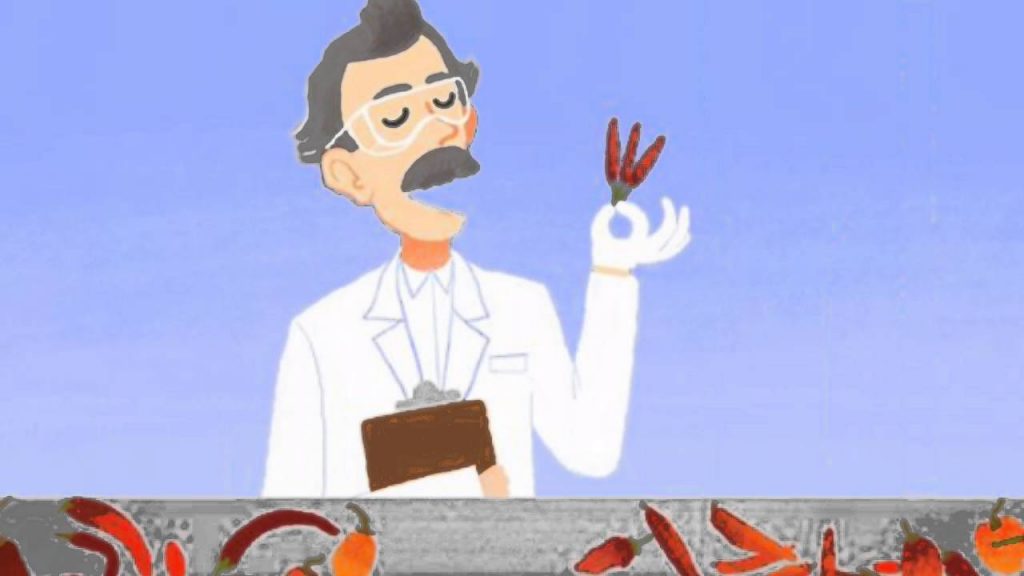 There are thousands of peppers each with different heat levels that are calculated on the Scoville scale. It is a tribute to Wilbur Scoville who first began testing hot peppers. Scoville Doodle came out in 2016 and it is one of the most popular Google Doodle games. It enables you to use the heat gauge against any pepper when tasked with tossing three scoops of ice cream to eliminate the heat. Despite not being the best doodle out there, it is quite handy, so you may just love it. 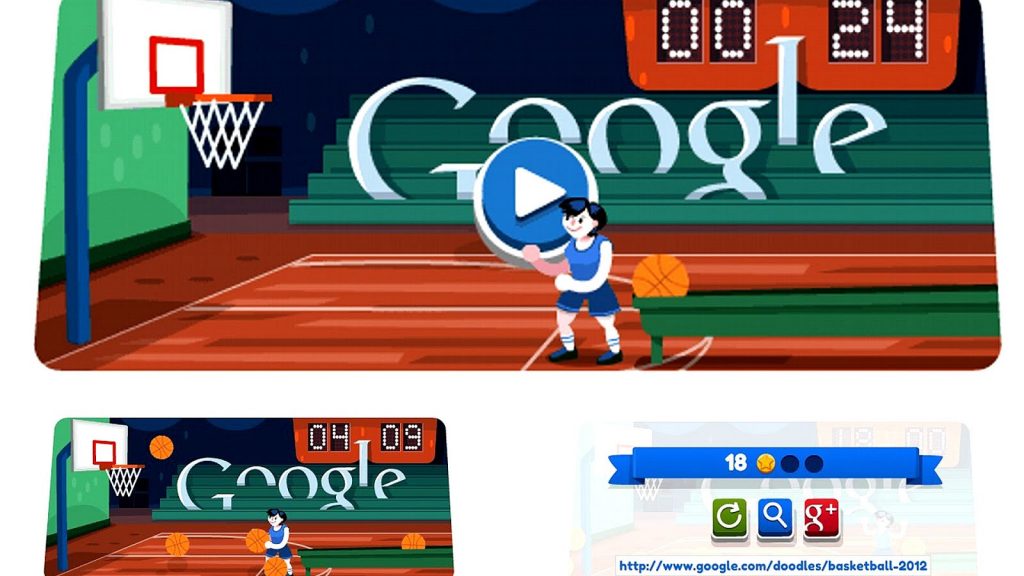 To go along with the Summer Olympics, Google released other entertaining mini-games besides the Soccer 2012 game, most importantly Basketball 2012. Just one key is enough to play. Players have to hold down the space bar and release it at the right moment to shoot for the basket. Apart from this title, Google also published interactive doodles for hurdling and canoeing which many of them are amongst the most popular Google Doodle games. 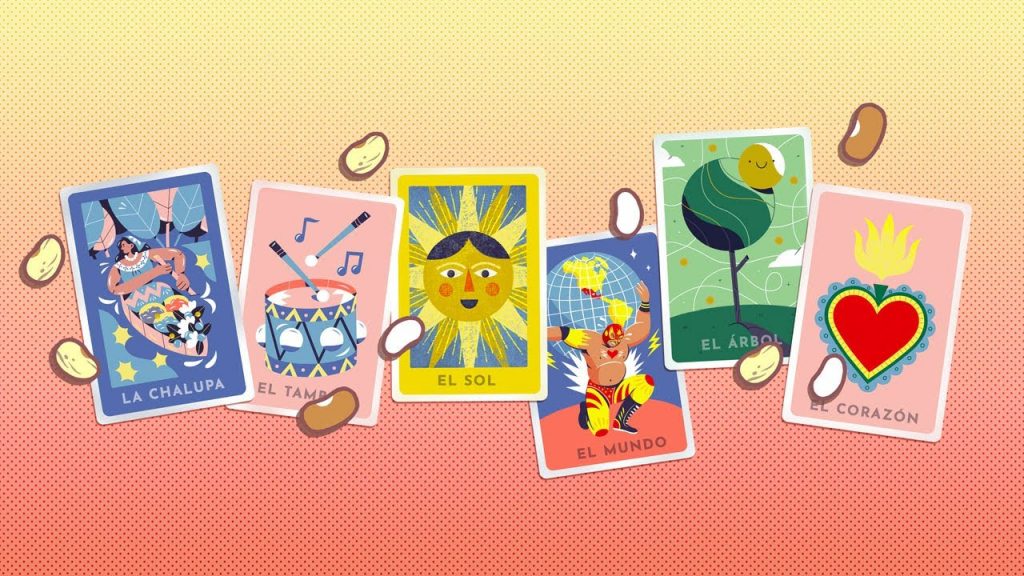 Did you ever play bingo? Well, check out Loteria Doodle, one of the most popular Google Doodle games that honors Cinco de Mayo, a Mexican tradition in which Loteria plays online with others or friends. It is similar to bingo, except that it replaces numbers and beans with cards in a truly Mexican manner. This game will automatically link you to people online. You can email a link and ask your friends to play with you.

Probably the most complex Google doodle game was released for Halloween 2016. In this game, you play the black cat Momo, who has magical powers and needs to defend her school against ghosts. Enemies can be attacked by following the symbol above their head and swinging the magic wand that way. It sounds easy, but it quickly becomes a challenge. 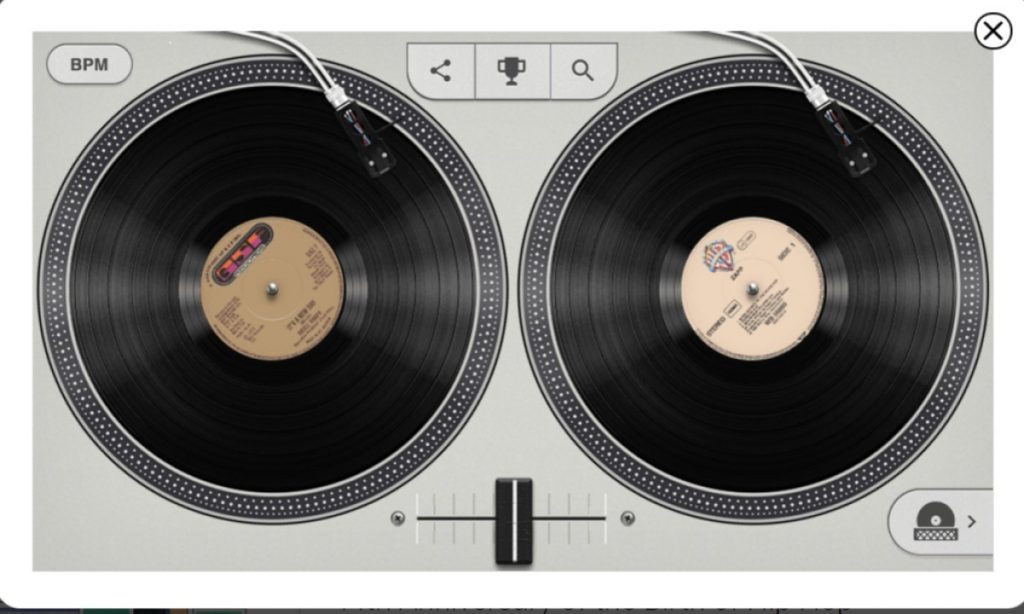 Embrace the art of scraping two records to make hip-hop music with Google’s famous hip-hop doodle. It first came to Google in 2017 to mark the iconic 44th anniversary of hip hop’s birth, and it lets you tap away with a dual turntable. You can utilize scratching and other tricks to create unique music on a dual surface setup. Make use of the BPM and other settings to produce and enjoy your favorite music. It is one of the best scratch doodles designed by graffiti artist Cey Adams and it provides some famous onboard track samples for the experience. 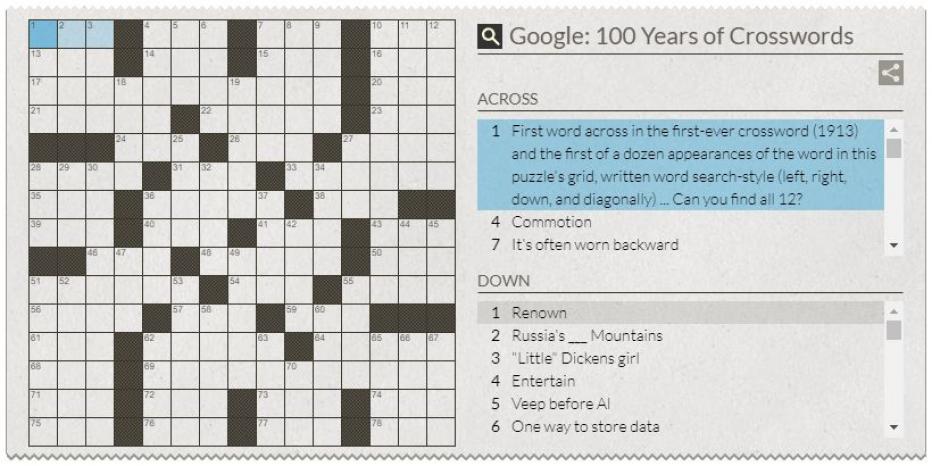 If you like solving crossword puzzles, on December 21, 2013, you were presented with a very pleasant surprise on the Google website. This doodle turned out to be a full-fledged and tricky crossword puzzle designed by professional crossword puzzle author Merl Reagle and since then it has become one of the most popular Google Doodle games out there.

Say hello to the world of “Doctor Who”, a fictional character from the hit long-running science TV series “Doctor Who”. In this Google Doodle game, you need to collect the letters of the “GOOGLE” one by one, taking an easy-to-see route that avoids the robot roaming around and murdering anyone who comes in contact. You should use the arms that are strategically placed on the map to clear the way to the alphabet and the telephone booth in both directions until you solve the whole range of “GOOGLE”. 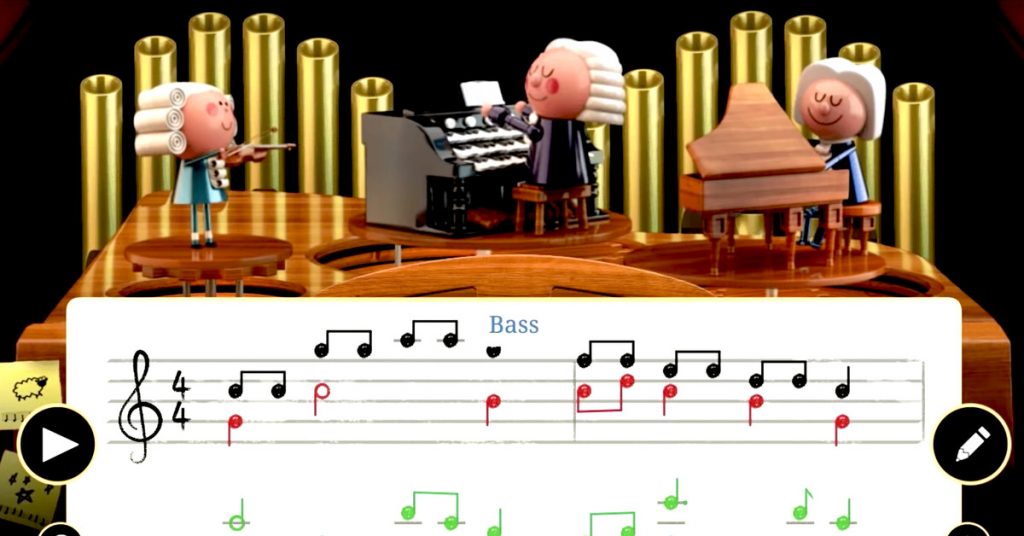 As a tribute to Johann Sebastian Bach, Google has built the first Google AI-powered doodle which allows you to experience music in a different manner by creating a melody. Define notes, use the lever to increase or decrease the notes and place them on a board along with your own. You can either play it raw or use the “Harmonize” button which utilizes AI and machine learning to build a rich melody based on raw input and 306 from the Bach format to create the perfect tune that you can play and download for later use.

10 Greek Dishes You Must Try