In this The Conjuring: The Devil Made Me Do It review, we will take a look at the newest sequel to the Conjuring series

by Gazettely Editorial
in Entertainment, Movies
Reading Time: 6 mins read
A A
0
Share on FacebookShare on TwitterShare on PinterestShare on WhatsAppShare on Telegram

In their latest case, demon hunter couple Ed and Lorraine Warren are dealing with a young man who suddenly becomes the victim of a paranormal creature in. Here the plot are similar to those of the first two parts. Unfortunately, the end result is only limited. We’ll tell you more in the Conjuring 3 review.

Uncanniness is born in the unknown. It flourishes in what we do not see, but only sense. It grows in the silence prior to the knock in the darkness from which we sense the horror coming. A remarkable understanding of this old creepy wisdom was demonstrated by James Wan when he breathed new life into the haunted house films with “Conjuring”, although he did not use any new groundbreaking means.

This masterpiece, which many websites voted “scariest film of the year” at the time, also marked the beginning of the most successful horror film series of all time, since it was not only followed by direct sequels, but a whole Conjuring Cinematic Universe was created instead.

By now, seven films have reached their audience around the haunted universe of the (real-life) demonologist couple Ed and Lorraine Warren. So far, none has succeeded in conjuring up the magic of the original – not even the one and only “Conjuring 2”, which was directed by Wan himself and proved to be quite successful. 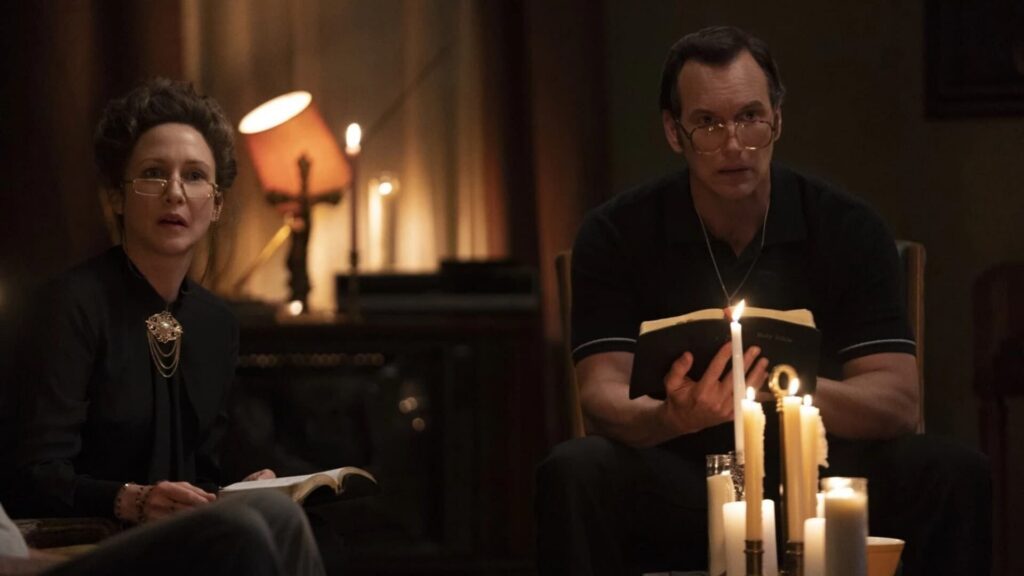 Therefore, the likelihood that Wan’s replacement Michael Chaves, of all people, would manage to do so with “Conjuring 3 – The Devil Made Me Do It” was not especially high from the start. The young director has already docked onto the “Conjuring” cosmos with “Llorona’s Curse” and thus obviously convinced James Wan so much that he may now follow up his legacy or, as demon tongues would hiss, put on his old hat…

It is a new case for paranormal investigators Ed (Patrick Wilson) and Lorraine Warren (Vera Farmiga): During the exorcism of little David (Julian Hilliard) something goes wrong – his demon jumps to another human host.

An incident with serious consequences: As a crime occurs, Ed and Lorraine must prove to the court that the crime only happened as a result of the involvement of supernatural evil, while simultaneously trying to stop the demon and thus save more lives from extinction. The mission doesn’t get any easier when the clairvoyant Lorraine comes to realize that this time, her beloved Ed is also in imminent danger himself…

Mirrors, shadows, the face of the wonderful Lili Taylor as she removes her blindfold in “Conjuring” and begins to doubt her sanity – they are the reflections of “what is there” that truly frighten, not the evil in concrete form. Genuine horror is created in the mind of the viewer, not on the screen, so it is so important to give space for the human imagination to unfold. 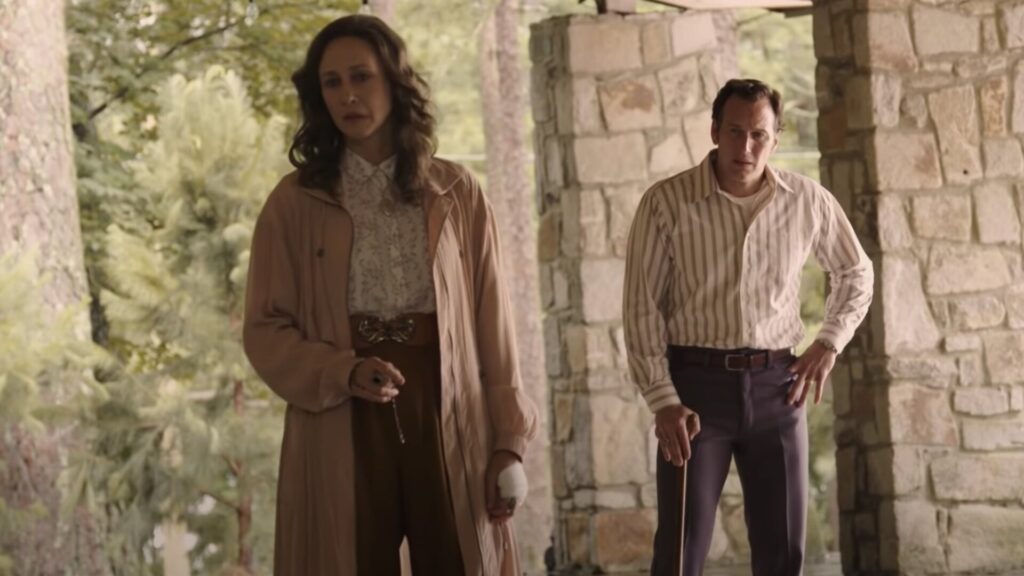 The likes of James Wan have fully embraced this knowledge – thus, and with an accurate sense of locating his devices in space and time, he produced an instant classic of the haunted house genre in 2013 with “Conjuring”. The exorcism theme was already present in Part 1, thanks to his real-life heroes Ed and Lorraine Warren, although not as dominant as it is now in “Conjuring 3”.

Certainly, there is a definite risk associated with this focus; exorcism has, after all, been dealt with 1,000 times in the cinema, in all levels of quality. However, this also applies to the haunted house motif – and after all, that didn’t hurt “Conjuring” either.

The Warrens in court

Conjuring: The Devil Made Me Do It, now tells us about a Warren case from 1981, for which actual court records also exist:  Arne (Ruairi O’Connor) is charged with murder and, with the help of the Warrens, must prove in court that he acted under the influence of a demon in order to avoid the death penalty.

However, in order to do so, the paranormal must first be proven to exist, which thanks to Lorraine’s ever-present abilities is not much of a problem. So if you’re expecting a tingling negotiation of levels of reality a la “The Exorcism of Emily Rose”, then you are on the wrong track. Here, the focus is clearly on ghost-and-demon action – and that takes place outside the courtroom, which we indeed hardly get to see from the inside.

At times we accompany the Warrens on their demonological investigations, at other times the young possessed man who is wrestling with his occupier. However, the fight with the demon in particular is neither special nor particularly good compared to what has been seen in this field in cinema in the past decades. 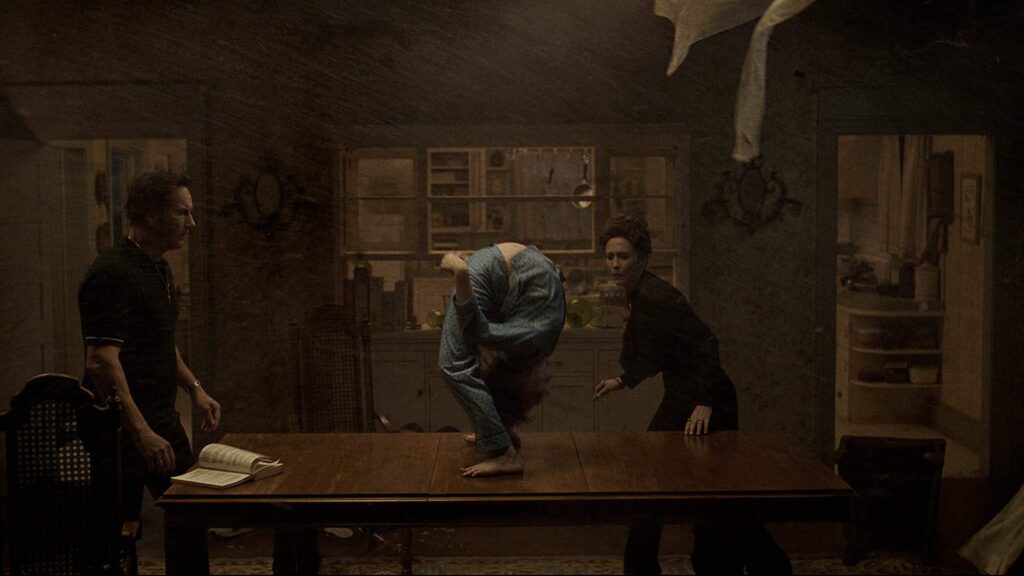 Given their familiarity, the effects used (twisted limbs, foaming at the mouth, fluorescent contact lenses…) do not really manage to shock the audience anymore – and this also applies to the rest of the scary tactics. There are some neat ideas – like a box of colourful breakfast cereals seemingly pulled from the shelf by ghostly hand, spreading on the kitchen floor and revealing a surprising guest – which are fun enough, but they never get to the tonsil core to really make the alarm go off.

However, the biggest problem is not on the paranormal side, but the human side: this time, the tormented demon victims just don’t succeed in making us emotionally involved in their fate, something that is also due to the actors. Ruairi O’Connor (“The Spanish Princess”) and Sarah Catherine Hook look nice and play okay, but Lili Taylor and Ron Livingston, who played the haunted couple in part 1, are a whole different calibre in terms of charisma and class. An actor’s calibre that would also have been needed here to bring the story closer to the viewer.

So what remains are the Warrens. Director Michael Caves and his co-writer James Wan (who, incidentally, did not write the first part himself) were apparently aware that it is only these two glamorous characters who set their story apart from the rest of the exorcists’ uniformity. Probably for this reason, they have (again) placed a much stronger focus on the private side of the demonologists. This is a great approach in itself, because who doesn’t want to know more about how the demon hunt can be linked to everyday life as a married couple? 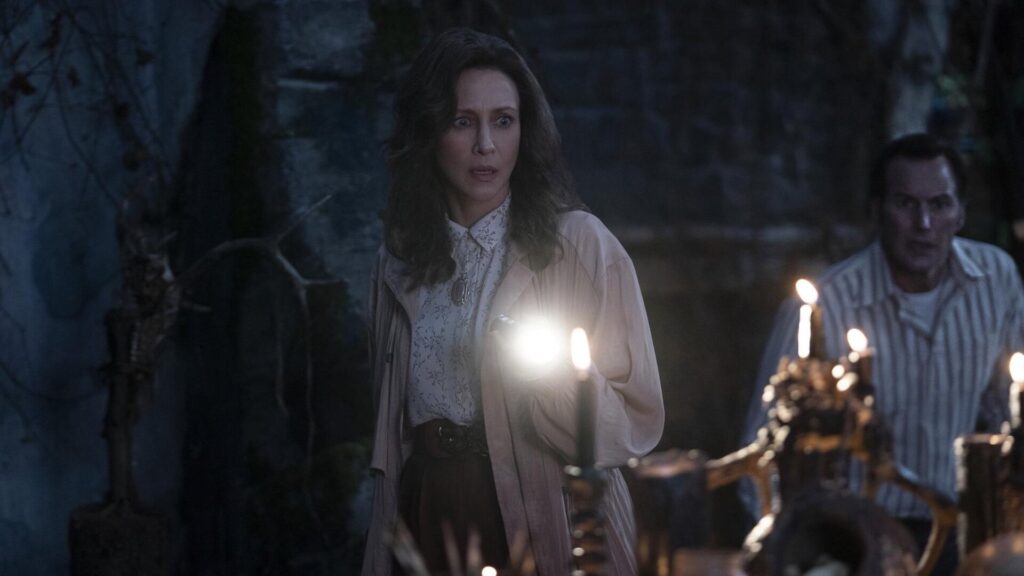 The screenplay, however, misses the first-rate opportunity to come up with clever insights in this regard and instead serves up an off-the-shelf getting-to-know-you story that, let it be said, has absolutely nothing to do with ghosts and demons. Another strange and unfortunate thing is that Warren’s daughter Judy (Sterling Jerins) hardly plays any role at all – remember how central her presence was to the work-life conflict of Lorraine in particular in Part 1.

What does one expect from a trilogy?

All of these small shortcomings gain in gravity if we remember the magic number 3, which is also not without significance in the films. Meanwhile, the third part with the “Conjuring” title has developed into a trilogy and would have been an obvious choice in order to scatter references (even self-ironic ones), to clarify cross-connections between the previous cases and thus to consolidate and round off the narrative cosmos. 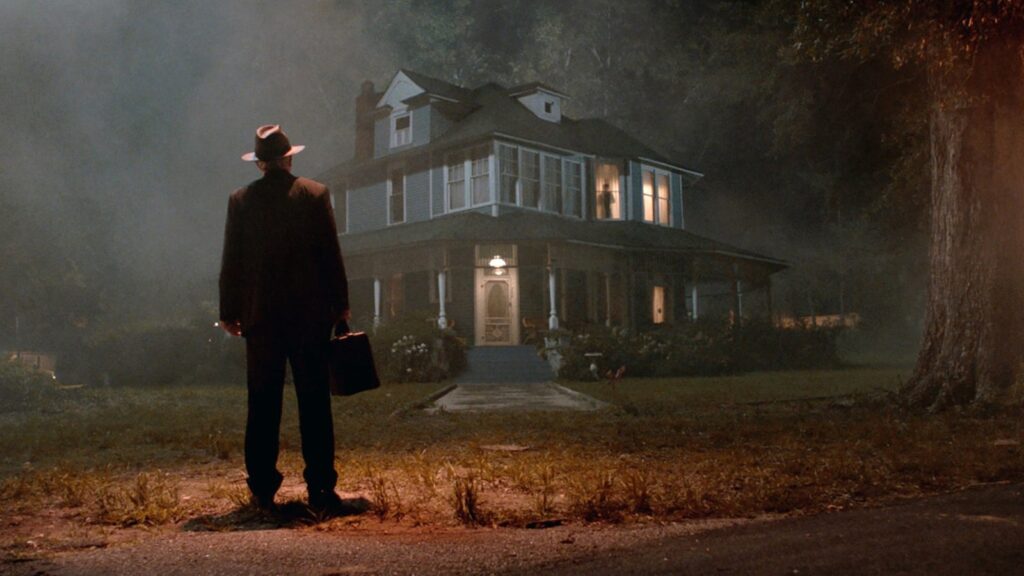 These possibilities are not used, or are only used very superficially. At the end, then, the question remains: is there going to be a fourth haunting? “In any case, Chavez indicated that there are still enough “true” stories” to be told about the Warrens…

Conjuring 3: The Devil Made Me Do It remains the weakest part of the series, although it has many strong individual scenes and a ghost-hunting couple who once again shine. This is not so much because the last third is too dramatic and the potential of the plot is not fully exploited. But rather because director Michael Chaves simply does not (yet) have the skills that James Wan once used to get the series off the ground.

What do you think about this Conjuring 3 review and the movie itself? Let us know in the comments section below.