Hyundai is launching the Santa Cruz, another compact pickup truck - although for the time being it will only be available in the United States.

by Gazettely Editorial
in Cars, News
Reading Time: 3 mins read
A A
0
Share on FacebookShare on TwitterShare on PinterestShare on WhatsAppShare on Telegram

Making a pickup truck with an open load floor from a standard passenger car is not a new idea. The idea began long before the Chevrolet El Camino from the 1960s, considered by many to be the ancestor of this type of car. Converting an SUV into a flatbed transporter is also not new, if you recall the Chevrolet Avalanche or the Subaru Brat and Baja models. All these creations had one thing in common, however: a fairly modest sales success.

At the North American International Auto Show 2015 in Detroit, Hyundai surprised everyone with a new take on this theme. Nevertheless, the quite harmoniously designed study has now actually become a production car, which Hyundai has now unveiled and which will be on the American market from the summer of 2021.

As a production car, the Hyundai Santa Cruz has one thing over similar concepts: an attractive design. Rather than simply sawing out the rear section of an ordinary station wagon, the Hyundai Santa Cruz is designed as if from a single mold. The crouched, elongated silhouette is visually accentuated by the high beltline and big wheel arches.

Compared to the six-year-old concept car, the Hyundai Santa Cruz is especially stunning at the front. While the 2015 concept car had a grim look on its face, the production model now features the familiar look of the Hyundai Tucson, with many smaller LED units embedded in the grille. 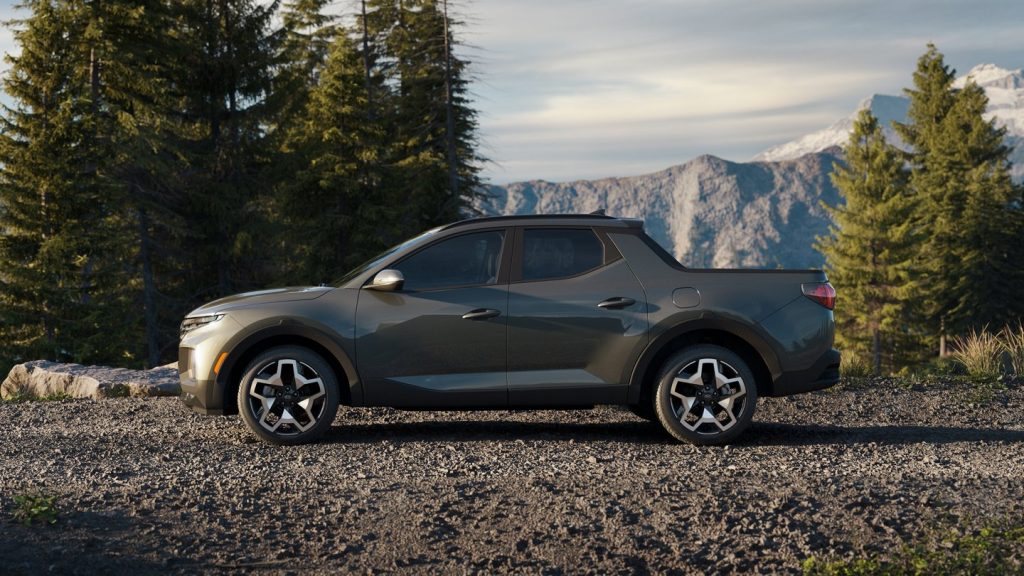 With the Santa Cruz, Hyundai is talking about having created a new vehicle category, however this is rather to be seen as PR (see above, history knows many role models). This is admitted indirectly by Hyundai itself: The Honda Ridgeline is specifically named as a competitor, which attracts customers with a very similar concept.

That said, the new Santa Cruz is slightly more compact than the usual midsize pickups in the United States. Measuring 4.97 meters in length, 1.9 meters in width, 1.69 meters in height and a wheelbase of an even three meters, the Santa Cruz undercuts some of its competitors by a considerable margin; considering U.S. standards, the Santa Cruz is practically a compact-class pickup.

It comes with a 2.5-liter direct-injection gasoline engine with 190 hp as standard. It is paired with a classic eight-speed torque converter automatic transmission. The second model will be somewhat snappier, with the same four-cylinder engine, but turbocharged and producing a lively 275 hp. This model is fitted with an eight-speed dual-clutch transmission for power distribution.

Standard on both variants is all-wheel drive, in this case electronically controlled all-wheel drive with variable power distribution, although there is no off-road transfer case. Quite understandable, since not just the front-end looks, but the entire platform is derived from the U.S. version of the Hyundai Tucson.

Nice Features for a Pick-Up Truck

Besides today’s usual assistance and safety systems, the Hyundai Santa Cruz also features exceptionally extensive smartphone integration. Wireless Apple Car-Play and Android Auto and an app for checking the vehicle status are now standard in modern vehicles, however, the “digital key” is still something special: It replaces the classic vehicle key, and vehicle owners can open and start the Santa Cruz by cell phone. At present, however, this only works on Android phones.

Prices are not yet announced for the Santa Cruz, but it is scheduled to go into production in June ’21. Hyundai is looking to hire up to 1,200 extra workers in the long term to produce the Santa Cruz in Montgomery, Alabama, where the U.S. Tucson also rolls off the production line.

The Korean company is attempting to enter the shark tank of the US pick-up market for the first time with the Hyundai Santa Cruz. Given the huge size of this market alone, an outsider can earn money there. But to really be taken seriously by the tradition-conscious pickup customers in the US, Hyundai will need some convincing. In comparison to the unlucky Honda Ridgeline, the looks chapter is at least well done.

It remains to be seen whether a classic U.S. pickup buyer will have more than an entertained chuckle for a towing capacity of 1.5 tons and a loading area that is just 125 centimeters long. What do you think about the 2022 Hyundai Santa Cruz?