Has the Game of Thrones season finale done any permanent damage to the series? Absolutely not. So even if you were left disappointed by the finale, it's worth returning to the world of Westeros one more time.

by Gazettely Editorial
in Entertainment, TV Shows
Reading Time: 4 mins read
A A
0
Share on FacebookShare on TwitterShare on PinterestShare on WhatsAppShare on Telegram

Is it possible for a season finale to ruin an entire TV series? According to the reactions to a recently released video for the final season of Game of Thrones, the obvious answer is yes. The trailer, which focuses on the final episodes of the fantasy series, has attracted comments ranging from disappointment to anger.

For many people, one thing is clear: the Game of Thrones legacy has been damaged for good. Given the knowledge of the series’ outcome, it doesn’t make sense to get lost in the world of Westeros again. Rewatching Game of Thrones? No way, that’s the conclusion. However, let us take up the cudgels. Even the second, third or fourth series rewatch is a worthwhile experience.

Over the course of its eight seasons, Game of Thrones has evolved remarkably – and that becomes particularly clear when you watch the series within a few days or weeks, instead of spread out over several years. However, let’s first briefly jump back to where it all started.

Game of Thrones launched at just the right time

HBO was at an exciting point when Game of Thrones launched in April 2011. Its rivals were enjoying success with series epics like Breaking Bad. The majority of the big series that made HBO famous had been phased out. True Blood became the cable channel’s ultimate flagship: the vampire series has sex and violence in excess. It was the perfect breeding ground for Game of Thrones. 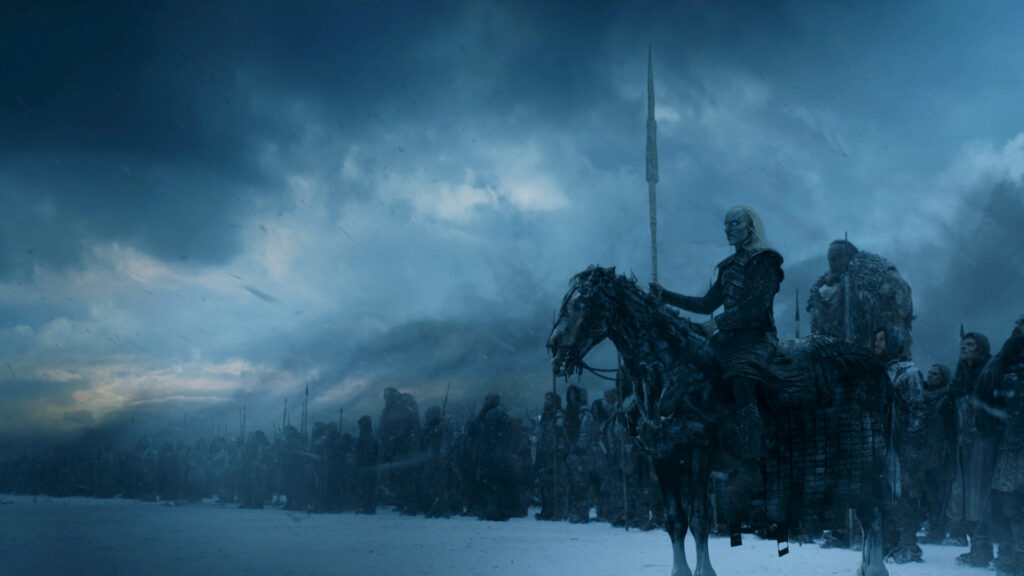 On the one hand, the screen adaptation of George R.R. Martin’s series of novels of the same name was fueled by the fantasy boom of the 2000s driven by Harry Potter and The Lord of the Rings. On the other hand, it was driven by the curiosity to experience such a story without compromise from week to week on the home screen.

Sophisticated historical dramas like Rome and Deadwood paved the way for Game of Thrones: the HBO series seemed big and impressive by the standards of the time. Looking back, it was nonetheless miles away from the gigantic series blockbuster it turned into by the end of the decade.

In total, Game of Thrones underwent three phases. The transformation is quite remarkable, despite the fact that it has only been noticeable to a certain extent over the years. Most of the time, when things change bit by bit, you hardly notice them. This is exactly where the rewatch gets interesting: Game of Thrones changes tremendously over the course of its eight seasons.

What is particularly mesmerizing is how the first seasons give the illusion of something greater with just a few, but more precise touches. For example, there are the skilfully scattered references to the White Walkers and the fabulous intro combined with the unique music, giving us a sense of the fantasy world. 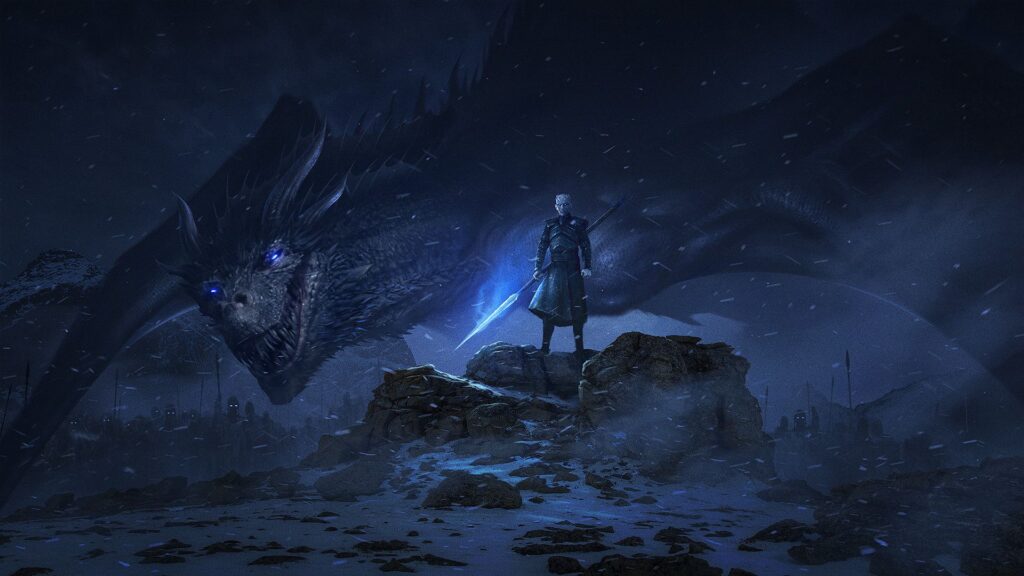 Game of Thrones on its way to become a series blockbuster

Initially, Game of Thrones, through its combination of explicit scenes and realistic drama, frequently feels like a cross between other HBO hits like The Sopranos and True Blood. Meanwhile, in the background, the show is working single-mindedly toward the next stage of development. Eventually, the wide-ranging battles no longer take place off-screen, but become the climax of an entire season.

Why Game of Thrones is the greatest TV series phenomenon of the last ten years is a result of many different things, including the influential book and iconic characters. However, a crucial point is also that Game of Thrones as a series production has never been afraid of evolving.

The evolutionary stages of the series never came without notice. The Battle of Blackwater at the end of Season 2, for example, highlights one of those game-changing moments. For the first time, Game of Thrones shows what is possible. After that, further leaps follow to do justice to the story’s dimension. Seven kingdoms are fighting each other here, after all.

What the critics of the later Game of Thrones seasons often tell is that the creators behind the series have replaced fine, well-considered drama with heavy-handed spectacle. Where characters and dialogues were once the driving force of the plot, at the end only ill-considered bombshell dominates, they say. 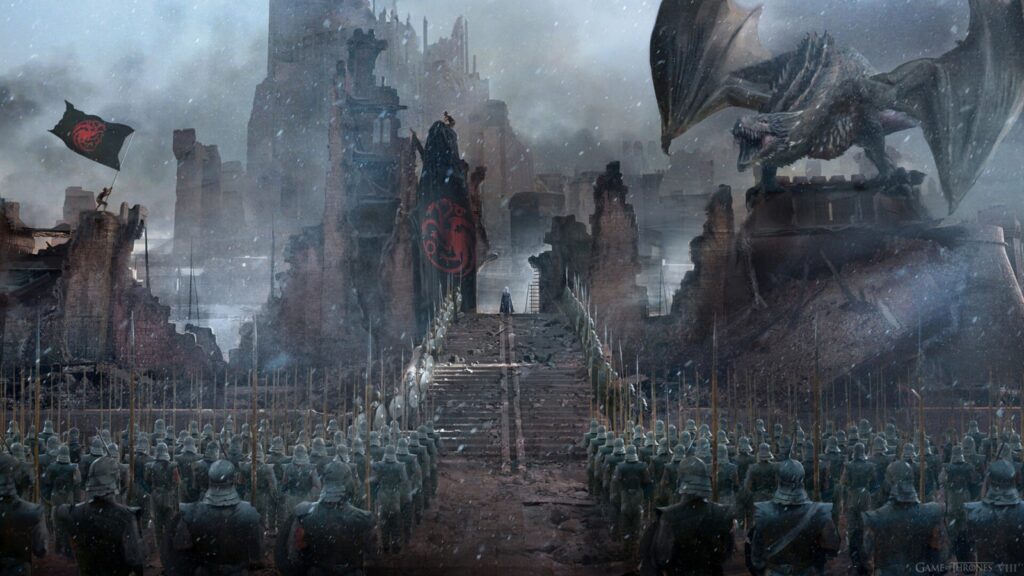 The transformation of Game of Thrones is constant

Is that true, though? To us, the series’ – thoroughly radical – transformation to become the biggest series blockbuster of our time is much more a stirring, consistent movement: Plots that began in sparsely lit rooms grow to the point where they end up having to be fought out on huge battlefields.

Something inconspicuous in Game of Thrones turns into an overwhelming storm that eventually has the power to turn the world we’ve come to know in detail over eight seasons upside down, and in some cases even tear it down completely. Goosebumps are inevitable at every rewatch.

Regardless of how the story ends in detail: Witnessing the battle for the Iron Throne grow ever larger and more complex remains one of the series’ greatest charms for the viewer. Game of Thrones leaves behind the feeling that one has witnessed a formative phase (in a fictional world). Not many series manage to do that. It’s phenomenal.

What’s your take on it? Do you want to watch Game of Thrones again? Or rather not?