Get ready to discover some awesome concepts from the leaders of the industry!

by Gazettely Editorial
in Science
Reading Time: 8 mins read
A A
0 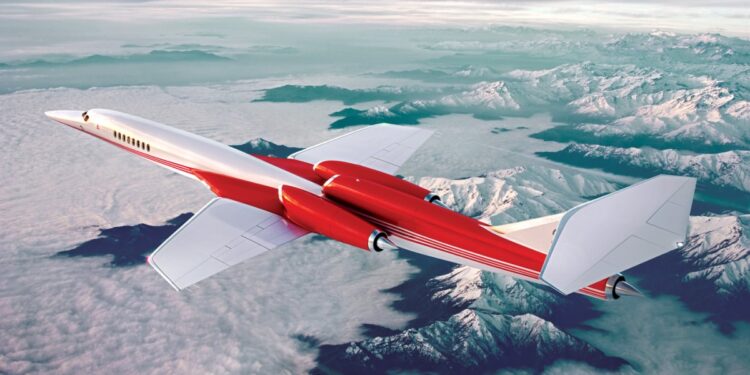 Looking ahead, what will the aircrafts of the future look like, say between 2025 and 2050? We can get a pretty good idea because manufacturers are already working on it, at least on concepts, which we will introduce here (notably those of a study carried out under the auspices of NASA).

Like car manufacturers’ concept cars, these are not the first images of planes that will certainly exist one day. Instead, they are studies showing the fields on which engineers are working. These attractive images illustrate strong ideas: reduction of fuel consumption and greenhouse gas emissions, greater capacity, new materials, more efficient engines. Aviation is still going to progress a lot! Stay tuned to take a look at the top 17 aircrafts of the future. 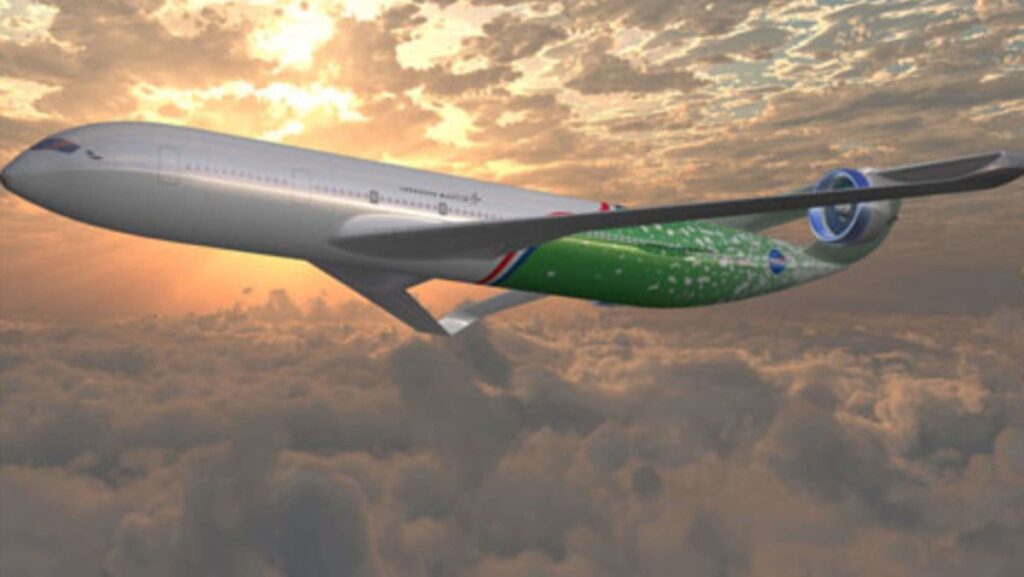 A concept from Lockheed Martin for a fuel-efficient twin-engine medium-haul aircraft. The jet engines have a very wide opening with a very narrow central airflow. Especially noteworthy is the extravagant, more precisely rhomboidal wing. 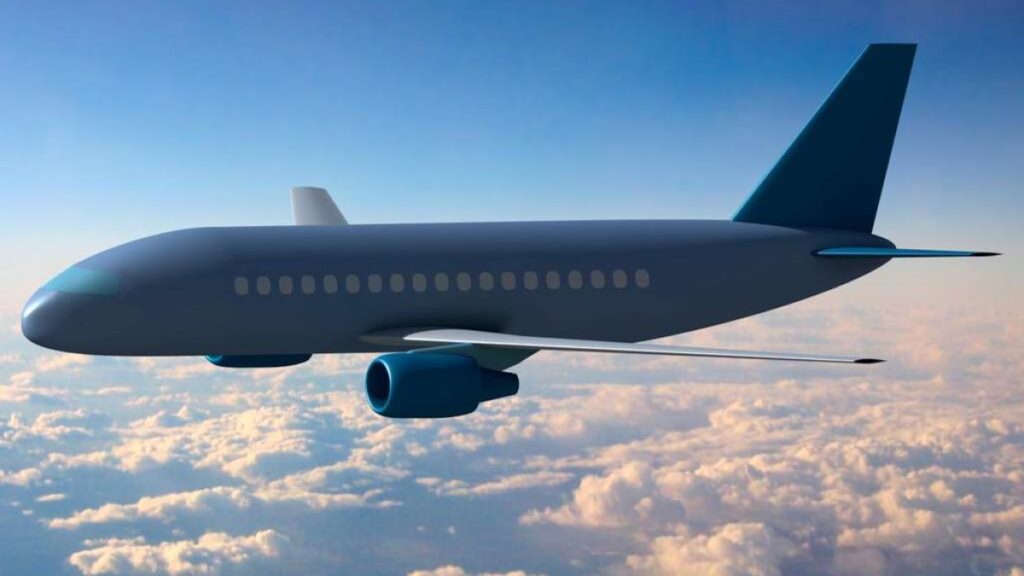 This airplane looks very conventional, but it’s not at all. For the Select ( aka Silent Efficient Low Emissions Commercial Transport), Northrop Grumman designed a small capacity aircraft – 120 passengers – with very low carbon emissions, using shape memory alloys, nanotechnology and ceramic composites. The Select is designed to land on short runways (1,500 meters) to serve small airports, thus allowing the reduction of air traffic. Stay tuned for more aircrafts of the future. 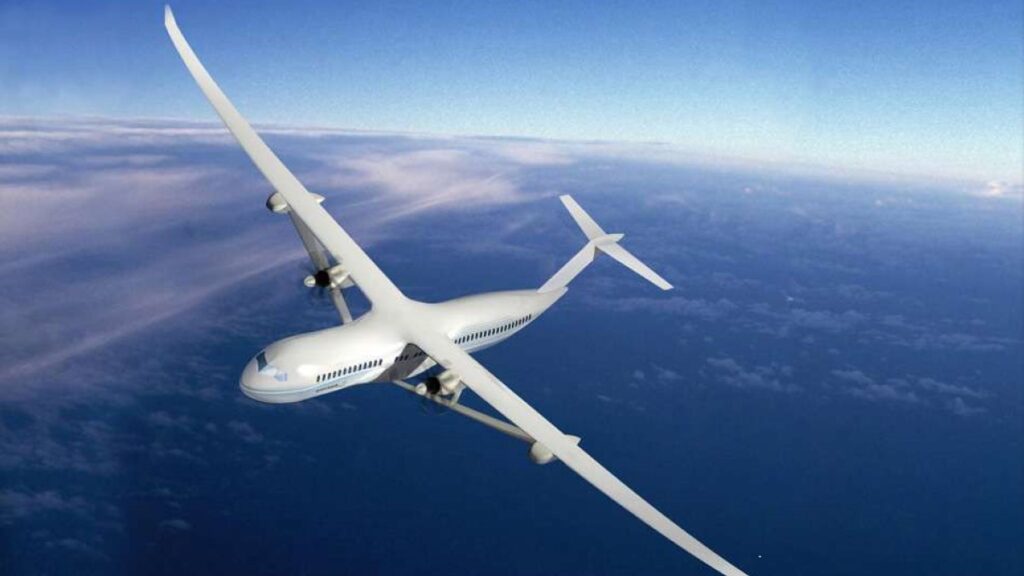 NASA has made aircraft manufacturers work on much more economical aircraft concepts. The answer is Boeing’s “Sugar”, which stands for Subsonic Ultra Green Aircraft Research, and is called Volt. Its engine would be… hybrid, with a semi-electric propulsion system that could be used during takeoff, reducing noise and fuel consumption. The latter would be decreased by 70% and the overall reduction in energy (taking into account the electric phases) would be 55%. It is also worth noting that the wings are very long (wingspan to depth ratio). 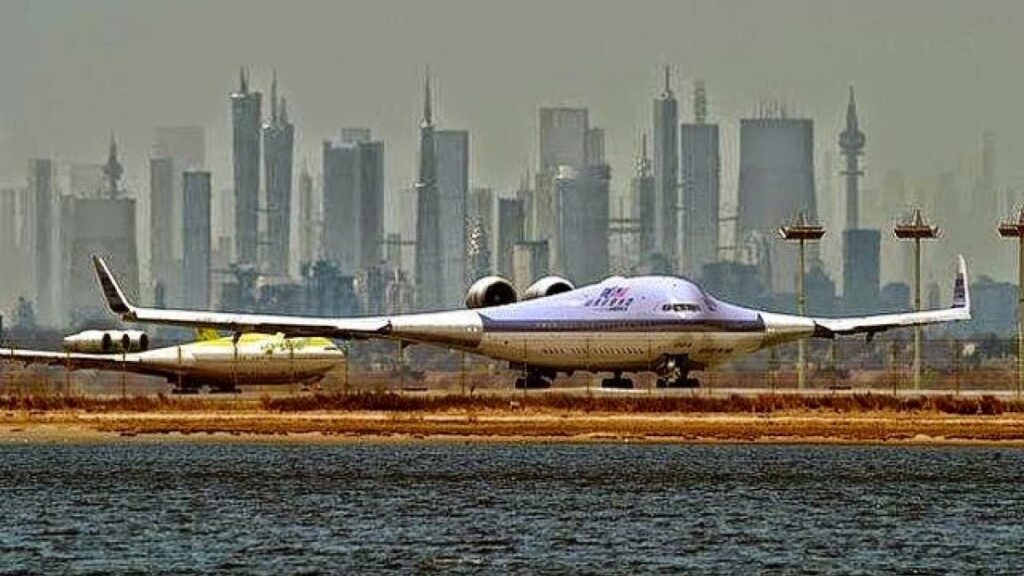 The concept of the Boeing X48 BWB (Blended Wing Body) has inspired some jokers who used this image published in the magazine Popular Science to announce, during the presentation of the Airbus A380, this “Boeing 797” which could carry a thousand passengers. It was just a joke (or hoax) but reality could one day catch up with fiction… Stay tuned for more aircrafts of the future. 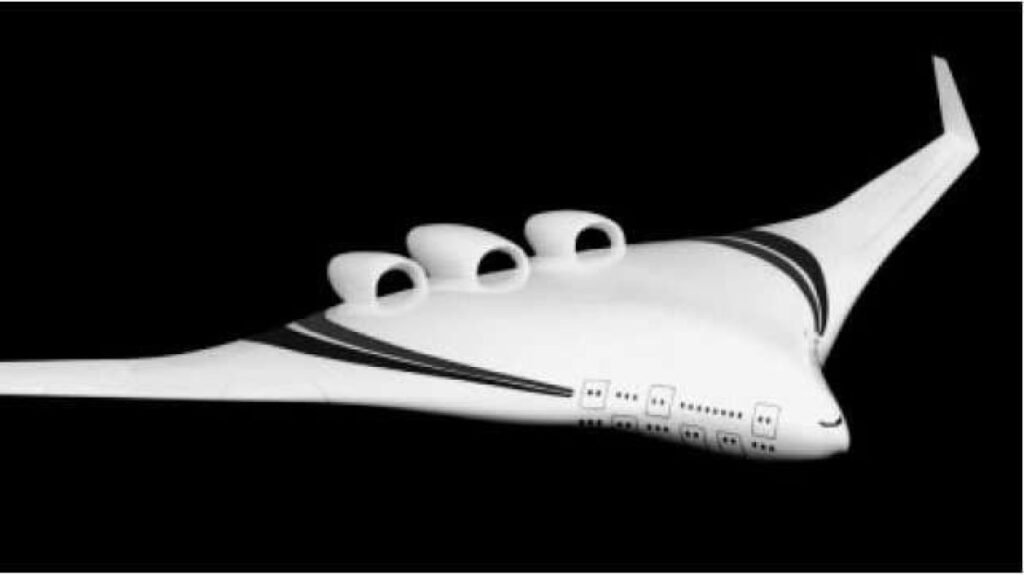 The Boeing and NASA have cooperated on a flying wing project which has led to the development of prototypes in scale models, the X48 B and C. The idea is to create a Blended Wing Body (BWB), which means “fused wings and fuselage”. We can see here a synthetic image of what it could be in the future. The flying wing principle presents many challenges (stability, low speed flights, pressurization…). 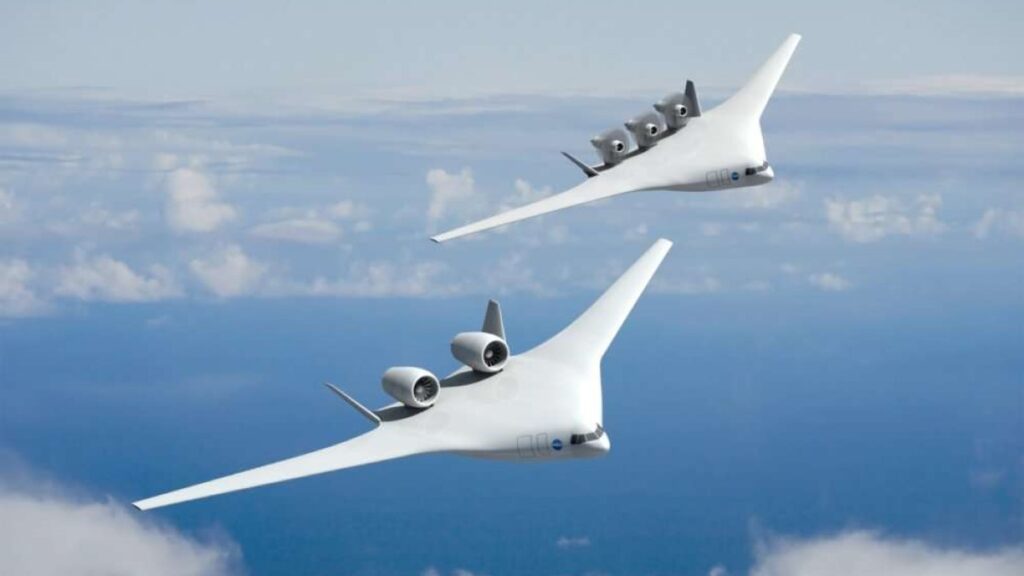 Boeing’s X48 project is based on a McDonnell Douglas study of a flying wing conducted in the 1990s. This project continued in the form of a collaboration with NASA and the British University of Cranfield for an aircraft with load-bearing fuselage. Following the X48A, which was left on the drawing board, two scale models called the X48B were built and test-flown. The X48C was also flight-tested between 2012 and 2013.

Boeing presented this project to Nasa in 2011 as one of its 2025 aircraft studies. This is an artist’s impression of two types of engines. The engines are installed on top, which will reduce the noise perceived on the ground. Stay tuned for more aircrafts of the future. 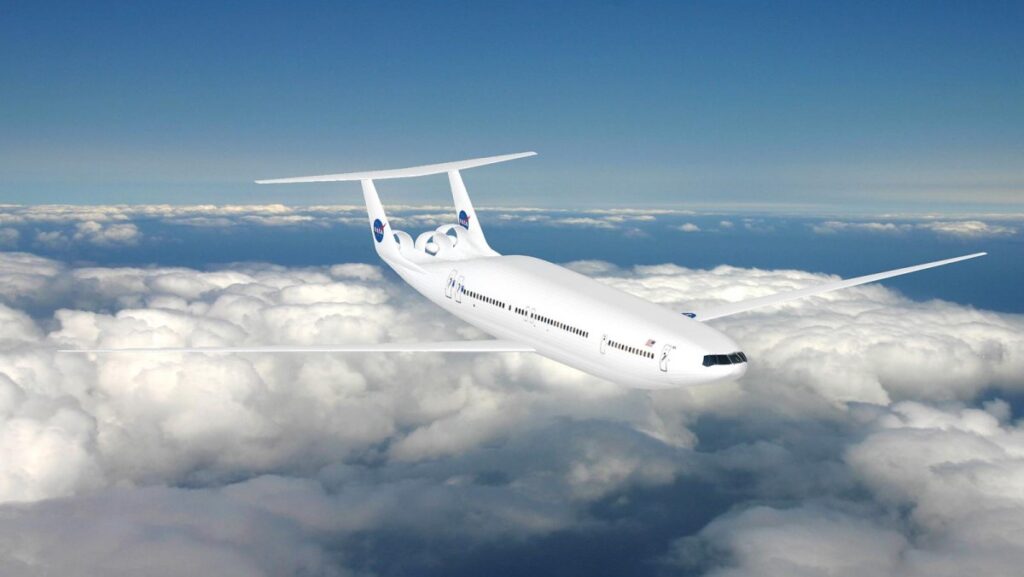 The Massachusetts Institute of Technology (MIT) D8 “double bubble” proposes a large cabin, for 180 passengers on this project. It uses composite materials to lighten the airframe, and the engines, which are positioned above the airframe (which reduces noise), are dual-flow, but with a central flow (hot, because it comes out of the turbine) that is very narrow, whereas the peripheral flow (from the large front fan) is wider. 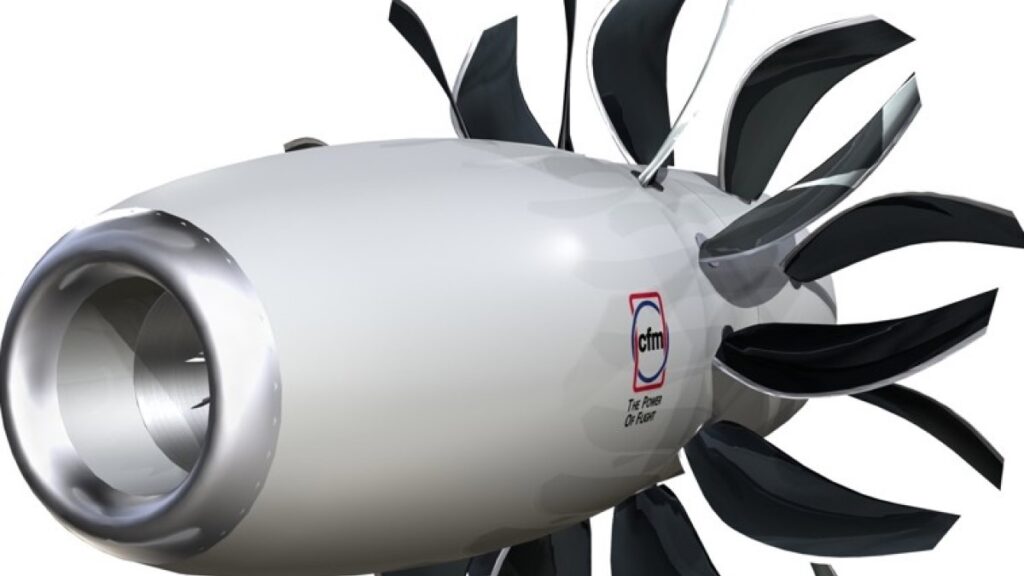 A number of engine manufacturers, notably Snecma (part of the Safran group), are currently studying the “open rotor” concept. The concept is not new, having been tested in the 1980s under the name of UDF (unducted fan), and then abandoned. However, it is now back on track, with the hope of reducing consumption by 25%.

Like in a current turbofan reactor, the central part is a turbine that ensures thrust with a hot and accelerated air flow. Surrounding it, a “blower” driven by the same turbine functions somewhat like a propeller. It generates a ring-shaped flow around the hot flow. The concept of the open rotor is to eliminate the engine fairing and to install a fan in the form of two counter-rotating propellers (turning in opposite directions). 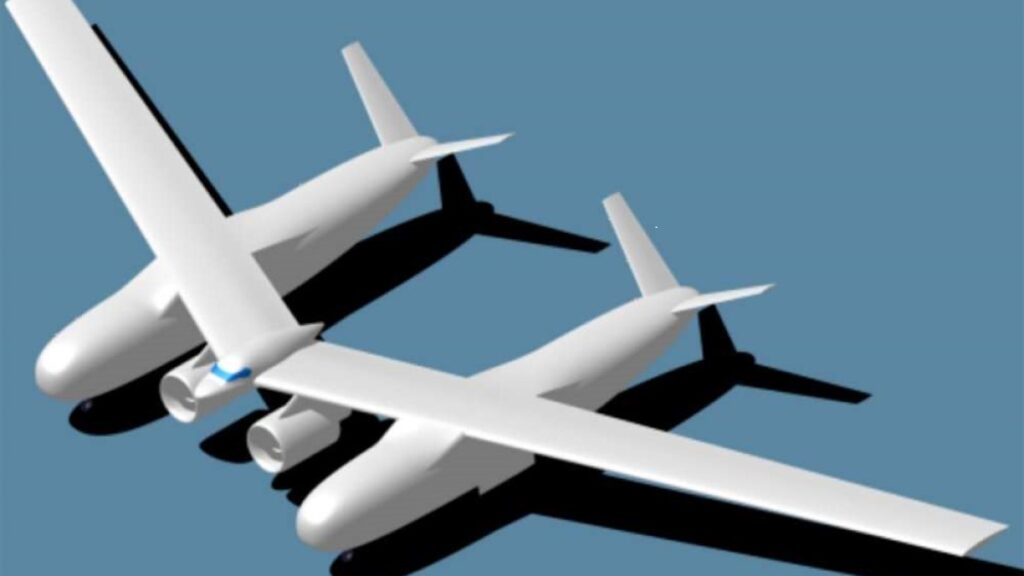 If you want to increase the capacity of an aircraft, how about using two fuselages instead of one? This concept comes from Northrop Grumman and is remarkable for its high wings, which are fixed on the top of the plane. Stay tuned for more aircrafts of the future. 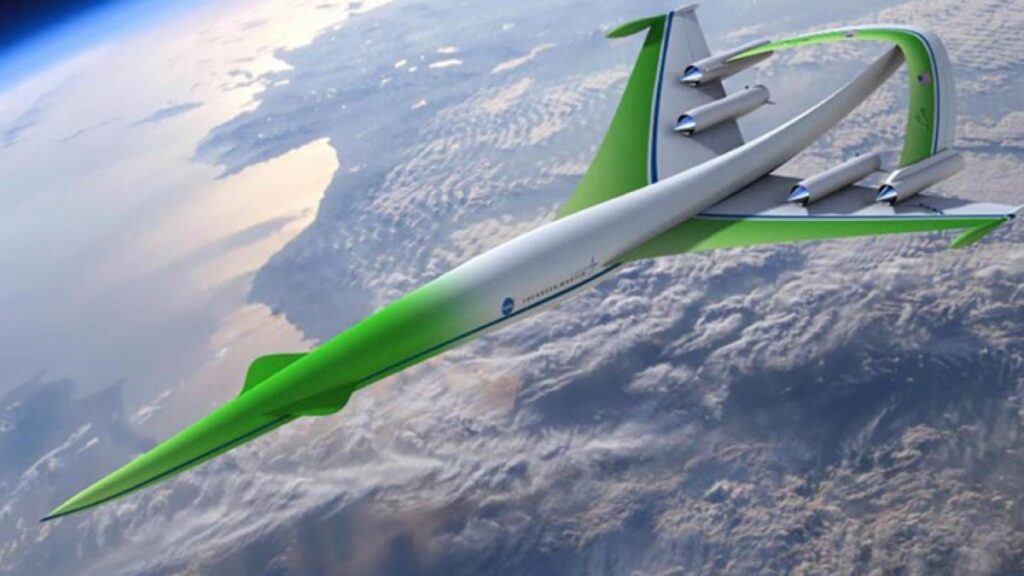 This supersonic aircraft imagined by Lockheed Martin has wings that are shaped like a pronounced V and the engines are installed above. This layout should prevent, or greatly reduce, the “bang”, the massive noise that follows a plane moving faster than sound waves, thus breaking the sound barrier. Such an aircraft could therefore fly supersonically over the continents. 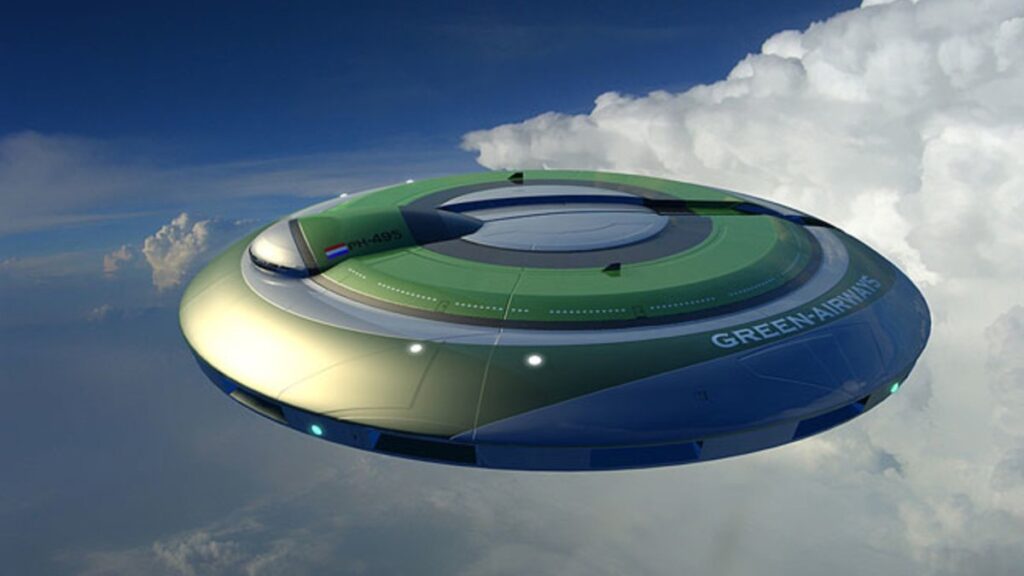 The team of the CleanEra project, led by Etnel Straatsma, from the Delft University of Technology (Holland), has designed a gigantic flying saucer, a shape that is supposed to reduce consumption. The Dutch team is investigating various solutions for more fuel-efficient aircraft, including a return to the propeller. Stay tuned for more aircrafts of the future. 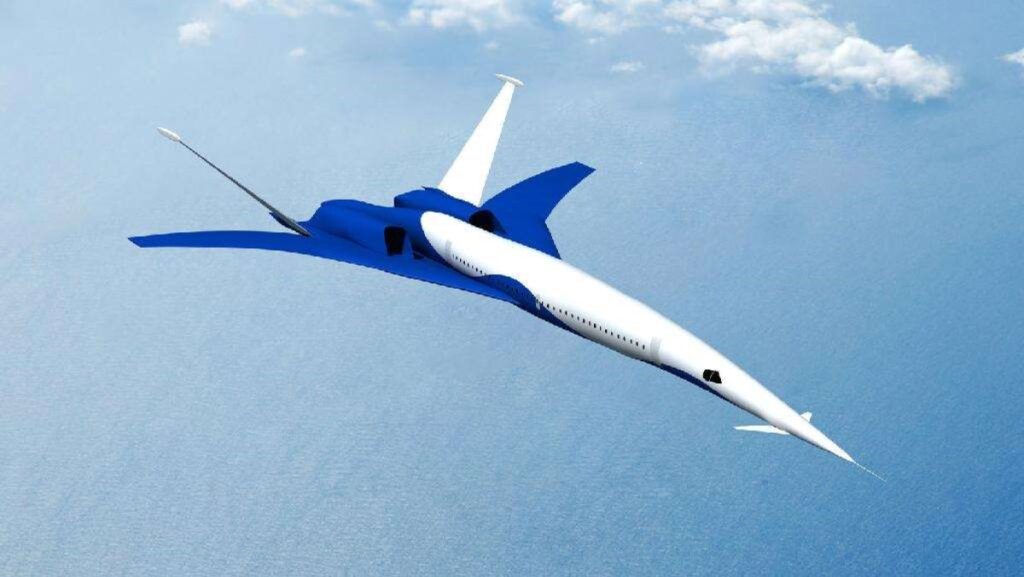 Icon-II is a concept by Boeing for a silent supersonic aircraft, or at least one that is almost free of supersonic bangs. Unlike the Concorde, which had certain constraints, it could fly faster than sound over populated lands. One can notice the engines placed above the wings. 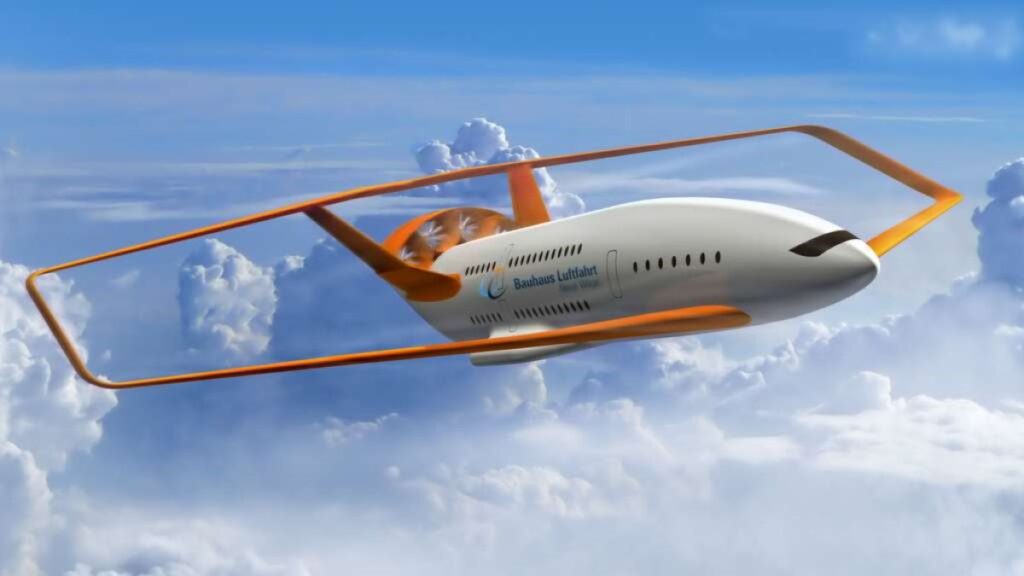 Another idea explored to reduce aerodynamic drag at the wing tips: do away with them! This can be done with a rhombohedral shape, closing on the empennage. From an aerodynamic point of view, this shape has an infinite aspect ratio (the aspect ratio being the ratio between the length of the wing and its surface). This is not a new idea and has already been tested. There are problems of material resistance and too much rigidity. New materials could make it possible… 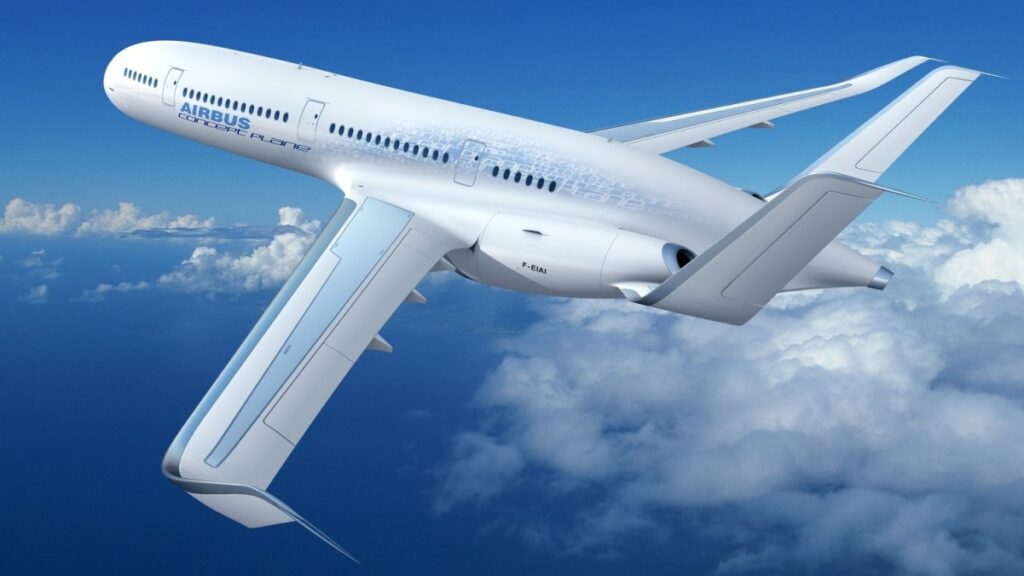 In this aircraft concept designed by Airbus for 2030 to 2050, the wings are longer and thinner, for improved efficiency, and the fuselage is not tubular but wider, giving a larger interior volume. The jet engines are installed against the fuselage and not under the wings. Airbus believes that the reliability of future engines will be greater and will reduce the requirement for great accessibility. The layout reduces noise and enables different wing designs. In this case, the tail unit is U-shaped, without a central tail. 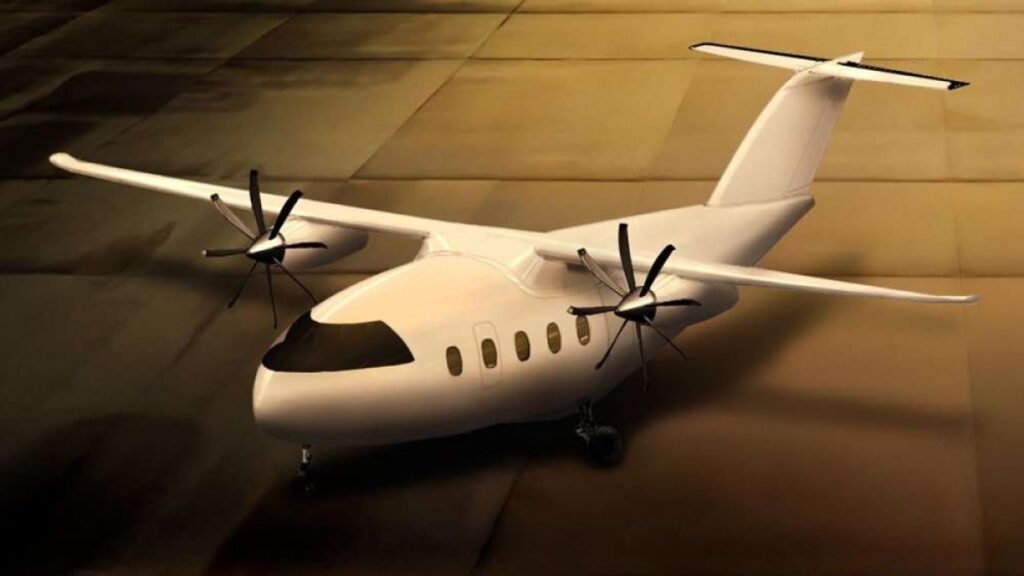 In order to relieve air traffic congestion, planes can be reduced in size and traffic can be spread over smaller and more numerous airports. To that end, GE Aviation has designed a small 20-seat aircraft powered by turboprop engines, or propellers, that enable short takeoffs and landings. A fuel cell would produce the electrical energy on board. Stay tuned for more aircrafts of the future. 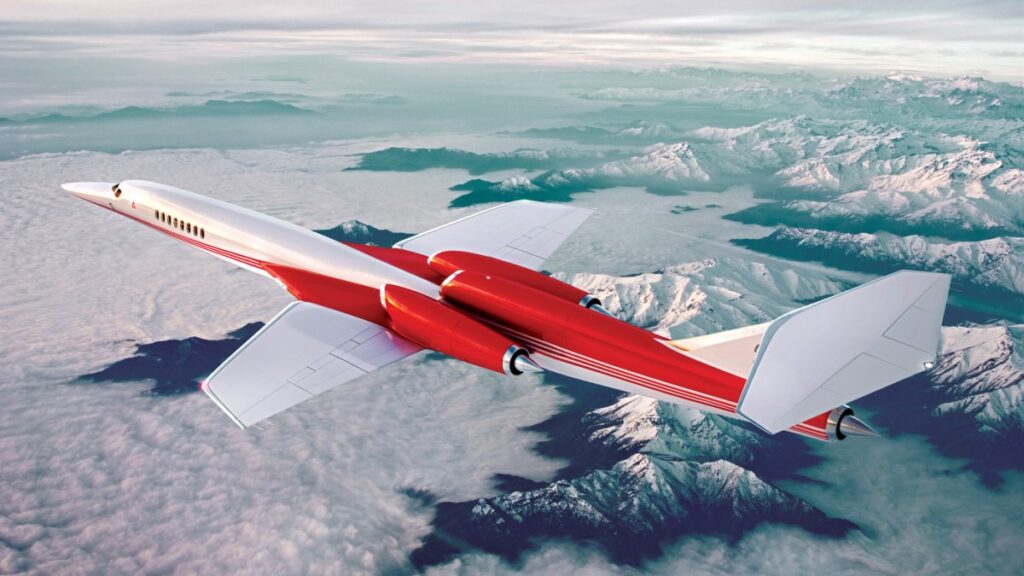 One excellent solution to minimize aircraft noise on the ground is to mount the engines on top of the aircraft, a simple but effective solution. So why wasn’t this implemented before? Well, because maintenance crews don’t like it…

Having easy access to the engines is not only a guarantee of safety, but also of economy since it is faster. Installing them on the fuselage or wings, or even incorporating them into the body of the aircraft, such as in flying wings, has always scared aircraft manufacturers. But what if the aircrafts of the future have more reliable engines? Stay tuned for more aircrafts of the future. 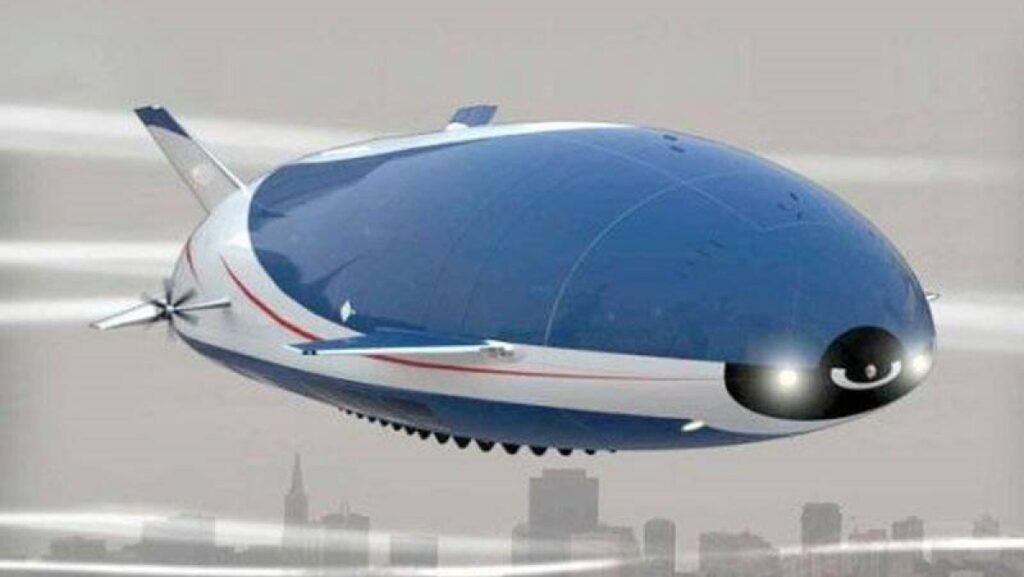 Airships are making an eternal comeback: they are economical, spacious and capable of transporting enormous loads. However, they also have some drawbacks: they are slow, very difficult to maneuver (especially in strong winds) and they are very bulky.

Nevertheless, the idea is still valid, particularly for freight transport and surveillance missions. Aeros, a company specializing in this field, has introduced a project for a kind of luxury air yacht, the Aeroscraft ML 866. The future is uncertain, but it shows the persistence of the idea of lighter-than-air “aircraft”.

7 Reason Why You Should Start Sleeping Naked 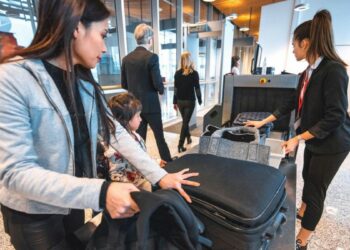 At airports, we trust scanners, security cameras and special security staff to detect weapons, narcotics or suspicious people before we...

How Does a Virus Go to Sleep, and How We Can Wake Them Up?

A Look at the Oldest Living Animal Species