From India to England and from US to North Korea, here are the biggest stadiums of the world

by Gazettely Editorial
in Sports, Football
Reading Time: 5 mins read
A A
0 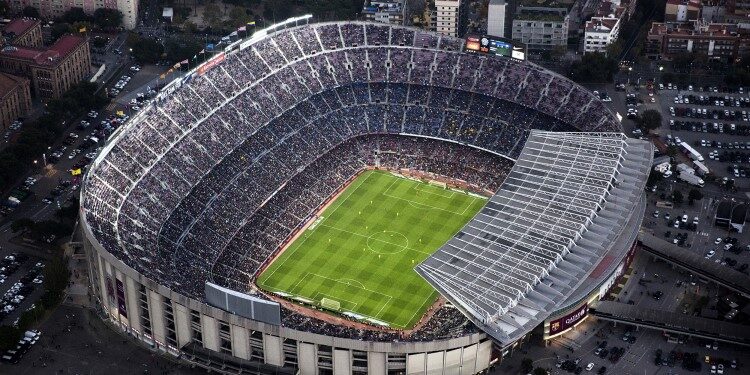 These days football is by far the most famous sport in the world. One simply cannot imagine football without its stadiums, some beautiful venues which football matches are held inside them. There are lots of great football venues all over the world and in this article, we will introduce some of them to you, namely the top 10 biggest football stadiums in the world. 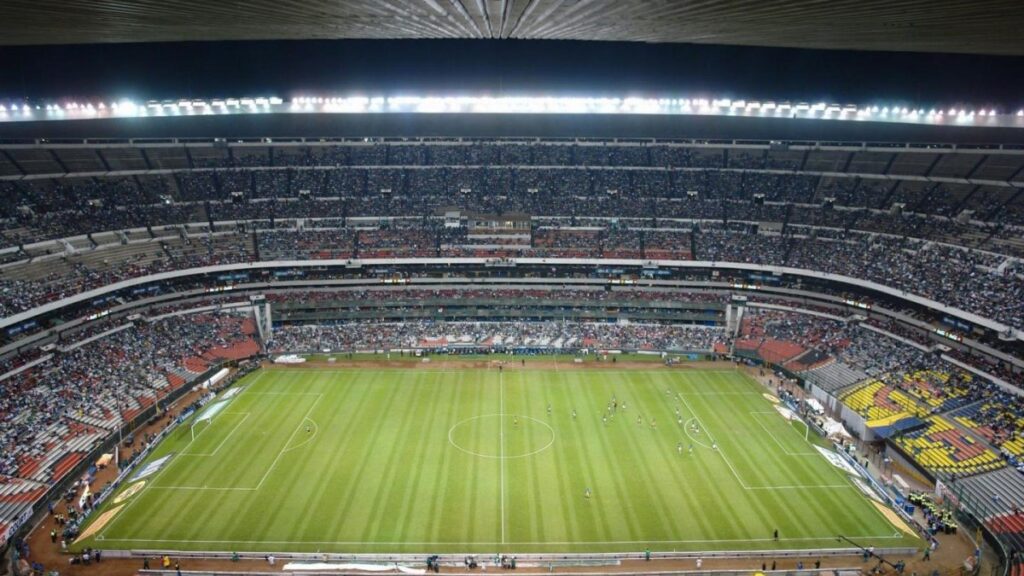 It is not only in Europe that soccer is popular, as this list of the largest soccer stadiums around the world will show, they also love soccer in India. With a capacity of 85,000, the Salt Lake Stadium in Kolkata is the biggest in the country. Two of India’s biggest soccer clubs play their matches here: East Bengal and Mohun Bagan.

This stadium was constructed in 1984 and had a capacity of 120,000 people. At one time a record number of 131,000 visitors was recorded. It was at that time the third largest football stadium in the world. However, in 2011 the stadium was completely renovated. It became a modern stadium that meets all security requirements. 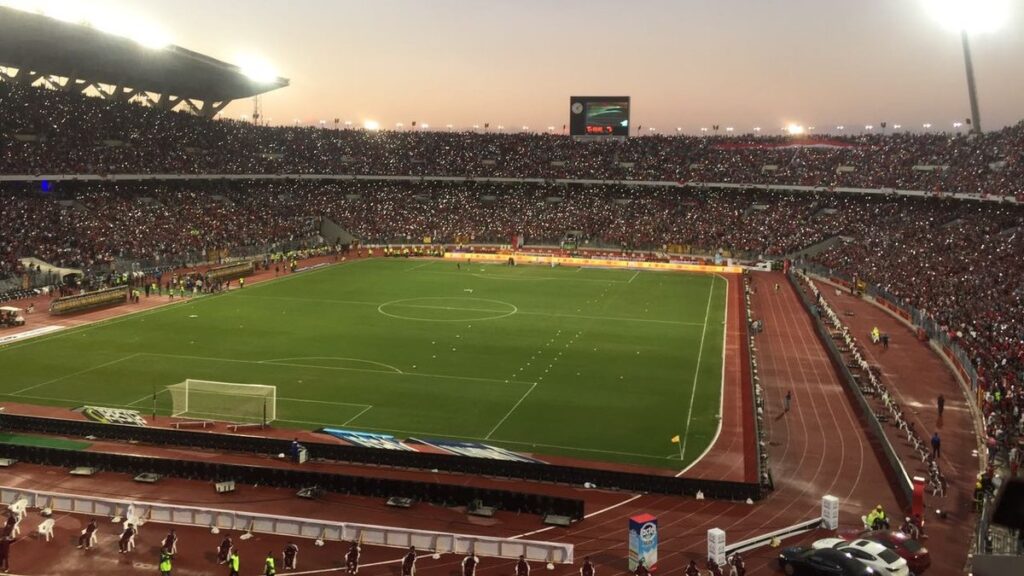 The Borg El Arab Stadium is located in, how could it be otherwise, Borg El Arab, a major city in northern Egypt. The stadium, with seating for 86,000, is home to the soccer clubs Al-Ittihad Alexandria and Smouha SC. The Egyptian national football team also visits the stadium regularly.

It was built for the Egyptian bid for the 2010 World Cup. While Egypt was not awarded the tournament, they received the nice words from FIFA Vice-President Jack Warner: “It is a fantastic stadium. It is one of the best in the world”. 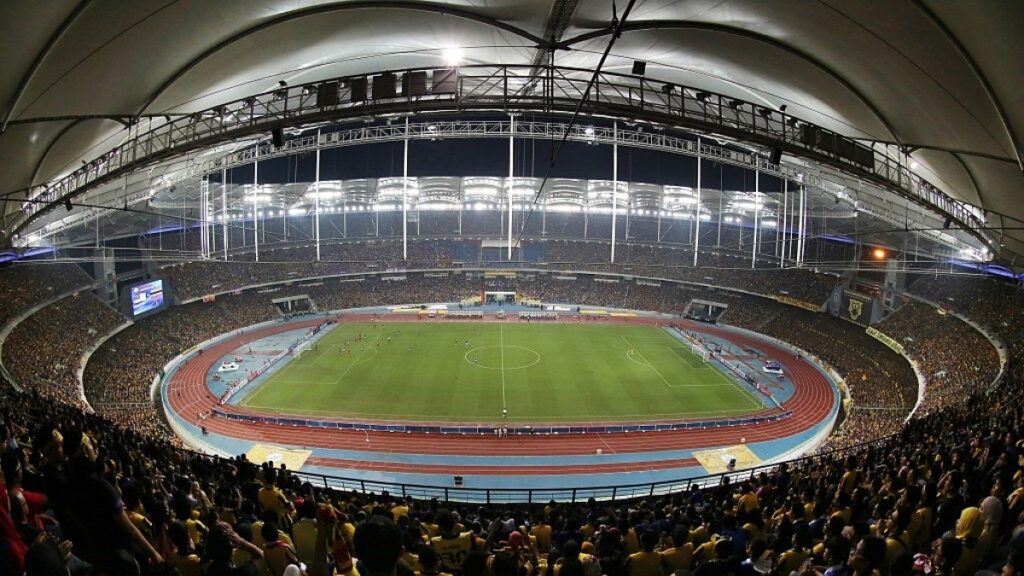 The Bukit Jalil National Stadium in Kuala Lumpur, Malaysia, is the home venue for the national team’s games . The stadium was built in 1997 for the 1998 Commonwealth Games. Also the Southeast Asian Football Championships have been hosted in this stadium several times. An athletics track surrounds the turf field. 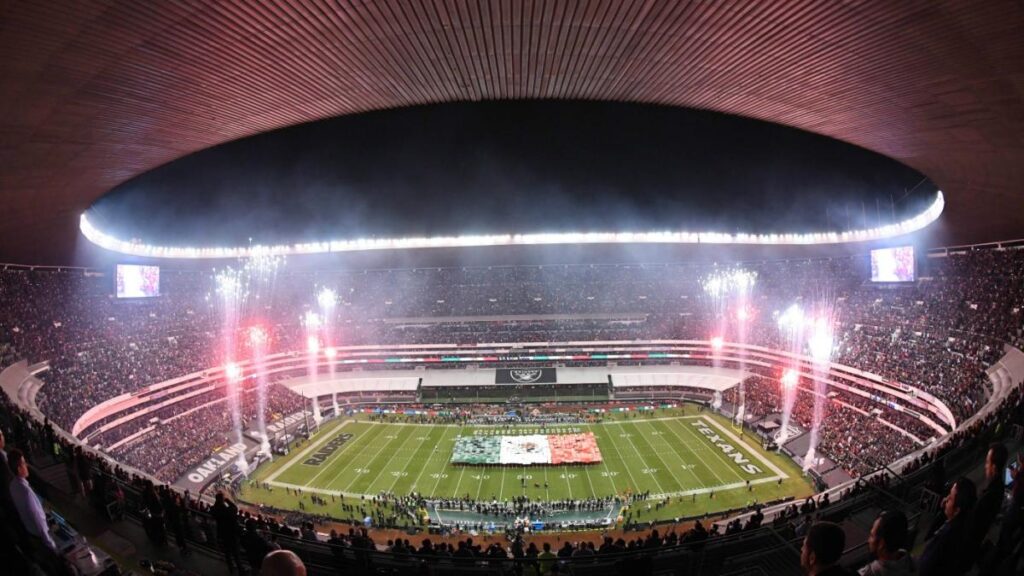 This legendary Aztec Stadium, or in Spanish “Estadio Azteca,” is located in Mexico City. In fact, it was built for the 1968 Olympic Games. The stadium has hosted two World Cup finals, in 1970 and in 1986. Nowadays, Club América plays in the stadium.

The Aztec Stadium was also the host of the 1986 World Cup quarterfinals between Argentina and England, the game in which Maradonna scored his famous “hand of God” goal. Also, the “Game of the Century” match in which Italy won 4-3 over West Germany in extra time in the 1970 World Cup semifinals was played at Estadio Azteca. 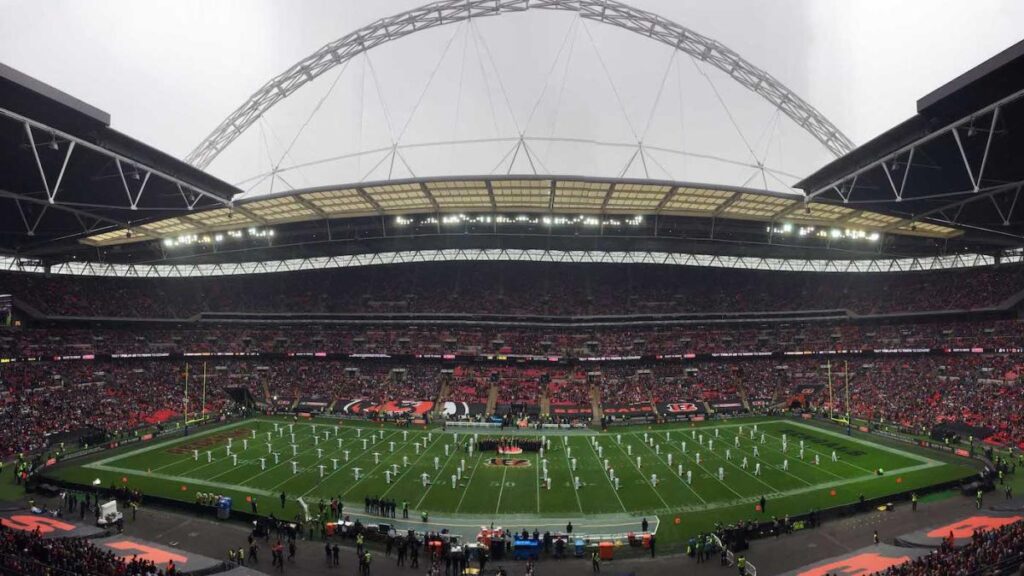 The old Wembley in London first opened in 1923, when it was called the “Empire Stadium”. The twin towers of the stadium were world famous. Between 2000 and 2007 the stadium was entirely rebuilt, at a cost of about 1 billion euros. At that time the capacity was expanded by 5,000 seats to 90,000. Thus it is the largest stadium in Europe that can be covered. This stadium is used for the home matches of the English national soccer team, and cup finals. It also hosts major pop concerts. 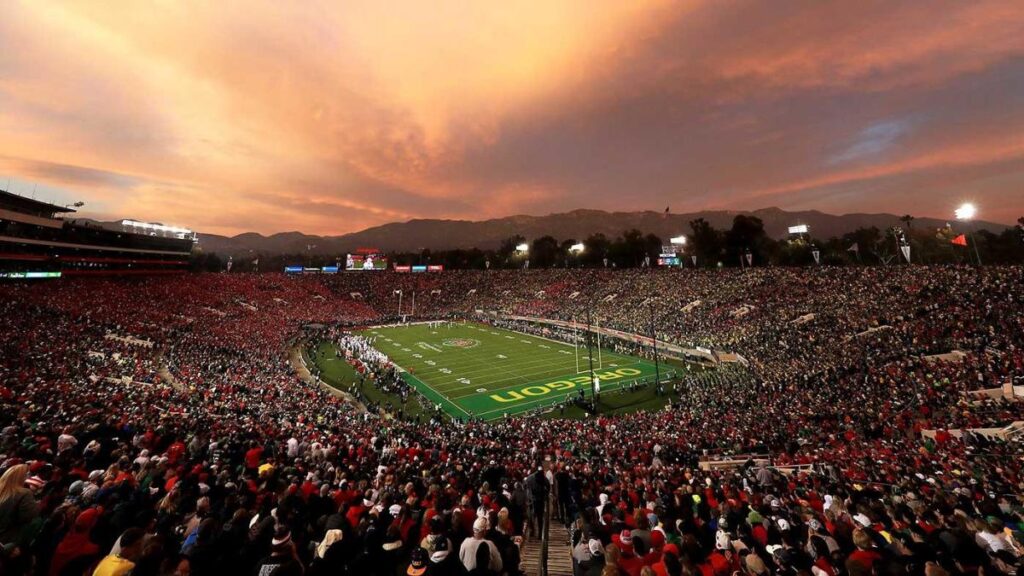 Some might wonder what a stadium from America is doing in this list. After all, we only play American football here, don’t we? Sure, but from time to time this legendary stadium also plays football. These include the 1994 World Cup and the 1999 Women’s Soccer World Cup. Similarly, the Los Angeles Galaxy soccer team played in the stadium since its establishment in 1996 until they relocated to the The Home Depot Center in 2003. It seats a total of 93,420 spectators at The Rose Ball located in n Pasadena, California. 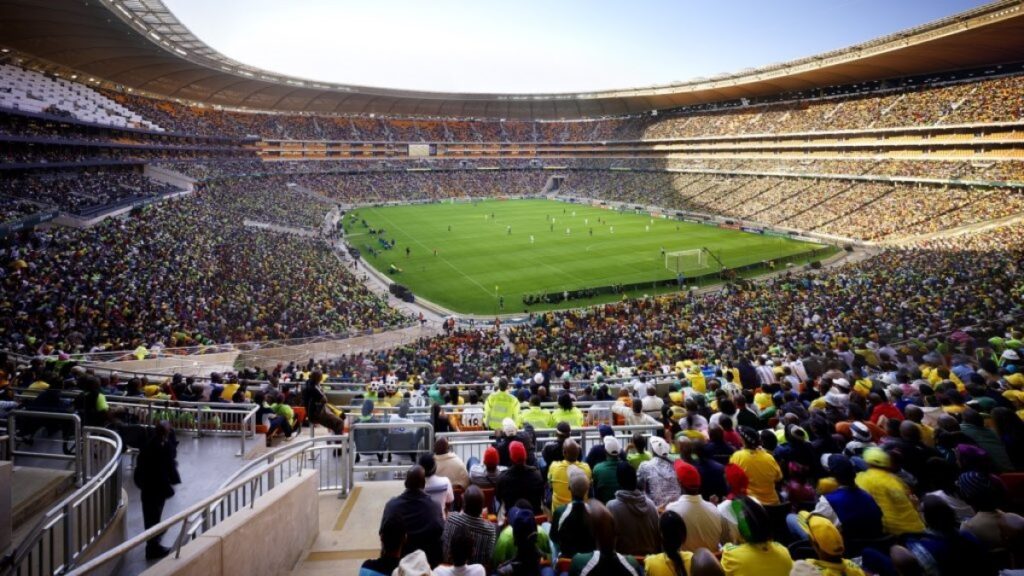 Soccer City, formerly known as (FNB Stadium) was built in 1986. At that time, it had the capacity to hold 80,000 people. However, because of the 2010 World Cup in South Africa, the stadium was entirely renovated and rebuilt, the number of seats was increased to 94,700, among other things. The stadium is home to the soccer team Kaizer Chiefs. 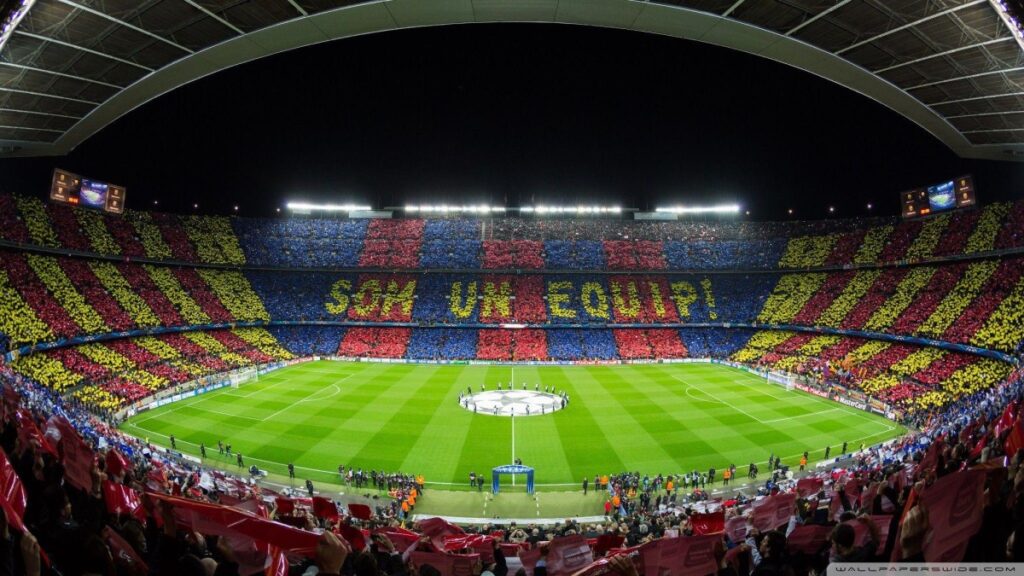 Camp Nou is the largest stadium in Europe, with room for almost 100,000 spectators. Located of course in Barcelona, where FC Barcelona plays its matches. This stadium was officially opened in 1957. Its first renovation took place in 1982 for the World Cup, when its capacity was increased to 115,000 seats. By 1994, the standing areas were replaced with seats and the capacity decreased again to the current 99,786 seats. 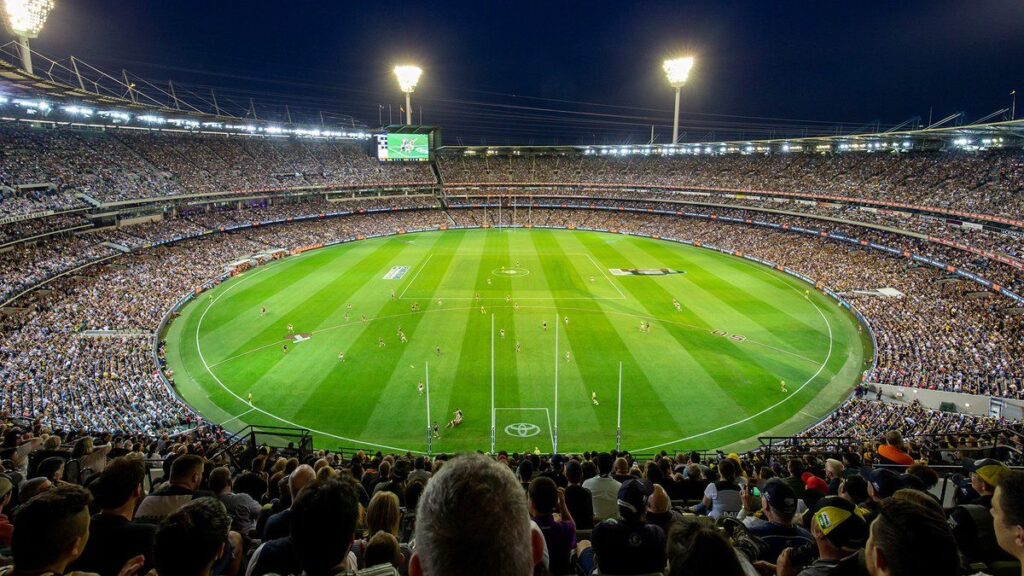 The Melbourne Cricket Ground has a very long history, dating back to 1854. In fact, it is one of the most important and largest cricket stadiums in the world. It was also the main stadium during the 1956 Olympics.

But obviously this is a list about biggest football stadiums in the world, well, it does, Richmond Football Club from Richmond plays its home games at the Melbourne Cricket Ground. Up until the 1970s, by the way, the stadium accommodated 120,000 people, for safety reasons this number was brought down. The attendance record of 130,000, dates back to 1959. 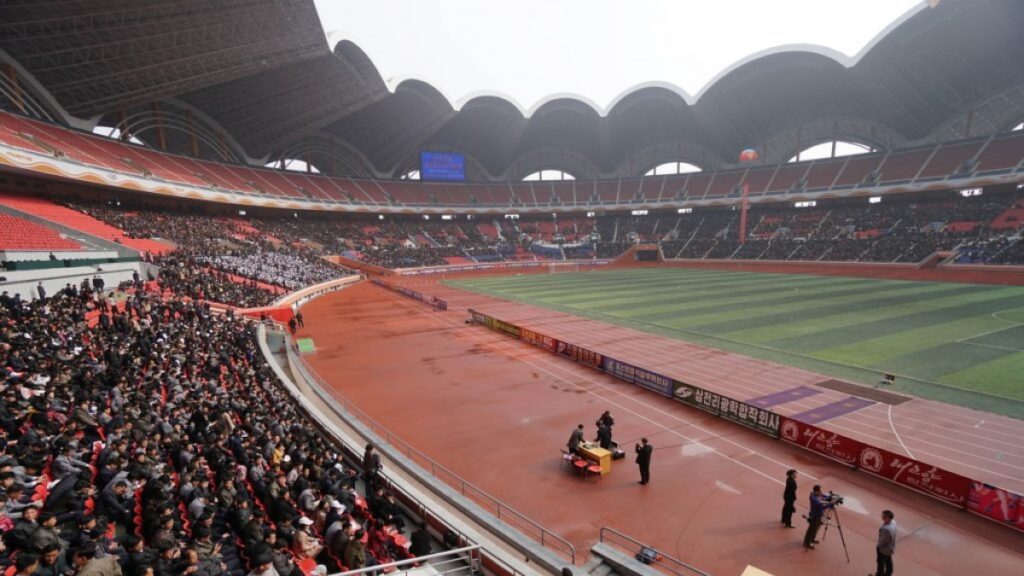 North Korea’s Rungrado May Day Stadium is used primarily for non-football purposes (large military demonstrations and publicly eliminating leader Kim Jong-Un’s opponents), but considering that the national team also plays an occasional game here, it is still in top of the list of biggest football stadiums in the world with a capacity of 114,000!